15 "LOST" Quotes That Will Make You Think

15 "LOST" Quotes That Will Make You Think

The island had a lot more than mystery to offer. 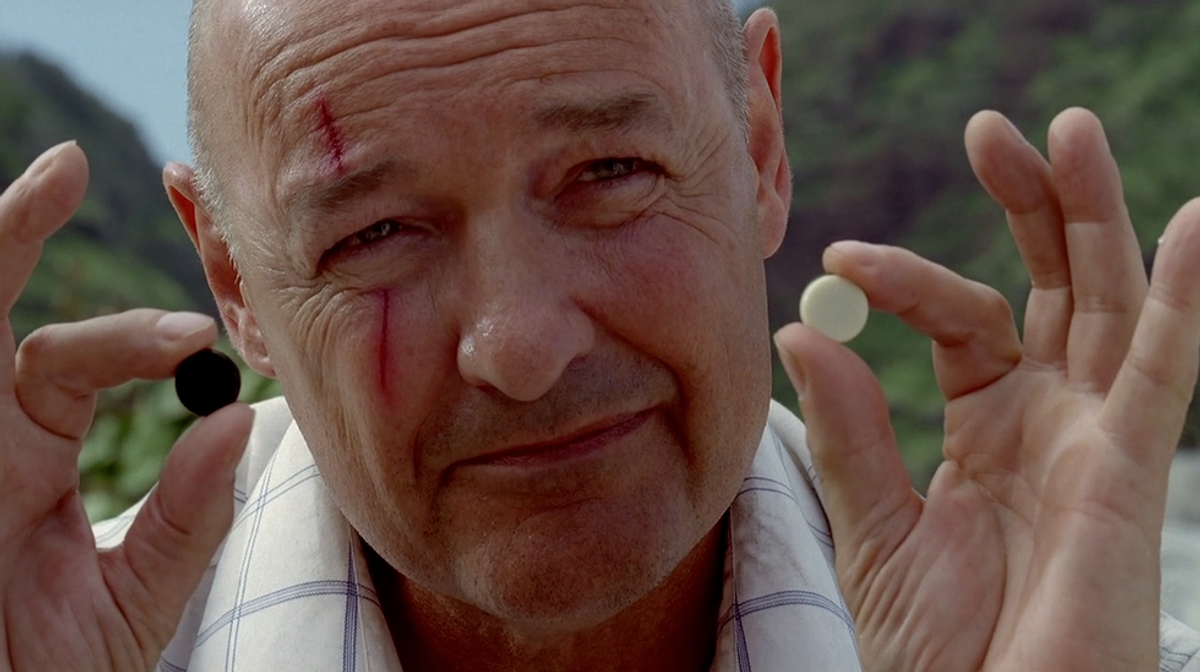 Arguably one of the most fascinating television shows in the last 20 years, "LOST" had so much more to love than it's mysterious inhabitants such as the "others" and the occasional polar bear. Each character was extremely complex and lovable in their own way (...save for Locke's dad, who was basically the devil incarnate). They all had something different to offer, and many of them had oodles of wisdom to impart on their fellow castaways and the audience alike.

Whether you loved the show, hated it, felt a wee bit lost, or didn't care to explore the island at all, here are 15 of the most inspiring quotes in "LOST" History.

Helping Jack through his very first emotional breakdown on the island, Locke reminds jack that it's okay if he doesn't know all the answers all the time. Go out and find the answers for yourself. Wander a bit, get your bearings, and then come back to the problem when you're ready.

2. "So I just made a choice. I would let the fear in, let it take over, let it do thing. But only for five seconds. That's all I was going to give it." - Jack Shephard

I can't tell you how many times I've used this bit of advice from Jack.

If anyone is a close second to Locke's library of wisdom, it's Mr. Eko. Eko did not have the greatest childhood...or adulthood for that matter, but he did everything he could to make a difference when it mattered.

Locke: "It's never been easy!"

The man of science vs. man of faith showdown. Locke has a tendency to talk a lot about fate, or destiny, and it's a bit of an annoyance to the island's resident doctor. This moment from Locke, however, really exemplifies what it's like for many to live a life of faith. Really, really, hard. He's been through so much heartbreak it would be much easier to give up his "everything happens for a reason" mantra, but he holds steady to it in spite of his circumstances.

5. "Stop thinking how ridiculous it is, and start asking yourself whether or not you believe it's going to work. That's why it is called a "leap of faith", Jack." - Eloise Hawking

(It took Jack a lot of convincing to start having belief in something beyond his control) But that's what it is, isn't it? A leap of faith requires a certain amount of doubt. Otherwise, there would be no trouble in jumping.

6. "That's why the Red Sox will never win the World Series." - Christian Shephard

It's just the way it is. This was what Jack's father, Christian, used to say to Jack. It was supposed to say something about "fate", and how things just are. The kicker is they did win one day. Another stepping stone on Jack's path to belief in...anything.

The quote in itself is telling, but doesn't do Terry O'Quinn's delivery justice. For anyone who has felt like they have been left behind, belittled, or rendered useless, John Locke knows your pain. He also overcame all of these things by faith. He struggled, but never gave up.

8. "You see this little hole? This moth's just about to emerge. It's in there right now, struggling. It's digging way through the thick hide of the cocoon. Now, I could help it - take my knife, gently widen the opening, and the moth would be free - but it would be too weak to survive. is nature's way of strengthening it." - John Locke

He struggled, but he never gave up. Locke's analogy to encourage Charlie through heroin withdrawal, but a quote significant enough to help anyone in any situation. God may not take your problems away, but he will give you the strength you need to get through them.

9. "Two days after I found out I had a fatal tumor on my spine, a spinal surgeon fell out of the sky. If that's not proof of God, I don't know what is." - Benjamin Linus

Again, said to Jack. Ben doesn't have the best good-guy track record in the show, but he has some pretty profound moments. (and he's still a personal favorite)

Cutting straight to the heart of it, once again, Locke see's that Jack wants to believe. Everyone wants to believe in something, even if that something is believing there's nothing. Most people, as is the case with Jack, are just waiting for proof. To see something. To know something.

11. "I understand that you live in a world where righteousness and evil seem very far apart, but that is not the real world." - Mr. Eko

I think almost everyone can agree that life isn't as black-and-white as we would all like it to be. While being one of the most wise characters on the show, not to mention spiritual, Eko faced some pretty gruesome decisions during his lifetime. But he did not let them take over his spirit or what he believed in.

13. "All we really need to survive is one person who truly loves us, and you have her. I'll wait for you always." - Penelope

Penny kind of said it all.

14. "You'll understand soon enough that there are consequences to being chosen, destiny, John, is a fickle bitch." - Benjamin Linus

Who here can relate? I think all of us, in a way. Whether it's a school project or literally leading a flock, responsibilities are abundant. Responsibilities in all parts of life, to every person you encounter. Sometimes it screws you over, but almost every time it's worth it.

15. "It only ends once. Anything that happens before that is just progress." - Jacob

Another wise person telling you not to give up, basically.

It's been a long time since I've experienced a show quite like "LOST". While there are many that I love and adore to every last bit, none can quite top the level of spirituality this show tackled. Even without the spiritual aspect, so many of these quotes help me immensely in both emotional healing and inspiration to keep moving forward. Whether you consider yourself a spiritual being, a bit of a dabbler in the philosophical arts, or none of the above, I hope these quotes, in some way, resonate with you as they did me.