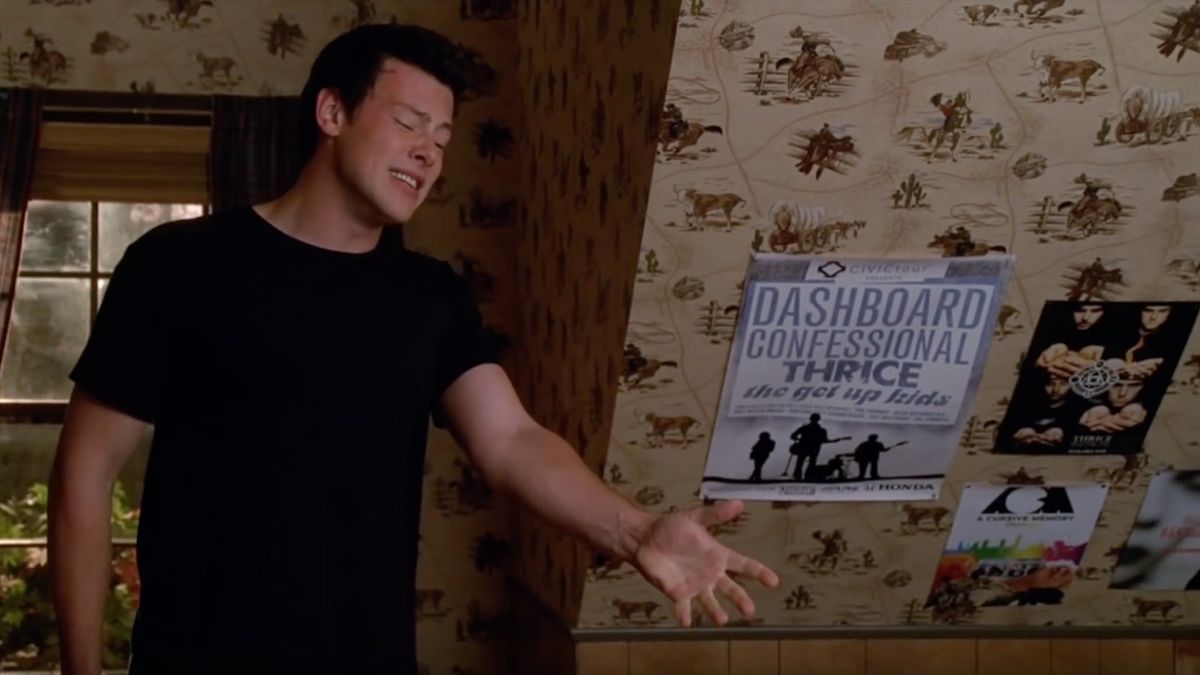 "Glee" has been a guilty pleasure of mine since it first aired in 2009. From the cheesy storylines to the random outbursts in song, I couldn't imagine going through high school without "Glee." I watched it from the beginning all the way up until it's final season in 2015. During my six-week-long winter break, I decided to sit down and binge watch all five seasons of "Glee" (I don't consider season six part of "Glee" given how absolutely TERRIBLE it was). Since Cory Monteith's untimely death in 2013, almost every scene that he is in makes the show 10x more emotional than it was when it was first aired.

So, I have ranked the most emotional "Glee" performances that have made me cry like a baby.

This scene isn't a sad performance; it is more happy and loving since it is featured during Burt Hummel and Carol Hudson's wedding. Finn Hudson openly embraced his new step-brother Kurt and sang this song to him as a way to tell Kurt that he will stand up for him and love him no matter what. Truly a heartfelt scene considering all that Kurt and Finn had been through together before they became brothers. Tears.

This is a very sweet rendition of the song sung at the funeral for Jean, Sue Sylvester's sister. This episode showed us a much softer side of Sue that we never really got to see before. It would be ranked higher on the list, but Jean was never developed enough as a character to really make this moment as much of a gut-punch as it could have been. Wish Ryan Murphy would have shown us more of Jean and Sue.

This moment always sticks out in my mind as an emotional scene. Finn Hudson sings to a sonogram of what he believes is his baby, when in reality, his girlfriend Quinn lied and cheated on him. (But Finn doesn't know that... yet.). Still, it is so sweet how Finn is ready to take on the dad role to help raise "his" child.

Graduation is sad enough as is — did they really have to call this episode "Goodbye"? Regardless, Mr. Schuester gets to deliver a lovely performance, singing "Forever Young" to his departing seniors (Rachel, Kurt, Finn, Quinn, Mercedes, Santana, Mike). It's just so emotional given all the Glee club members have gone through together over the years.

This is more of a hopeful moment than a tragic one — but there's still something heartbreaking about Marley blaming New Directions' Sectionals loss on her eating disorder. And, as with 95% of the other songs on this list, Cory Monteith's untimely death makes it that much sadder in retrospect.

The first performance of "Teenage Dream" on "Glee" was one of the best they ever had. But Blaine's semi-reprise — a heartbreaking breakdown directed at Kurt — is the most emotionally honest the show has ever gotten. Seeing Blaine's face full of pain and guilt for cheating on Kurt really, really hurts.

Florence + the Machine's upbeat rendition of "Shake It Out" is better, but "Glee's" version offers much more emotion, as Mercedes, Santana, and Tina sing to Coach Beiste, who is struggling to leave her abusive husband. It's so hard to watch such a strong-willed character as Shannon Beiste go through so much pain and heartache.

OK, the real reason "Keep Holding On" makes me cry is that it was the song all the eliminated "The Glee Project" contestants had to sing when they were kicked off. I miss that show so much. In the context of "Glee," it's powerful watching New Directions stand behind a pregnant and scared Quinn. The look on Quinn's face during this performance speaks volumes.

This scene is probably my all-time favorite "Glee" scene ever. Not just because we get to see Finn beat the living crap out of Rachel's ex-hooker boyfriend, but because we get to see how much Finn truly loved Rachel. He went all the way to New York just to tell Brody to keep his slimy hands off his future wife. Now this makes me sad because Finn never gets to have Rachel as his wife. TEARS.

"The Break-Up" episode in general was very, very sad, because, well, look at the title. All my favorite couples either broke up or had a really rough patch in this episode — Rachel & Finn, Blaine & Kurt, Will & Emma.

This part in the episode made me cry. Finn brought Rachel to the train station instead of their wedding and told her that she needed to go to New York so she could attend NYADA and live her dreams. He was so sweet, putting her future and her happiness before his own. True love right there. Such a sad scene though, she had to say goodbye to everyone when she thought she was getting married to the love of her life. It's even sadder knowing that she will NEVER get to marry him.

"Glee" hasn't always known how to handle Dave Karofsky, and the attempted suicide was honestly a lot to handle. At the same time, Blaine's stirring performance of "Cough Syrup," with scenes of Karofsky getting bullied the way he once tormented Kurt, is powerful, emotional stuff.

OKAY, these last three performances are dedicated solely to "The Quarterback" episode because TEARS. This was the opening song for this episode, with the entire Glee club wearing black and singing in front of a giant photo of Finn. If you don't bawl when they sing to the giant photo of Finn, you're probably a robot.

Seeing Santana break down while singing this song was so so heartbreaking. Most, if not all, the tears in this episode were real. Knowing the pain these actors were going through at the time is awful enough. It doesn't get much more upsetting.

1. Make You Feel My Love

Regardless if you watched "Glee" or not, you can't deny that there was some deep, emotional stuff built into that musical show.