With plot points so decisive and significant, it's no surprise that this Studio Ghibli film is as poetic as it is captivating. 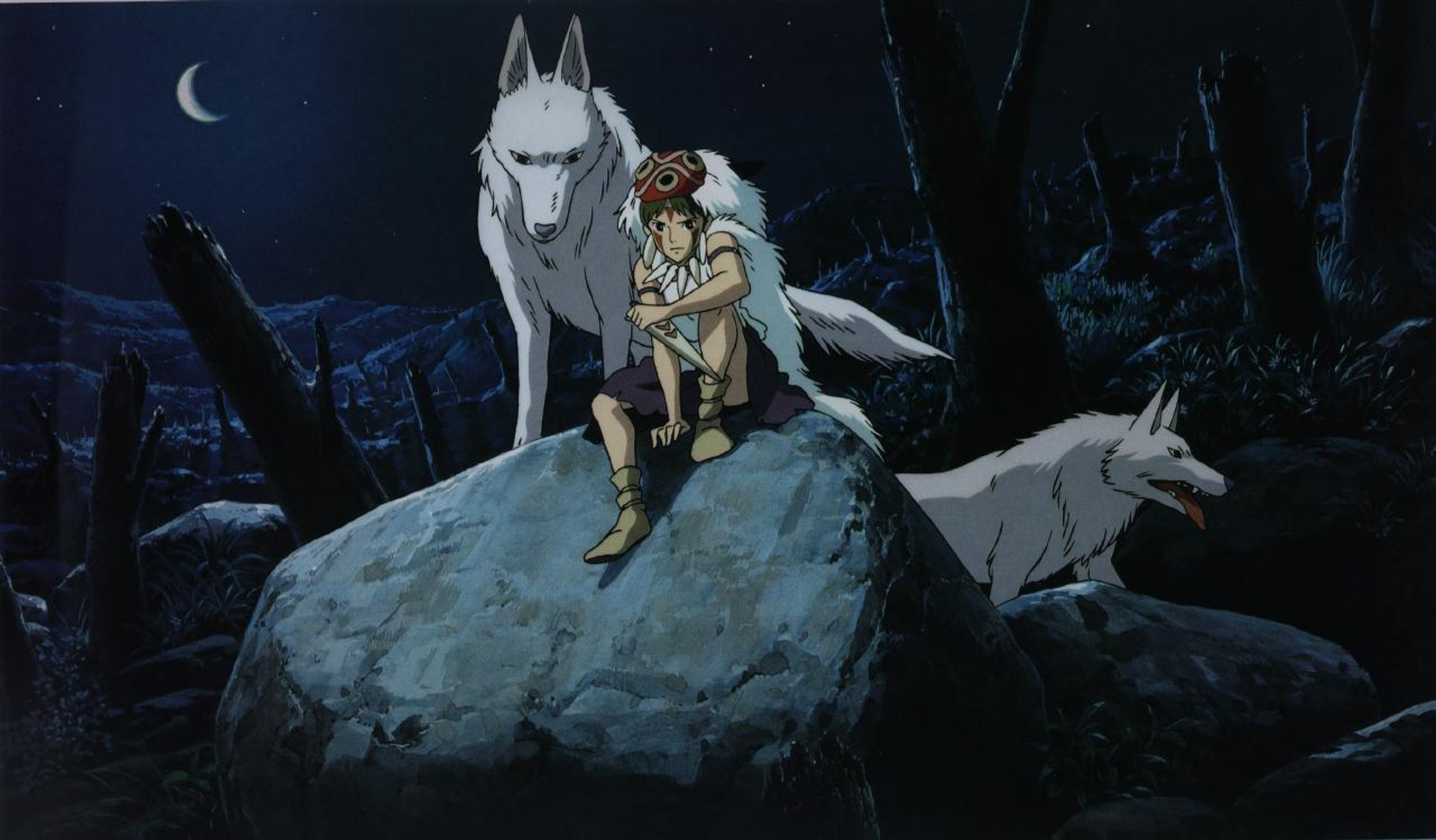 In this article I will analyze one significant reason as to why I love Studio Ghibli's Princess Mononoke so much and why it is my favorite film of all time: its structure. By taking this beloved classic animation , disassembling it, and then inserting it into the mold of screenwriter Blake Snyder's '15 Beats,' a notable approach to writing a structurally sound screenplay, one can both learn about and appreciate just how decisive the story's major plot points are. As I will be discussing crucial parts of this film from start to finish, this article is not spoiler free. Continue reading at your own risk.

The first thing that is shown on screen, the opening image sets the visual and emotional tones of the story.

The audience is introduced to the vast and beautiful landscape that is feudal Japan. Juxtaposed with a brief narration that hints at a destructive conflict between humans and the forest, one might guess that the coexistence between the two is a central topic.

Establishes the protagonist, presents the world that they live in, and also hints at what might be missing in their life.

The prince of a small tribe, Ashitaka is introduced as a caring and vigilant character as he helps direct a group of girls back to the safety of the village when word travels of something strange lurking in the nearby forest.

The precise moment where the story takes a drastic turn, the protagonist is now no longer able to go backward, only forward.

Bursting from the forest emerges a gigantic demon boar that promptly attempts to attack the village. After a frantic battle, Ashitaka emerges victorious—however, not without having his right arm horribly scarred first by the demon boar's toxic body.

In the aftermath of the catalyst, the debate is a crucial moment where the protagonist contemplates what to do and how to do it.

Using her knowledge and intuition as village elder, the Wise Woman tells Ashitaka that he has been infected a curse—one that will eventually tear his soul apart and kill him. Devastated that death awaits their young prince, a number of villagers beg for a solution.

A subtle declaration of the story's central theme, theme stated is often a line spoken to the protagonist as a form of foreshadowing.

"You cannot alter your fate, my prince. However, you can rise to meet it if you choose." Suggesting to Ashitaka that he travel to the West where the demon boar came from to search for a way to lift his curse, the Wise Woman offers this final piece of advice that doubles as the story's central theme.

The story's protagonist makes a pivotal decision that pushes them and the story from the first act into the second act.

Deciding to travel to the West in order to search for a way to save his life, Ashitaka leaves everything and everyone he knew behind.

To help the audience ease into act two from the abrupt end of act one, the B Story acts as a form a relief and renewed direction.


Along his journey, Ashitaka rescues two wounded men from a battle against wolf gods. As he attempts to bring them to safety, they converse about the morality of the forest, which is the faction that the wolf gods fight for. While one of the men believes it is unspeakably evil, Ashitaka thinks otherwise.

8. The Promise of the Premise

Also known as "Fun and Games," the promise of the premise is a time of exploration, character development, and world-building.

Successfully bringing the two men back to their home, Iron Town, Ashitaka learns that the massive industrial town flourishes by cutting down trees in order to dig for iron ore, thus leading to a destructive conflict that pits it against the forest and its animals.


A self-explanatory moment, the midpoint brings the promise of the premise to an end and effectively directs the story to its third act.

Wishing to be a mediator between the two warring factions, Ashitaka does not choose a side and instead prevents the killing of Princess Mononoke, a human fighting for the forest. By doing this, he hopes to find a peaceful solution rather than a violent one.

A representation of mounting opposition against the protagonist, it also symbolizes the rising tension after the midpoint.

Desperately working towards a peaceful solution, Ashitaka's goals are unfortunately threatened when a coalition of soldiers, mercenaries, and hunters are assembled together to kill the god of gods and the forest's leader, the Forest Spirit.

Lady Eboshi, the leader of Iron Town and co-leader of the coalition, decapitates the Forest Spirit with her gun. Without its head, it transforms into a god of death, effectively killing the entire forest that Ashitaka and San (Princess Mononoke) fought so hard to protect.

The protagonist sinks to the lowest point possible. Everything they have gained or fought for is now meaningless.

With the Forest Spirit dying and the forest falling to ruins around them, Ashitaka and San share an embrace as the latter laments "It's over. Everything is over."

With nothing else to lose, the protagonist suddenly gains a surge of determination, giving them the strength to push the story into act three.

In response to San, Ashitaka says "Nothing is over. The two of us are still alive." Alluding to the theme stated back in act one, Ashitaka realizes that he and San, as long as they are alive and willing, can attempt to rise up to whatever challenge is thrown at them.

Pooling together everything they have experienced and learned throughout their journey, the protagonist finally achieves victory.

Catching up with those who planned on selling the decapitated head of the Forest Spirit to the Emperor (who thinks it grants immortality) San and Ashitaka return the head. Although they are too late and the Forest Spirit dies from being separated from its head for too long, its death triggers the growth of grass and saplings among the scarred landscape.

The last visual before the credits, the final image is different than the opening in order to signal dramatic change has occurred.

While it is no longer the thick and full forest which was shown at the beginning, the sight of saplings among the remains of the previous forest instill emotions of hope and optimism.

A really well-crafted piece, Princess Mononoke gets many things right, and among its long list of masterful achievements is its structure. Recently released on blu-ray, along with many other Studio Ghibli films, I highly recommend checking this one out, as it is fairly available at places such as Best Buy and Amazon.

Caitlyn Morral
St Bonaventure University
3771
Wordpress
Odyssey recognizes that mental well-being is a huge component of physical wellness. Our mission this month is to bring about awareness & normality to conversations around mental health from our community. Let's recognize the common symptoms and encourage the help needed without judgement or prejudice. Life's a tough journey, we are here for you and want to hear from you.