14 Things You Definitely Know If You're From Seattle
Odyssey

14 Things You Definitely Know If You're From Seattle

Don't you dare pull that umbrella out. 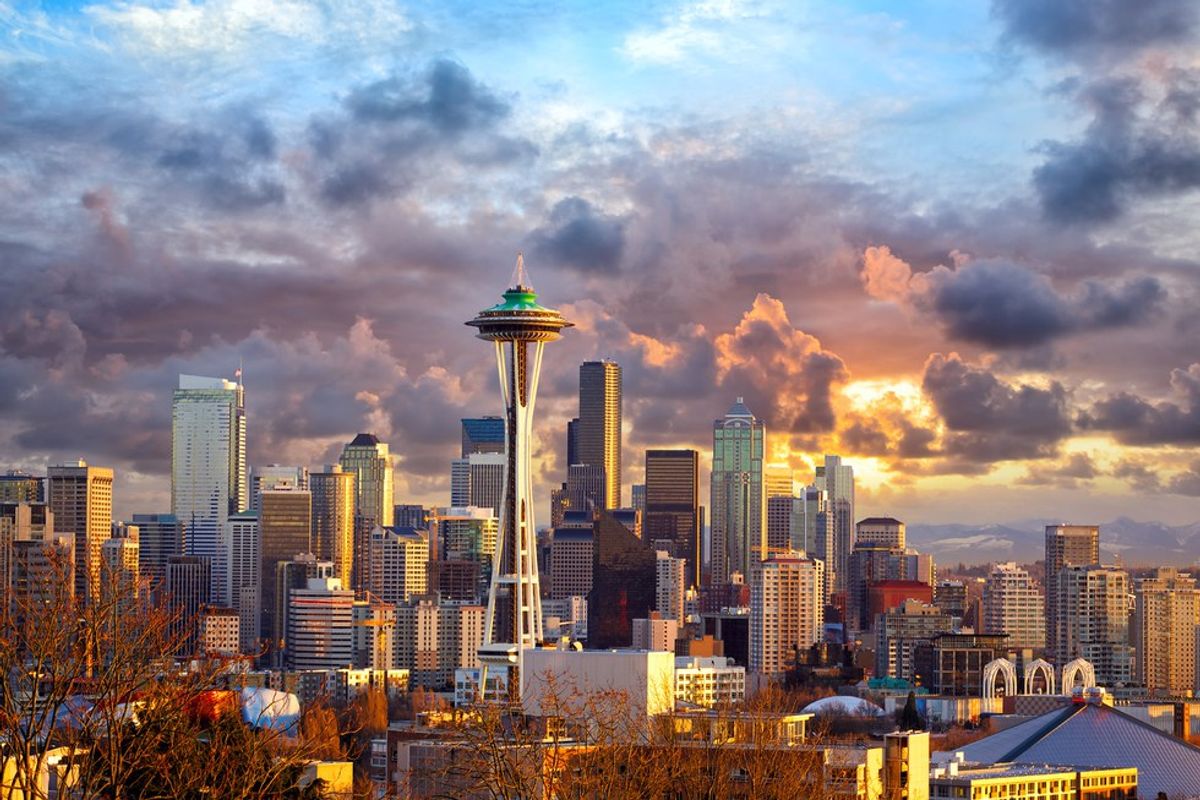 Unless you're from the Emerald City, most of you only know the Seattle you see on "Grey's Anatomy" or "Fifty Shades of Grey." I'm gonna burst your bubble right now: it's nothing like any show/book/movie portrays. Don't get me wrong, it rocks, but it's not nearly as fun and cliche as it looks. Without further ado, here are 14 things that everyone from Seattle knows to be true.

1. If you live on the west side of Washington, you're "from Seattle."

Truth be told, I'm from Everett, WA which is about a half hour from downtown (on a good day). But, you bet whenever anyone asks where I'm from, Seattle is always my answer. Nobody knows about Everett unless they're from the area so it's much easier to just associate myself with the big city living. I once met someone from Forks (yes, the Twilight place, which is almost four hours from Seattle) who said they were from the city which just goes to show that if you're on the west side of the mountains, you're pretty much "from Seattle."

2. You've gone the wrong way on a one-way street.

Unless you live in the heart of downtown (in which case, you probably don't even bother driving), you've done this. It's terrifying, but understandable considering if you're not at a light, there's likely no signage. You just kind of have to know.

3. You've gotten weird looks for saying "Man, I could really go for some Dick's right now."

For those of you who are unfamiliar with Dick's, it's a drive-in burger joint. There are five in Seattle (and one in Edmonds now!!!!) and they somehow manage to keep prices low and quality high day after day. I cannot count the number of times I've gotten weird looks for proclaiming my love for them. I forget people don't know the beauty that is a Dick's Deluxe. Dick's burgers are pretty bomb, but their fries and shakes are what keep me coming back. Disclaimer for the newbies: if you ever visit Seattle, never ask for substitutions. You'll look dumb because they don't do them and you can just save yourself the embarrassment.

Okay, caveat, if you're on your way to somewhere important, then yeah, you need to protect your hair/outfit/etc. but if you're running to the store, it's a waste of time to pack an umbrella, lug it around and get soaked trying to close it. You might as well just admit defeat from the beginning. Also, it doesn't rain here nearly as much as people think it does. I mean, yeah, it rains. And when it rains, it pours. But we also have a lot of really, really beautiful days here.

5. You realize that the Space Needle is just a huge tourist trap.

In all honesty, I had never been up in the Space Needle until a year ago but I'm super angry I paid a whole $27 for it. Total rip. If you're from out of town, yeah sure, go for it. It's a cool cultural thing that is expected of tourists and you get a stunning view of the city but as someone who isn't starstruck by it anymore, I'm pissed at how much I paid to go up into a glorified birdcage.

6. Not everyone is high all the time.

Marijuana is legal for recreational use in Washington state so everyone always assumes the air reeks of weed or something but there are still super strict laws on it. You can only buy and carry so much at a given time and it's illegal to use in public. So, no, Seattle is not just a town of stoners (unless you're at Folklife).

7. We're kind of over Starbucks.

It did start here, but considering there are 104 of them in Seattle alone (not including the surrounding areas), it's easy to get sick of. Another fun tip for visitors: don't go to the first Starbucks in Pike Place. The line will be giant. You will not enjoy yourself. Do yourself a favor and take a picture in front of it and then walk approximately four feet in any direction and you can find another store to get your drink at.

Seattle may be known for its hipsters who avoid mainstream things but we have a whole lot of pride for our teams. Every year, I look at my Mariner's key chain and think to myself it's their year, it's finally gonna go well for them. I'm almost always wrong but will that stop me from going to games? Hell no. We also love soccer and, of course, football. We used to love basketball, too but we won't go there.

9. Big concerts are the norm.

Justin Bieber, Kanye West, Twenty One Pilots (I actually went to this one), Adele and many others have had shows in our city in the past year. Don't get me wrong I love going to school in a small town with a community feel, but it sucks to see all of the concerts going on in Seattle that I know I can't just hop on the bus and go to.

10. It's cool when shows acknowledge us, but they usually get everything wrong.

This isn't just Seattle, but Washington in general. No one knows how to pronounce most of our cities (I'm looking at you iCarly) or anything about the culture of Seattle. But, we do also geek out when we get included in things because we get forgotten a lot up here in the Northwest.

We're leaps and bounds ahead of many other areas in the world. Same-sex marriage was legal here three-and-a-half years before the rest of the country. Also, weed. Also also, we have a lot of diversity. There's an incredible amount of different voices mixing and exchanging and it's so, so cool to see. And this leads me to the next point...

People in Seattle are some of the kindest people I've ever met. There are jackasses, sure, every city has them, but overall, we really try to help each other out. People will likely take to random conversation really well and will make you feel right at home.

13. Pike Place is the one tourist area we don't actively avoid.

Unless it's on a weekend, of course. But fresh flowers, fruit and seeing them throw the fish will never go out of style. My personal favorites are the creepy machine that tells you your fortune and Rachel the 550-pound piggy bank. But forewarning, this is where the dreaded first Starbucks is and, as mentioned before, avoid it.

14. Everything is hella expensive.

Before you jump to any conclusions, no, it's not because of the minimum wage increase. A lot of it has to do with the fact that Seattle can't really expand more than it already has and with companies like Amazon moving in, all buildings/plots of land are hotly contested. Also, there's a lot of support for local/independent businesses which can't lower prices like big corporations can.

Regardless of how many things may seem tedious about Seattle, it'll always be our home and we'll never stop coming back. Because once a Seattleite, always a Seattleite.