11 Ways To Educate Your Liberal Friends About The Second Amendment

It is time to start spreading facts around! 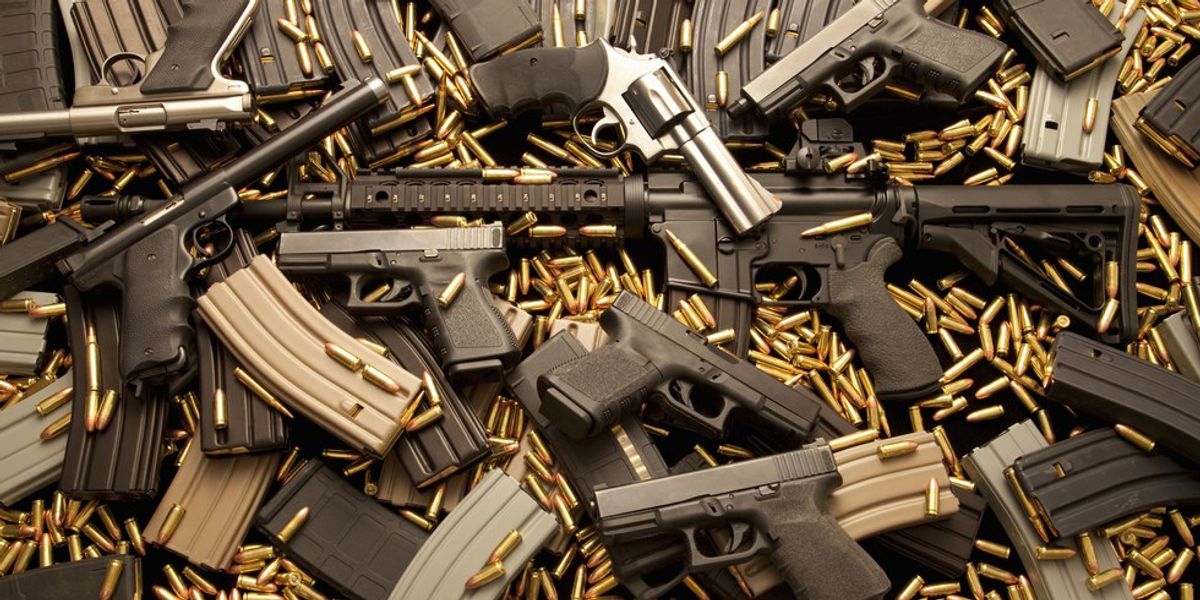 Hi, everyone! After being inspired by the fear-mongering techniques of the RNC, I couldn’t help but feel the DNC’s "hopeful" message in the following week completely ruined everything Republicans worked to get me feeling scared about. And then there was the whole thing on gun control, which I could not let slide. It’s time to educate all of my liberal friends on these "facts" that they are touting!

1. Breakdown of the Second Amendment.

For those of you who like to misquote and incorrectly translate the Second Amendment, I figured I’d clearly spell it out for you. The Constitution says: "A well-regulated Militia, being necessary to the security of a free State, the right of the people to keep and bear Arms, shall not be infringed." Super confusing, I know, so simply put, Americans have the right to bear arms! I mean, you can pretty much cross out all that middle part because it’s super vague, anyway. Blah blah blah regulated militia blah blah blah defense of a free state. I have enough guns in my garage to arm a regulated militia, and I defend the free states all the time!

2. What does Donald Trump say about it?

Where else should we look but to the next President of the United States?

“The Second Amendment to our Constitution is clear. The right of the people to keep and bear Arms shall not be infringed upon. Period. The Second Amendment guarantees a fundamental right that belongs to all law-abiding Americans. The Constitution doesn’t create that right–it ensures that the government can’t take it away. Our Founding Fathers knew, and our Supreme Court has upheld, that the Second Amendment’s purpose is to guarantee our right to defend ourselves and our families. This is about self-defense, plain and simple.”

I couldn’t have said it better myself! The Constitution just keeps those dirty government fingers off of our guns, implying that it is our fundamental human right to own a weapon capable of murdering everyone around us in an immediate vicinity. Why else is every human born with an AK-47 in their hands?

Daaaaw! I remember when my AK-47 was that small!

3. I need an assault machine gun for "sports."

Hunting has always been a huge part of American culture. When our ancestors arrived at this untamed land, they had only their wits, guns and foreign diseases that wiped out the native populations. We must honor these long lasting traditions!

Nothing truly captures that old frontier spirit like ripping into wolves while flying in a helicopter, right, Sarah Palin?

4. What "mass shootings" really are.

Since 1982, there have only been 82 instances of mass shootings. People, that’s not even that many! Granted, the list provided by Mother Jones only looks at shootings with more than four people in public places. The actual number of deaths at the hands of guns is quite higher, where an average of 91 Americans are killed by guns every day, and America’s gun murder rate is 25 times greater than other modern countries according to the CDC, but what do they know? It’s not like they have facts on their side!

5. Gun violence wouldn’t be so high if there wasn't so much black-on-black violence!

Remember, when a white man does it, he was stressed and maybe a little odd. Black people shooting is a gang war, and vaguely Middle Eastern people are terrorists, gun or no gun.

Stacey Dash, an actress who appeared on "Fox and Friends" after the shooting in Orlando, said this in response to crazy liberals and their call for gun regulation: “They’re making us a moving target because bad guys don’t obey laws, so why pass more laws? You’re only stopping good guys from getting guns.”

Exactly right! Never mind that almost all shootings are caused by legally attained firearms, it’s just that the bad people are buying it from the bad stores!

Oh, she also said this, so you know she knows exactly what she’s talking about!

People will kill one another regardless of whether or not there is a gun capable of firing 100 bullets in the span of five seconds in their hands! That’s just human nature

Remember last year? That one guy killed like, nine people with pointy carrots!

8. A happy compromise: Let’s ban people rather than guns!

A quick fix to all the shootings is addressing the people rather than the guns. I propose legislation that will demand harsh and thorough background checks on people before they have to buy a gun! That way, guns can…wait…uh, next one!

9. Our Founding Fathers wanted us to have guns!

I was able to get Thomas Jefferson's ghost into my room to ask him a few questions:

Me: Thomas Jefferson, it's good to finally be able to speak with you!

TJ: Glad to be here, Daniel.

Me: Well, Mr. President, you were once quoted saying: "Laws that forbid the carrying of arms disarm only those who are neither inclined nor determined to commit crimes." What do you have to say to all those fancy liberals that want to take away our guns?

TJ: Well, Daniel, obviously everyone has the right to bear arms, but before we get into that, why are they so upset by it? It takes roughly 20 seconds to reload a musket after one shot, so surely they can't be killing that many people.

*Daniel leans in and whispers in Thomas Jefferson's ear*

TJ: Good God, man! You can kill how many people in 20 seconds now?! How the hell were we supposed to know things would get this crazy? Definitely ban guns in--

Me: Wow, so great, Mr. President, thanks for stopping by!

TJ: By Washington’s wooden teeth! The President is black?!

10. Honestly, not all gun owners are mass murders. #allgunsmatter

Also, completely unrelated to the above statement, immigrants are bringing down our country. #trueamericans #butnotnativeamericans

Besides all of these concrete facts that I’ve just presented, how is anyone afraid of seeing this in a grocery store or in other crowded areas?