If You Would Have Stayed 1 More Year: A Letter To My Boyfriend
Odyssey

If You Would Have Stayed 1 More Year: A Letter To My Boyfriend

An open letter to my boyfriend, whose story closed without a goodbye, but will encourage others to keep writing their own. 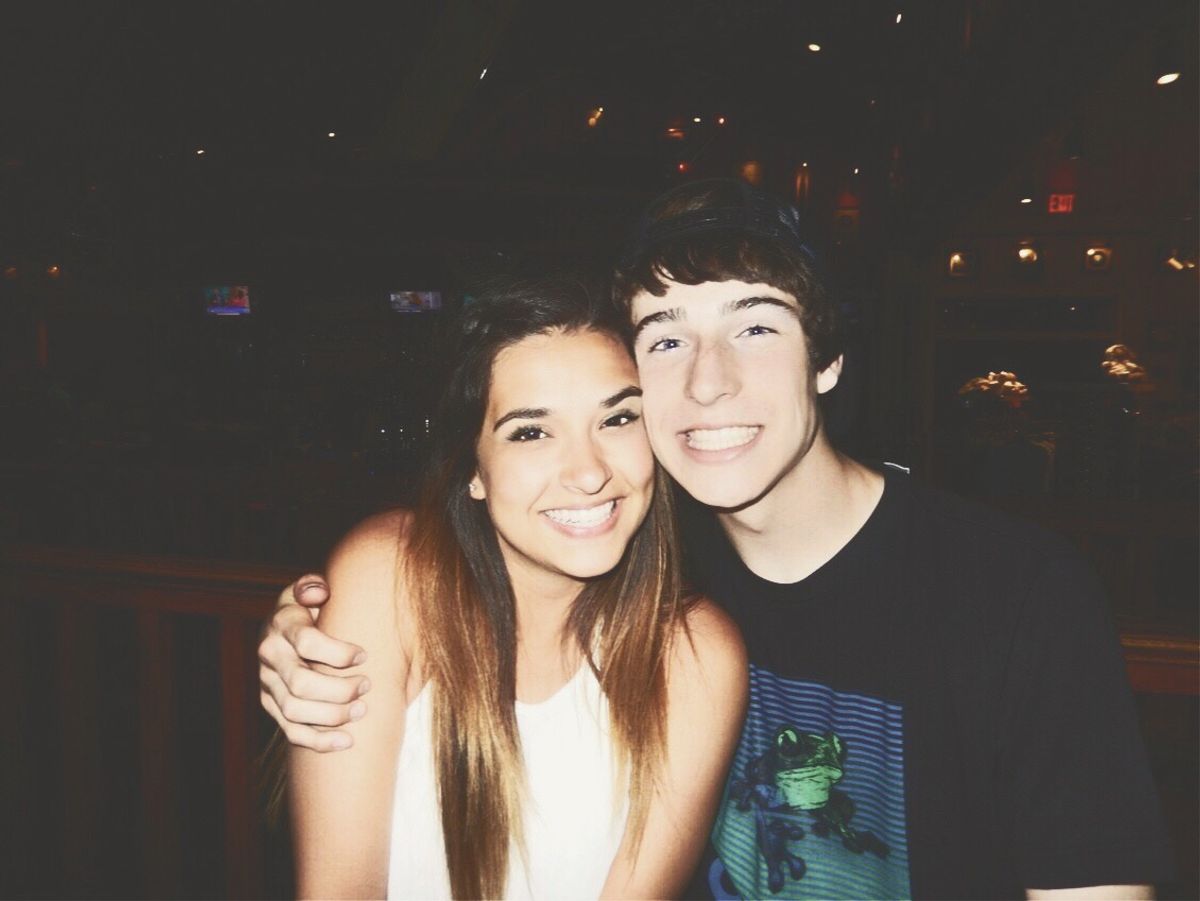 On October 6, 2016 my best friend, my perspective of a perfect person, the brightest light in my life, my first love, my boyfriend, made the only choice he thought he had...

to take his own life at 16 years old.

For me, losing a loved one to suicide has made me wish I could stop time, or better yet, reverse it. But time does not stop for anyone or anything in this world, and looking back on a year with Austin vacant from my life, I realized that I have lived. Now, if you are thinking, “wow that’s great, she is living her life, she is getting better!”— not even close.

The guilt that surrounds a suicide survivor when they find themselves able to live and experience life without their loved one is like a sticky, dark cloud that latches to your back and does not let go.

How can you let yourself enjoy something that your loved one may have enjoyed if they would have just simply stayed?

Bystanders, the people who just want to help you, or even friends and family members commonly don’t understand the process of grieving a death by suicide. They might remind you that “God doesn’t give you anything that you can’t handle” or the biggest lie that “this will get better in time.”

Well, let me be the one to voice that while drowning in the loss of a loved one to suicide, with the most innocent mindset, you question why someone would even believe that God would do something so vicious as to take away your light, you ask why he would even let your loved one feel the demons inside of their head over and over and over again, and “better in time?” – I wish it were that simple.

Anyone who has suffered a loss knows that time does not heal a broken heart, it changes it.

With time approaching the one-year anniversary of his tragic death, I have been thinking a lot about how much one person can really accomplish in a year. Think about how many new people you may meet, how many pictures you might take, and the ways you could physically change in a year.

Though he and I were together for quite some time before my senior year and his junior year, this particular school year was the year that I had lived for less than a month and a half with him living, and over nine months without.

At 17 years old, I lost someone who I thought I would cheer on for two more years from the bleachers of the soccer field, watch graduate in red and white, find a career, buy (a few) more cars, get married, and start a family.

No matter what was to have become of our relationship, I still would be watching him live his life. His family would be there while he goes through all of life’s precious moments, but those moments that “would”, will never.

I will never watch him live his life again, and his family will never have the opportunity to watch him experience some of greatest gifts that life had to offer him.

Since I haven’t gotten to see, or speak to him in a year, I decided to write him a letter.

To anyone who is suffering from a mental illness, has thoughts of suicide, or has attempted suicide, please remember that you are never alone, and you are loved. Taking away your pain may only seem realistic by ending your life, but remember those that love you will carry the pain you leave behind forever.

You have so much more to live for, just think about what you can accomplish in one year.

To the loved one that left by choice,

This may seem like a silly exercise that a counselor might be encouraging me to try out, but it’s not. This is my choice to share the ending of your story, though I wish I could say "our" story. In this letter, my story starts the day that you were freed of your pain but passed much of it on to me.

I know that this was not your intention, you are the most selfless person I have ever met. Six days after you left, you would have turned 17 years old, but there was no cake and no party, just an empty room, and your scent.

Twenty-five days after you left, I tried to go out on Halloween, it was in the middle of a crowded room when I realized none of the faces at the party would be yours. Sometime after October, our volleyball team made it to state, something you said we would do, and my response was just a laugh.

Everyone was cheering and hugging their friends, but I didn’t have your arms to run to and admit that “you were right, again.”

Before Thanksgiving, I was accepted into both colleges that I applied for, but instead of running to your house to tell you the good news, I was running to your mom in hopes of putting smile on her face– none of us have seen it in a while. Thanksgiving was a blur, but you and I are both picky eaters so that's OK.

Eighty days after you left, I celebrated Christmas, my favorite holiday, but for some reason, it didn’t have the same cheer and spark as when I was a little kid. One-hundred and thirty-nine days after you left, I turned 18 years old. My friends and family threw me a giant surprise party, but it wasn’t really a surprise; it would have been if you were there.

One hundred and eighty-one days after you left, I had a minor surgery; you would have laughed and thought I was dying in pain, but I knew you weren’t going to be bringing me a get well gift.

Three hundred and eleven days after you left, I moved away to college, a place where there are no reminders of you on every block in town, 6 hours away from your gravestone, and 397.3 miles away from the last place I saw you.