Poetry On Odyssey: What I Would've Said At The Women's March

Poetry On Odyssey: What I Would've Said At The Women's March

This poem was a look into my life as a woman and how society has treated me. 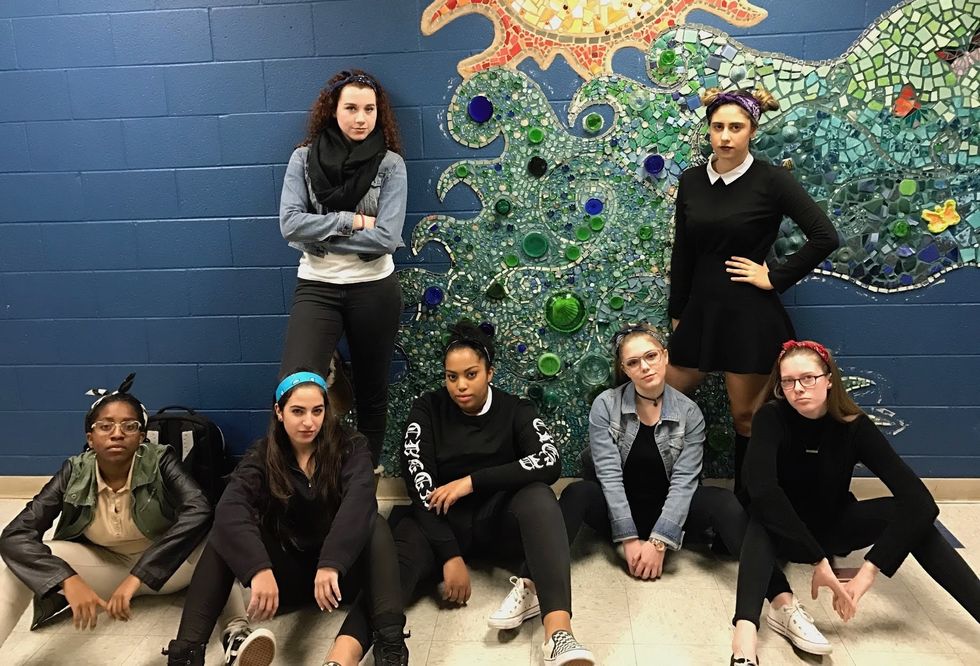 On January 19, there were women's marches all around the country. These women came out to speak their minds and be proud of being female. My mom was one of the coordinators of the march, and it was established that I would be speaking at the Women's March on New Jersey in Trenton.

Reciting a poem I wrote myself. This poem was a look into my life as a woman and how society has treated me. I used the intersectionality of being a woman that is not very feminine.

Sadly my Saturday was not spent marching, but instead in a car on the way back to school. Governor Phil Murphy had declared a state of emergency for all of New Jersey that would start at 12 o'clock. Sadly, that would be right in the middle of the march.

So that officially made the march supposed to happen in New Jersey canceled. The march still happened in other places though, I saw posts from my friends taken at the marches they attended (in other places in the world). I thought that I would be a good idea to share my poem I was saying somewhere, so here is what I would've said at the Women's March.

80 cents for every dollar a man makes.

You tell me to work harder,

To make my ideas sharper,

And it's a piece of cake.

But how easy is the cake when I don't have the recipe?

How easy it is to get a job when you know my name and not the rest of me.

My name is Frankie, commonly known as the name of a boy.

The opposite of estrogen, domestic, feminine, and coy.

I was the girl that liked action figures, I played sports, I liked to win.

I wasn't the girl that wore skirts, liked pink, and I wasn't thin.

You see in school I got picked on because of how I acted and how I lived.

I didn't shave my arms or my legs,

People often made jokes I was the hairiest boy in our grade.

Was I less of a woman because I didn't wear makeup or shave?

Or was I more of a woman because I never backed down or caved?

I know strong women who have gone through hell and back without showing any fear,

So how come the minuscule comments could bring me to tears?

I have been told to stay quiet,

I've been told to stand down.

I've been told to keep my head on my shoulders,

And my feet on the ground.

But I like being in the clouds and letting my ideas soar.

I like that I have strong women behind me, who tell me to chase more.

I strive for greatness, I want to be the best.

I won't let someone differ me just because I have more weight on my chest.

I'm not like most girls, or so I've been told.

But I think they just never noticed how all girls are bold.

We speak our truths and fight for what's right,

It should never be a matter of skin whether black or white.

Black, white, brown and all colors in between,

At the end of the day we should all be on the same team.

I think all women deserve the power to speak.

To know their words have traveled and reached someone that day.

From The Women's March Last Year in BaltimoreAuthor's photo

Thanks for enjoying this poem that nobody asked for. I hope you enjoyed it and maybe you learned a little bit more about me.

9 Study Tips To Help You Succeed This Semester

We could all use a little help.

Unfortunately, the time is here. It is officially the spring semester, and you know what that means: lots and lots of studying. If you are in the same situation I am, then you are probably doing your 3rd semester of online/hybrid school. Not being at school or not attending classes in person definitely makes learning and studying a lot harder. Because I know this struggle all too well, I put together a list of study tips to hopefully help us all succeed a little more this semester.

Looking for a gift idea for your long-distance Valentine's date this year? Here are some creative, thoughtful gifts for you!

As Valentine's Day approaches, I realized that it's the first Valentine's Day I have had with my boyfriend that we're more than 6,000 miles apart. Despite the distance though, my mind has been reeling over what to get him, as one of my main love languages is gift-giving. So here are some ideas that I've seen that I think would be perfect for any relationship, whether you're together or apart.

21 Truths To Manifest In 2021, Because Your Thoughts Have More Power Than You Know

Each and every day, we have a choice. Make it a good one.

To be perfectly honest, I wasn't sure how to write this article.

We text all the time, so it's no surprise you may find yourself wanting to pick up your phone even when you're driving.

You're driving to the grocery store when your phone buzzes in your pocket. You instinctively reach to check it, but it can wait until you park. These are eight statistics to read before you text and drive because they'll change how you view your time on the road.

Everyone's made the mistake of looking at their phone while in the driver's seat, but not everyone gets home safely afterward. Learn why it's better to avoid distracted driving so you don't become one of these statistics this year:

Even at my lowest, the number on the scale never seemed low enough... but was it ever worth the risk of losing my life?

Trigger warning: This article discusses topics that may be triggering for some readers.

I looked down at my thumb today. I know haven't been eating enough. I told everyone I would get all my vitamins and calories in. I totally wanted to eat more of the guacamole I bought the other day, but I counted what I had eaten and those numbers seemed a little too high. I decided I didn't need the extra helping, so I went to bed and the guacamole went bad.

Hey, Guess What, My 'Useless' Degree Actually Makes Me Money

Acting school wasn't a waste of time or money, Dad!

When pursuing a degree that most deem 'useless' or a 'waste of time' there happens to be a lot of self-doubt and fear, especially with the pending doom of graduation around the corner. I remember when I was about to graduate from college with a Bachelor's in Acting, I was absolutely terrified.