Why I Still Watch Pixar Movies At 25
Odyssey

Why I Still Watch Pixar Movies At 25

Pixar is just as magical as Disney. 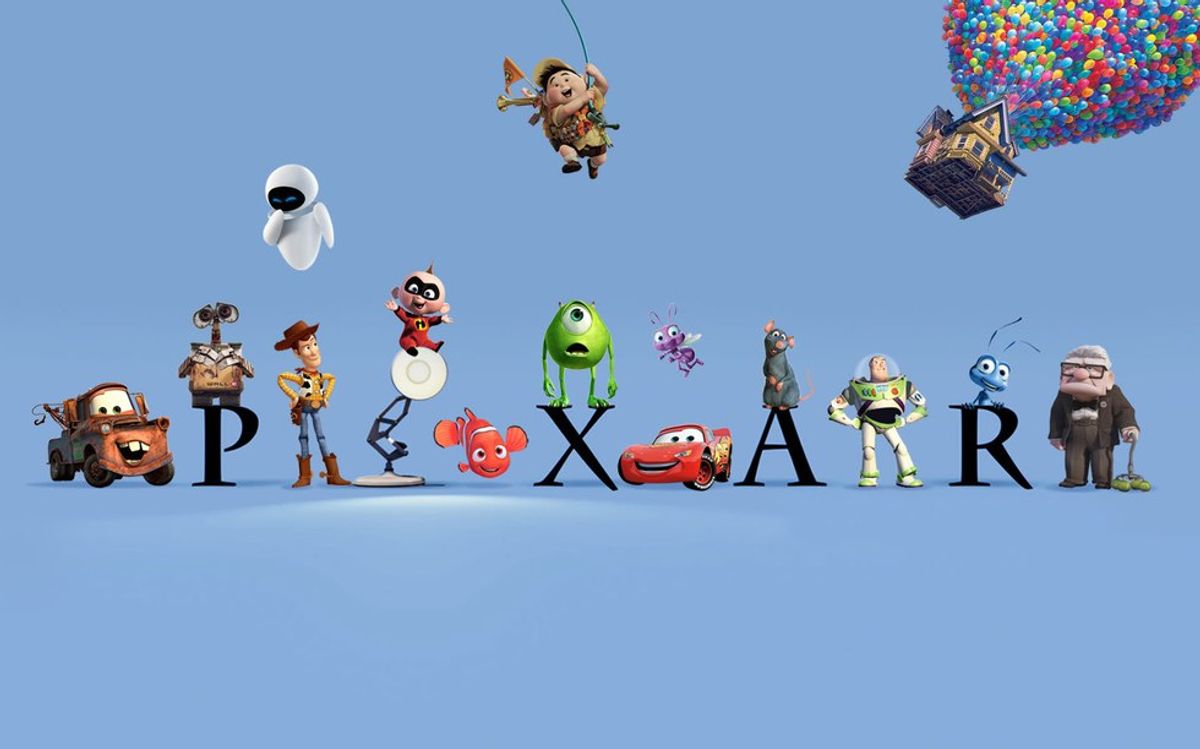 This weekend marks the release of the 17th animated film by Pixar Studios. It is amazing to think that Pixar has been around for almost 22 years now, and in that time have created some of the greatest animated films of the past two decades. They were the first to utilize computer technology to create 3-D animation, and they remain the masters of the form. Since I first saw "Toy Story" in 1995, I have always had a special connection with Pixar movies. I have seen every single one of them in theaters and I have a very specific ritual when I see them. I always see them on the opening weekend and I must always have a large Coke, small popcorn and a box of Reese’s pieces. This is the snack that I’ve had with me every single Pixar movie I’ve seen and you can be sure that all three of them will be in my hands when I see "Finding Dory" this weekend.

Despite now being 25 years old, I still feel a connection with Pixar films that are overly unique unto them. I’ve always been a cinema file and I have a great love for many different kinds of films, but animation has always been a particular interest of mine. And Pixar animation specifically has always been very close to my heart. I feel like I grew up with that company, as strange as it might sound. I’ve seen their entire output, not just feature films, but also their short films and the myriad of experimental shorts they’ve created over the years. I suppose to you could almost call me a Pixar-fanatic, and I’d be fine with that label.

Is it strange that a 25-year-old man still feels so strongly about a film studio whose output is marketed mostly to children? Well, I would argue that while Pixar films are considered by most to be “kids’ stuff," that isn’t a very accurate description. They are family films. Real family films. Most family movies are targeted to a younger crowd, but true family films are meant to enjoyed by everyone of every age at a different level. As I grow older, I find myself enjoying Pixar films for reasons different than I did when I first saw them. When I saw "Monsters Inc." as a child, I was entertained by the characters, their humor and the slapstick comedy, especially Mike. Seeing it now, what most interests me are the parallels it creates between the human world and the monster world, and how it shows fear is much more complicated than simply things being scary. Fear comes from misunderstanding and the things we cannot understand, and fear of perceived monsters can sometimes distract us from the real monsters that hide in plain sight.

The greatest works of art are the ones we connect to an emotional level that is solely between ourselves and the work itself. What I mean is that we share a special connection to the piece that no one else does and that no one else could understand. I feel this way about almost every Pixar film I’ve seen. They all speak to me in different ways. Though some are obviously more strong than others (I have never felt the need to watch "Cars 2" more than once), they all still have those moments that tug at the heartstrings in ways only Pixar can, and that few other films dare to attempt.

No film has made me feel the weight of age like "Up." No movie has made me look closer at the world beneath my feet than "A Bug's Life." What I can always expect from every Pixar movie I see is a new perspective. Pixar is often made fun of for their formula of taking objects or things and showing the world through their perspective. Showing the world through the eyes of a child’s toys, or the dangers of the sea through the experiences of fish. Perhaps that is why the "Cars" films aren’t as effective. Rather than show our world through the eyes of the cars, Pixar built for them their own reality. It’s more difficult to relate to a world other than our own.

What is it about the Pixar style of filmmaking that speaks to so many of us? The most obvious answer is the craft. If there is one trait that all Pixar films share, it's an unprecedented level of polish that few other films can match. Every aspect of Pixar’s movies is tuned to absolute perfection. The animation is flawlessly rendered - a level of detail that borders on the obsessive. The balance between humor, action and quiet moments is almost always pitch-perfect. The secret to Pixar’s continued level of quality is that every aspect of the film is planned carefully for complete maximum impact. But I think what truly gives Pixar its “touch” is the heart and soul of their films.

Pixar movies make me feel like a child again. Not in a nostalgic way. Nostalgia is merely memory of experiences I have already have. When I say that I feel like a child when I watch a Pixar movie, I mean that I feel a sense of newness and discovery. As we grow older, the world seems to get smaller, but when we are young, the world seems almost incomprehensibly big. When I see a Pixar movie, the world grows back to that unfathomable size again. I see and hear things I couldn’t have imagined before. This is something all great art does - and it is what Pixar excels at.

I was raised on Pixar movies. They taught me things that even as an adult I still need to be reminded of now and again. That we cannot walk this world alone, to see things from new perspectives, and that there is beauty in the smallest places. When I see a Pixar movie, I become happier, and I feel refreshed. That’s not something that can be calculated - that is something more. I can’t say where it comes from. Perhaps it comes from those small moments in Pixar films. One of my all-time favorite scenes in a Pixar film – in any film, actually – takes place in "Ratatouille." Remy, a rat who longs to be a chef, is trying to fix a stew ruined by the human chefs. He loses himself in a ballet of movement and mixing ingredients. Then the lights in the kitchen come on. The garbage boy, Linguini, stares at the bizarre sight of a rat cooking. Remy stares back, but opens his paw, and drops in the last bits of ingredients. Despite being caught and in mortal danger, he still feels the need to finish his work. It’s a truly human moment. And that is what true art is - a human moment captured for eternity.