Why I Hate "Coexist" Bumper Stickers

It's never going to happen. 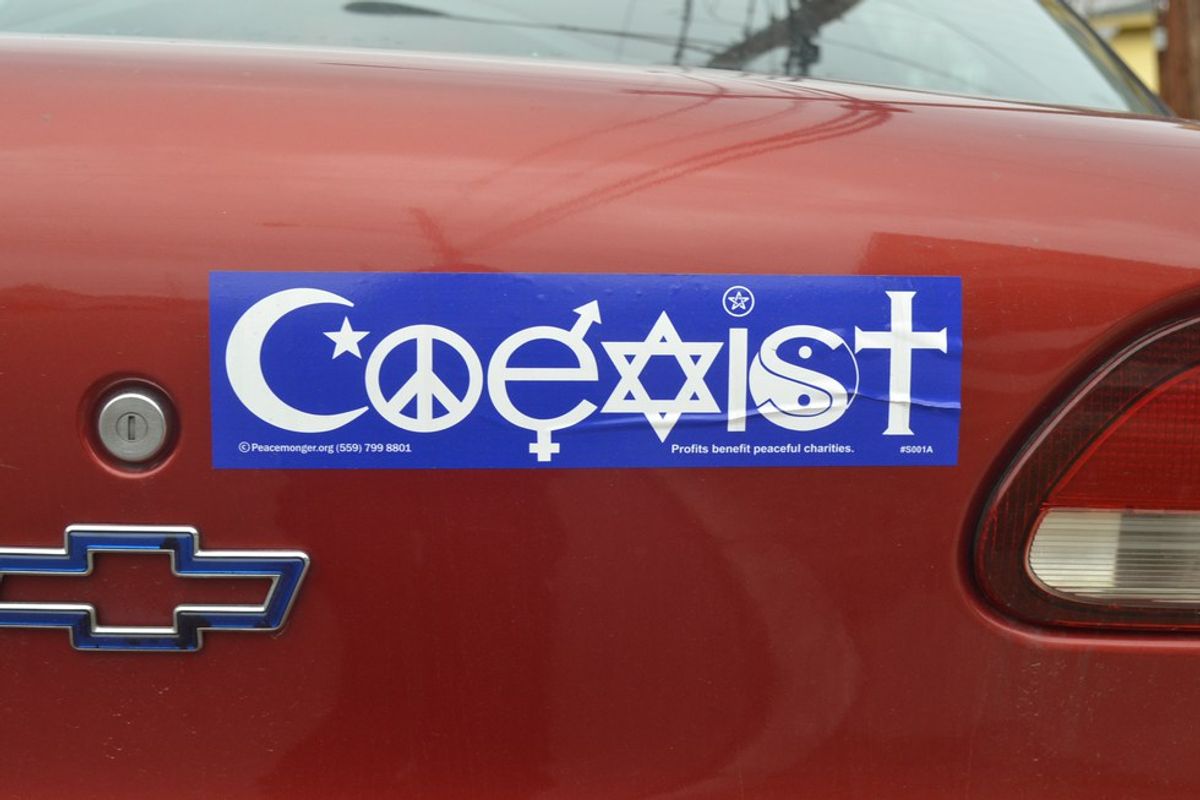 I’ve seen a lot of bumper stickers that say, “Coexist” with each letter an archetypal symbol of a different worldview or movement. If you are not familiar with them, or have seen them but don’t know what each symbol means, let me break it down for you:

The ‘C’ is a symbol for Islam.

The ‘O’ is a symbol for Pacifism.

The ‘E’ is a symbol for gay rights/gender equality, depending on whom you ask.

The ‘X’ is a symbol for Judaism.

The ‘I’ is a symbol for Paganism.

The ‘S’ is a symbol for Taoism.

The ‘T’ is a symbol for Christianity.

The main idea behind these bumper stickers is that no religion or movement is above the other, and that we should all, well, coexist. Despite having differing religious or worldview backgrounds, we should all strive to coexist with one another.

Honestly, I hate this bumper sticker. It’s not because I’m a stuck-up, hypocritical Christian. I hate it because it is impossible. We cannot attain coexistence with one another and we will never be able to. It's against our nature and seeing the sticker only serves to remind me of its absurdity.

If the bumper sticker means to ask that we all live and breathe the same air, coexisting as humans, then congratulations, we’ve been doing that since humanity’s existence. Yeah, we have people who murder others, but that’s not the point of the bumper sticker. If it were, it would say something more along the lines of, “Please stop murdering one another.”

The reason the sticker doesn’t say this is because its implication is different. Its implication is, “I don’t care if you’re Christian or gay or Jewish or Muslim, you should all live as if there weren't any differences between us.” Even further, this statement in and of itself is not capable of living in coexistence. By stating that we should all coexist, you are not living in coexistence with someone who disagrees with you. Everyone, according to this bumper sticker, should agree with the bumper sticker. Which, obviously, people don’t so you’re left with an inability to coexist.

Typically, what I’ve observed, is that the one who suggests we should all coexist doesn’t care about religion or hates it when someone’s religion dictates how that person lives and guides their ethic compass.

Let me give an example.

Well, I hate to break it to you, but to tell the Christian that they need to coexist, you are forcing them to give up their personal belief to fit your own. Which is completely antithetical to the meaning behind “Coexist.”

Even on a different level, leaving religion aside, we will never be able to coexist, all agreeing on every issue because we are all human. Not a single one of us is the same as any other. We all have a different way of viewing the world. Each perspective is as different as the individual is from one another. We will never be able to coexist as the bumper sticker would like us to because we will always disagree on something, whether it be politics, interpretations of classic literature and its symbols, how to solve math problems, or what is better, DC or Marvel. We will always have differing opinions on everything.

Coexisting, as the definition says, “exist at the same time or in the same place,” has been happening since the dawn of man. So congratulations if you desire for us as humans to live together on the same planet at the same time. We’ve managed that. But if you want people to disregard their religious or worldview assumptions, I’m sorry, that will never happen so we might as well stop trying to force people to do it.