Who Is Vermin Supreme?
Odyssey

Who Is Vermin Supreme?

The political candidate you've never heard of but need to know. 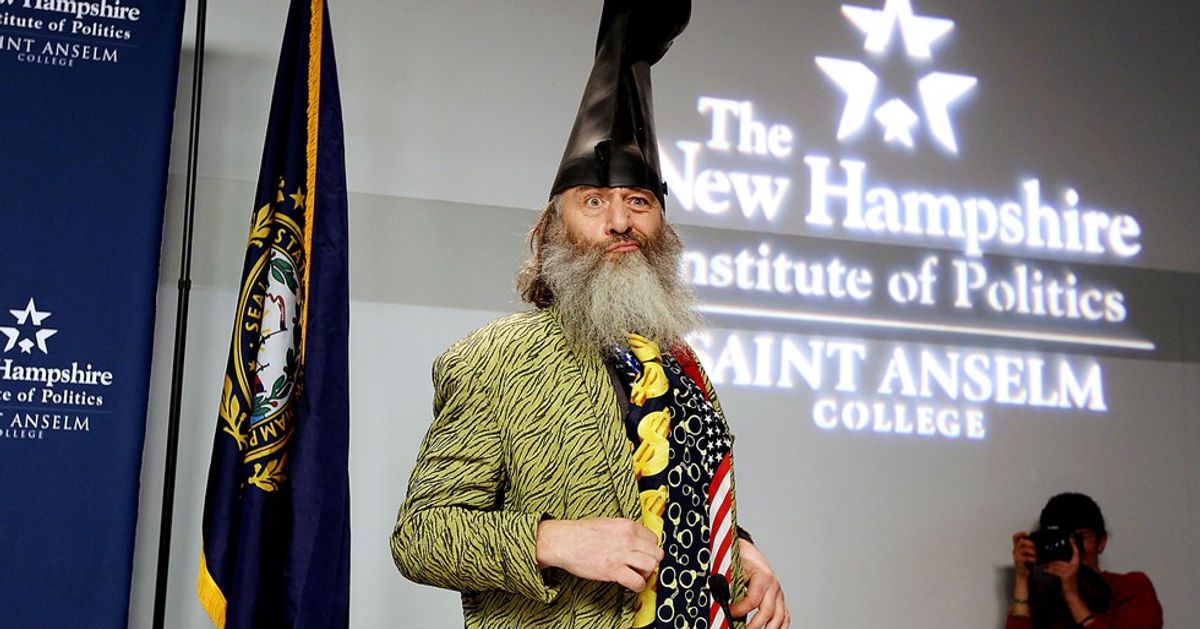 We've all heard of Bernie Sanders, Hillary Clinton, and Donald Trump. But how many of you have ever heard of Vermin Supreme? In regard to the upcoming 2016 Presidential election, the focus is mainly on the popular Democratic and Republican candidates we see in the televised debates. Despite that, there are dozens of other less popular candidates running for president -- including Vermin Supreme. According to his Wikipedia page, Supreme is a performance artist and political activist from Massachusetts. He is most famously known for wearing a boot on his head and advocating for a "pony-based economy," as well as a mandatory toothbrushing law.

Although he is not as well known as others running for office, his name alone sets him apart from all other candidates. In regard to his name he states: “All politicians are, in fact, vermin. I am the Vermin Supreme; therefore I am the most qualified candidate."

Supreme has been involved with politics for several decades. His political career began in 1986 where he joined the Great Peace March for Global Nuclear Disarmament in protest of nuclear weaponry. Two years later, he began running for office in local, state, and national elections.

Just last month, Supreme filed as a Democratic candidate for the New Hampshire primary. This is not his first time running for President, though, as 2016 marks his seventh election. Throughout his political career, Supreme has been active on both Republican and Democratic platforms. He will be embarking on a 20-city tour in his campaign for 2016.

In 2012, he founded the Free Pony Party. If elected, Supreme promises every American a pony. With regard to his free pony policy, Supreme remarks: "Free ponies for all Americans, one of the overlooked issues in America today. My free pony platform is of course a jobs creation program. It will create lots and lots of jobs once we switch to a pony-based economy. The economy will also lower our dependence on foreign oil."

With his slogan, "Strong teeth for a strong America," he advocates for mandatory toothbrushing laws for Americans. "For too long, gingivitis has been eroding the gum line of this great nation and must be stopped. For too long, this country has been suffering a great moral, and oral, decay in spirit and in sizers... A country's future is based on its ability to bite back."

Pictured here (left) with his giant toothbrush alongside Jimmy McMillan of the Rent is Too Damn High Party.

Twitter users voice their support for Supreme with the hashtag #VerminSupreme2016. A lot of people are expressing excitement about the possibility of getting a free pony, including six-year-old Avery.

Even though his platform is unconventional, Supreme does have a point. He may seem insane due his crazy antics, but his mockery of the political system resonates with a lot Americans.

In an interview, he said: "When President Obama got himself elected on the promises of hope and change and not being able to deliver on that, it created a vast group of youth who are totally disillusioned with the politics because they have been promised something and they didn't see it coming...It just struck a nerve and I blew up."

He believes that through his humor, he is addressing real, serious issues with the American political system.

"Remember," he says, "a vote for Vermin Supreme is a vote completely thrown away."