The signs I saw at the March For Our Lives rally, and the conversations they started 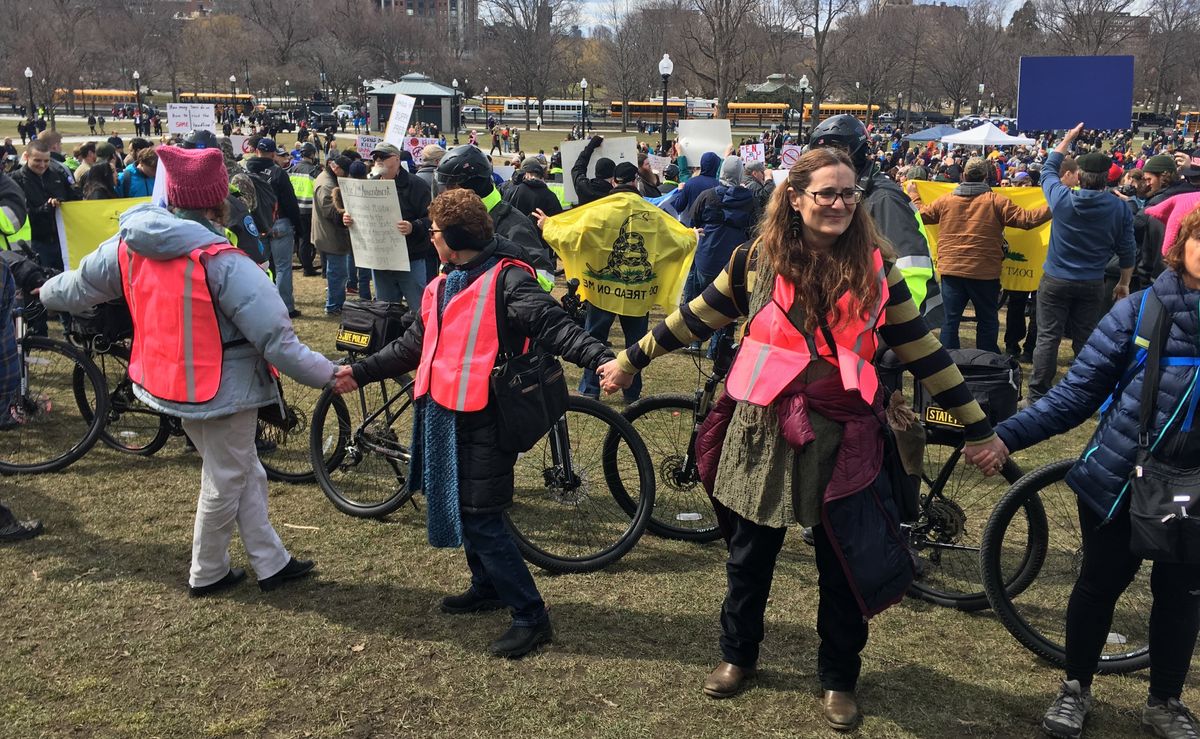 A little over a week ago, I attended the March For Our Lives rally in Boston with a group of the Wellesley Democrats. As soon as we crested a hill of the Boston Common, we were met with an enormous crowd of thousands, which would only grow throughout the day. Close by was a small opposition group encircled by (1) State Police, (2) their bikes, and (3) a group of elderly men and women in neon pink vests, who told others they were “containing” the other group's hatred, while also preventing other attendees from breaking the line or inciting violence. It was admirable, but it did not stop the barrage of arguments that continued for several hours until the opposition group (men – and a few women – in camouflage, brandishing “Do not tread on me” flags or homemade signs, wearing American flags around their shoulders, or, like a few younger men who had shown up in NRA or MAGA hats, shouting at the rallygoers through a megaphone) was asked to leave by their police escort.

I personally spent the majority of the rally mostly disengaged from the rest of the crowd, which was in itself impressive – men and women and children of all ages, with witty or heartbreaking signs, all cheering or dancing or holding moments of silence. Most of us were already in 90% agreement with what needed to be done and how to do it, so I instead lingered around the perimeter of the self-proclaimed 2nd-amendment-protectors. A lot of them paced their enclosure with righteous anger, shouting insults at Antifa members or “statistics” or what-aboutisms, but I eventually surmised that, smirking NRA-supporting college kids notwithstanding, the position held by the opposition group was that of protecting citizens from the government, when it eventually and inevitably turns on them. They cited “well-regulated militias” as the Constitutional precedent for this. The younger members were more prone to contending, to poking and prodding through their megaphones, not actually interested in listening to the other side. A man in a ski mask, however, actually left the circle to have a conversation with an older man supporting gun control; their earnest and respectful dialogue went on for quite some time, and, although neither party walked away with changed positions, I felt as if something important had transpired.

What surprised me the most, however, was how members of “my side” reacted. The same conversation was picked up later, except some radical members of Antifa were standing nearby, and started screaming, “STOP MANSPLAINING” or “SHUT UP” in their faces. When I confronted them (because interrupting is rude no matter who you are), they aggressively countered with “I don’t care. I don’t care.” I was taken aback by the absolute refusal of these adults to engage with anyone with differing opinions; as I overheard from another attendee, everyone here has a slightly different view, and we should make an effort to understand it.

A man reeking of cigarettes pulled me away and told me that we can’t reason with “these people” (meaning the opposition group). They’re spewing propaganda, and we can’t let ourselves listen to them.

“But if we leave them and their dangerous views to fester, won’t we just get what we got in 2016?”

None of these people, supposedly on my side, had any answers for me. Later, I spotted the same Antifa members throwing tampons, flipping off cameras, and screaming accusations of fascism at the opposition.

Once the small group was escorted off of the Common, I left with a lot of questions – at what point do we no longer gain anything by engaging in debate with the other side, and should just ignore them and not give their opinions an audience? Doesn’t this isolation just create a vacuum for their anger and frustration to grow? When confronted with facts and questions, how can I respond with emotional or anecdotal arguments without being dismissed as irrational? I know we use objective standards as goal points for a negotiation or argument, but what do we do when the other side buries us in endless & unrelated “facts” and what-aboutisms?

Near the end of the official rally (there were speakers on stage, but it was hard to hear what they were saying from my distance), I found myself on the outskirts of the crowd, and ran into another public spectacle: a young woman with a sign and a cigarette shadowing a man talking about the word of God into a megaphone attached to his hip. She kept holding her sign over his speaker and blowing smoke into his face, which he tried to shield with his pocket bible. I usually laugh along with those who mock the public preachers, but this felt wrong. I approached the woman and another man with a gay pride flag who were invading the preacher’s personal space, but I couldn’t quite think of how to articulate what I wanted to say. First, I had to identify myself as “one of us”: “I don’t believe in anything he’s saying, and it’s a little obnoxious that he’s doing it here during the rally.” But then I asked: “You don’t have to do this, though. He’s not hurting anyone. Don’t be a dick, you know?” The preacher was young as well, and seemed to be genuinely passionate about his God’s love. “This kind of feels like bullying.”

I walked away without having convinced the woman to leave the preacher alone (I do think she ended up getting out of his immediate space, but her excuse for the harassment was that he shouldn’t be doing his preaching here, in our space), and the sound of his scripture faded away as I dove back into the crowd.

I found myself frustrated by the behavior and moral arrogance of the younger adults at the rally -- no doubt emboldened by the thousands on our side, and those on both wearing masks. I can't speak as if I know the depth of each rallygoer's pain, but what I saw at the rally felt counterproductive. Like many liberal spaces I've been a part of (and contributed to), it shut out the opportunity for dialogue as soon as another's opinion deviated from a socially established norm. How are we supposed to engage with people on “our own side” and convince them to treat our adversaries with the same respect we expect to receive in return?