Your meat and dairy loving friends will be happy you brought these meals to the next potluck. 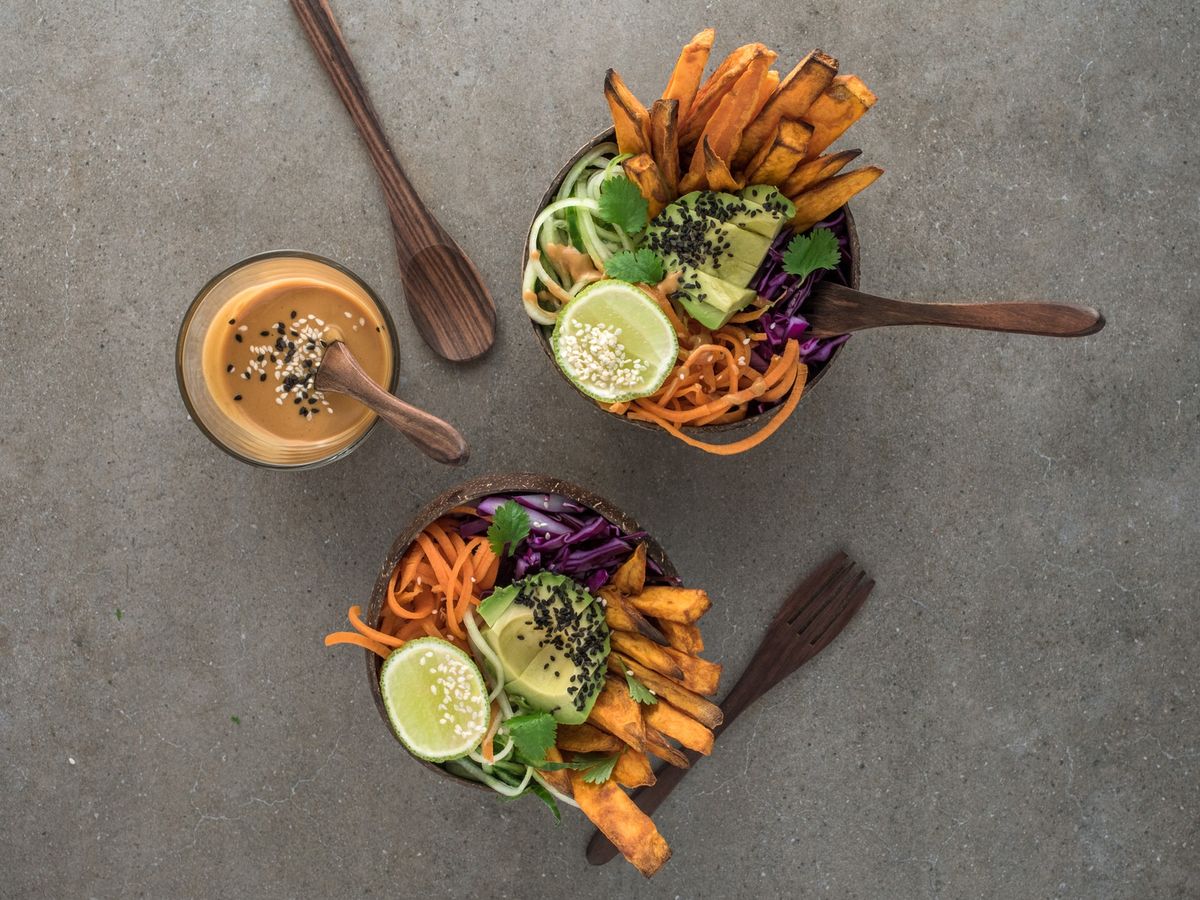 My boyfriend, a Michigan native, has always been a die-hard meat lover. When we were in the "going out" phase, he would always order the meatiest meal on the menu whenever we dined out and often something that was smothered in cheese or covered in a creamy dressing.

To give you a better idea of his eating habits, his favorite meal as a kid was steak, and his second favorite was a tie between mac and cheese and buffalo wings. When I first explained veganism to him, he gawked in genuine confusion as to how I lived off of what he thought of as rabbit food, a-la Ron Swanson.


So naturally, if someone would have told me that he would eventually end up eating (and asking for second helpings of) my vegan cooking, I would have laughed in his or her face.


But you can toss out all of your preconceived notions that vegan meals consist of only lettuce, carrots and a few almonds. It turns out there are plenty of recipes that will satisfy those true meat and dairy lovers.

These meal ideas prove that vegan food can be hearty, filling and comforting.

Despite being a vegetable and not fried chicken, this tastes like the real deal. Breaded and fried cauliflower is already super satisfying, but when you cover it in buffalo sauce, you're taking it to the next level. I love pairing this with vegan ranch such as the JUST or Follow Your Heart brands, which are just as creamy and delicious as their dairy counterparts.

It might sound like an oxymoron, but meatless chili is actually a thing. Instead of using chicken broth and ground beef, the vegan version opts for vegetable stock, soy protein crumbles and a lot of veggies and beans for that hearty consistency. My personal favorite meatless beef crumbles are from Trader Joe's, and they're super cheap!

This is by far my favorite meal to make for omnivores, especially for all the cheese-lovers in my life. I'm telling you, you would not believe how much this tastes like the mac and cheese your mom has made your whole life.

It's creamy, it tastes cheesy and it's the perfect comfort food. And if you don't want to go through the trouble of making the cashew cheese sauce (or if you're just worried it sounds too healthy to taste good), you can always opt for the classic Daiya cheese shreds and make the sauce with that instead!

Seitan is the most underrated meat substitute out there. Not only does it have the closest resemblance to a "meaty" texture, but it is so versatile. You can basically mold seitan into whatever your meat-loving heart desires, but for the sake of this list, I will choose to elaborate on many meat-eaters' favorite dish: steak and mashed potatoes.

While it's super easy to make vegan mashed potatoes (vegan butter, nut milk, salt, black pepper, potatoes — duh), not many people would think of making a steak out of wheat gluten. But this recipe is sure to satisfy anyone's steak craving and keep some cows alive in the process!

This traditional creamy pasta dish is known for being hearty and filling — and also typically full of beef. However, the vegan version is all of these things and more because it's packed with added nutrients. Mushrooms are packed with essential vitamins and minerals and are a great substitute for beef. They also add a lot more flavor, which is something many meat and dairy lovers insist is lacking in vegan recipes.

This old favorite had to be on my list. Sloppy Joes are definitely not nice to look at, and even when I ate meat I questioned what exactly was in them. But their vegan counterparts are definitely not as scary and can be somewhat healthy! You can opt for the plant protein-packed lentil version or take the soy protein crumble route. Either way, they're delicious.

Dairy lovers love their lasagna, but so do vegans. And believe me, cashew ricotta is so similar to the real thing that you could definitely trick any unsuspecting omnivore into eating (and loving) it.This recipe for veggie lasagna is without a doubt my favorite and full of hearty, nutritious ingredients such as zucchini and eggplant. You definitely won't miss the meat or the dairy.

I had to throw a breakfast idea in here since breakfast is the most important (and maybe most delicious) part of the day, but I might be getting some worried glances. Repeat after me: tofu is not scary. It can actually be super tasty and flavorful when it's prepared correctly. If you bring these tofu scramble burritos with beans, avocado and even vegan sausage to your next Sunday brunch, your meathead friends will never want to eat another freezer-burned Jimmie Dean breakfast sandwich.

Alright, you probably think I'm yanking your chain with this one, but hear me out. This "chicken" is actually made with chickpeas, and it's super innovative, tastes surprisingly like battered chicken and is full of fiber and protein. This is also a great option for those with a gluten or soy allergy or sensitivity since no tofu or wheat flour is involved. As an Italian vegan, I was hesitant about trying this at first since I thought nothing could come close to the real thing. But I was pleasantly shocked, and I'm sure your Italian food-loving friends will be too.
Report this Content
This article has not been reviewed by Odyssey HQ and solely reflects the ideas and opinions of the creator.

Glorie Martinez
3212
Why I Write On Odyssey