Understanding All The Letters In The LGBTQIA+ Acronym
Odyssey

Understanding All The Letters In The LGBTQIA+ Acronym

You've heard about Laverne Cox and Caitlyn Jenner, and the SCOTUS decision just made all marriages equal. It's time to learn more about the OTHER groups that make up the queer community. 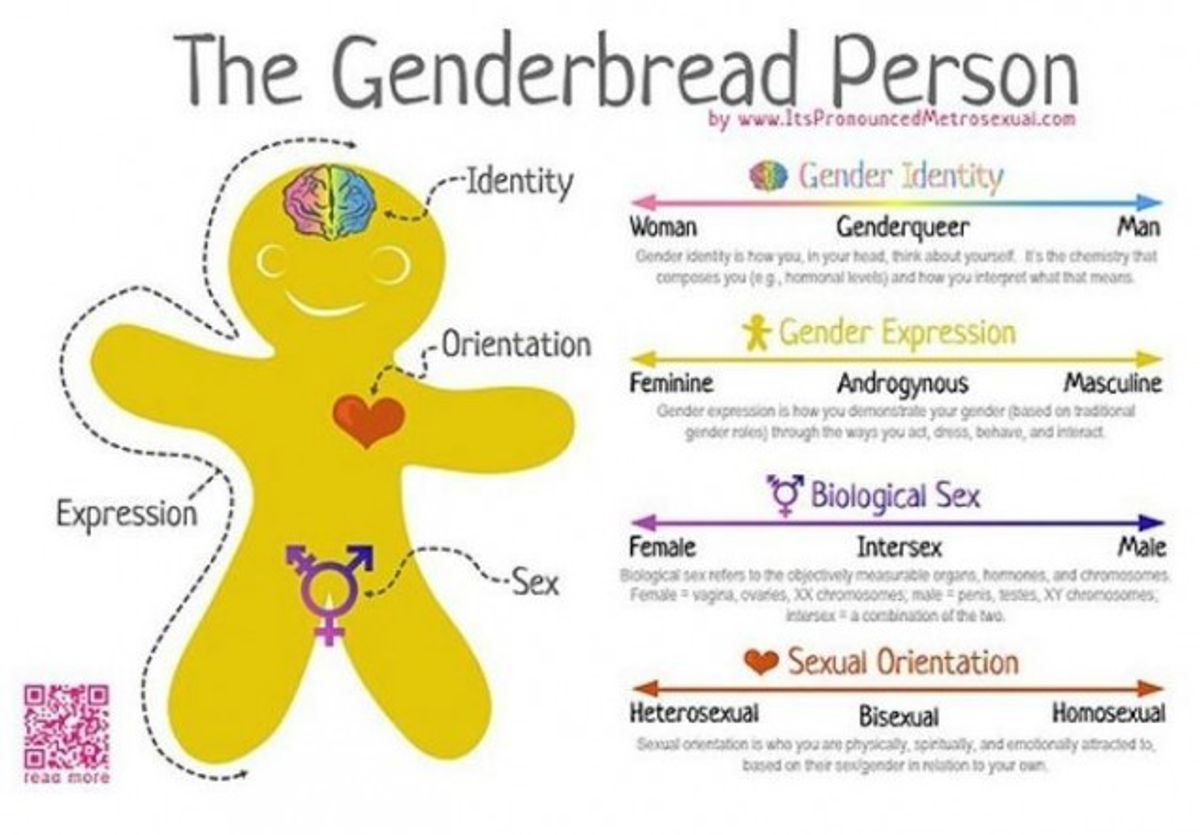 You've seen the news (or at the very least, your very rainbow-colored Facebook feed), but are a little embarrassed to admit that while you support the LGBTQIA+ community, you don't know what all the letters stand for. Have no fear! This helpful guide will give you the (very very) basics of different identities and what they mean.

Let's start with the two fundamental building blocks. In order to understand different types of sexualities and some of the major groups on the gender spectrum, you need to know what gender and sexuality are.

It's important to note that while gender and sexuality are often discussed in similar conversations, they are different things. Identifying as one gender does not say anything about sexual preference. The best way I've ever heard it described is like mismatching socks - putting one sock on one foot does not automatically mean you have to put the same one on your other foot.

Bisexual: An individual who is attracted to both male-identifying and female-identifying individuals, traditionally cis-gender ones. They do not have to be equally attracted to both genders, this doesn't mean that they're more sexually active than others, and it doesn't mean they're secretly either gay or straight. It simply means that there is a dual attraction. "Bisexual" is commonly confused with....

Pansexual: Attraction to any gender. As one of my friends put it, "I am attracted to people, not their presentation." This is different than bisexual because they are attracted to individuals from anywhere on the gender spectrum, including all the identities described below and many more.

Polysexual/Polyamorous: Attraction to multiple partners simultaneously. Poly people can also be bi, straight, gay, pan, or other type of orientation. They have two or more partners at the same time; these relationships can be very healthy and happy, so remember that even if a certain type of relationship doesn't work for you, doesn't mean you get to say what does and doesn't work for other people.

Asexual: Apathetic or disinterested in sexual relationships. Asexual people could still be very interested in romantic gestures like cuddling or hand-holding, and may even choose to engage in sexual activity if their partner is not asexual.

Skoliosexual: Someone who is attracted to non-cisgender people. This includes trans, gender fluid, androgynous, and other gender-queer people.

Cisgender: Someone who identifies with the gender they were assigned at birth.

Transsexual: Someone who is transgender and is undergoing some type of physical change to another sex (hormones, surgeries, etc).

Intersex: Someone who identifies as both male and female. Other identity names for this you may hear include androgynous or two-spirit. Androgyny can also be associated with being agender.

Gender Fluid: When someone identifies as different genders, or no gender, or many genders, at different times.

*Remember that you can ask someone which pronouns they prefer, and you should respect them by using those pronouns.*

Queer: A term that encompasses individuals of varying gender and sexual identities. It is used in a positive manner in the LGBTQIA+ community since, as you can tell from this article, the acronym is long and complex. Referring to it as the "queer community" abbreviates that, but queer is also a reclaimed word. Using it in a positive manner? Typically acceptable. Using it in a derogatory and derisive manner and trying to defend using it that way by saying that the community does? Never okay.

Questioning: Still figuring out an identity and understanding where they fit on the gender spectrum or with their sexual preferences.

This list is by no means exhaustive, and there are tons of awesome resources that have more information like this list of gender and sexuality terms defined, or this site dedicated to education on queer issues. Even if you identify and straight and cisgender, educating yourself and knowing about issues that affect the queer community make you a better ally and friend!