Miss USA Feud on The Bachelor

There May Be Two Pageant Girls On 'The Bachelor,' But There Is Only One Queen

Who will win Colton's heart on The Bachelor? Will it be Caelynn or Hannah B? 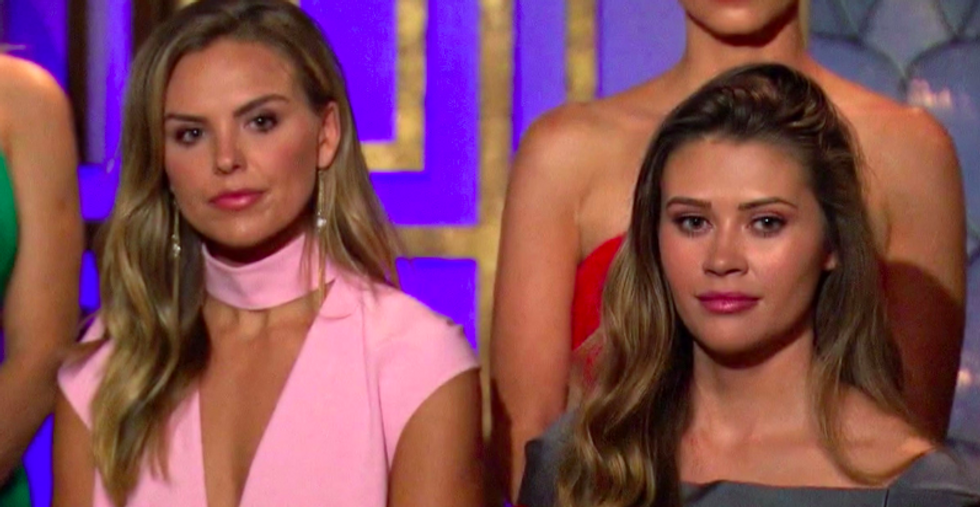 So, if you have been secluding yourself every Monday night to watch the Bachelor in bed with a bottle of wine, you are probably well aware of the drama that is happening between both the girls who have crowns *dun dun*. As a former Miss America Title holder myself, it is saddening to see the former Miss USA sisters go at it during this season. It does not give the best representation of what pageantry sisterhood is all about. I know we all have our catfights with friends and that The Bachelor does a really good job in creating drama, but I am here to say, THAT AIN'T ALWAYS THE CASE LADIES.

I am going to back it up and break it down for all the people who are like…. "What's a Miss USA?" Caelynn Miller Keyes won over hearts as she was crowned the first runner up to her best friend, Sarah Rose Summers (Miss Nebraska). She was Miss North Carolina and she looked STUNNING in her tangerine/orange evening gown (the same gown she wore when she stepped out of the limo). Can you tell whose side I am on? I remember watching her compete and going, "we have a winner" then dropping my jaw when she did not take home the crown. Hannah Brown was Miss Alabama who did not secure a spot in the top after competing in preliminaries. I was shocked because I had her in my top picks, maybe the judges could tell she could bring on the drama and boy, were they right.

I may have slight favoritism towards Caelynn because when my friend ran into her at an event/conference in LA, she called me and wished me a Happy 21st and all I could say was "OMG wow I just love you"…. I don't do well around people whom I consider "celebrities." She and my friend actually became super close, so I also was caught up on the drama of everything which was fun. I knew Caelynn was going on the Bachelor and I knew there was going to be drama between her and Hannah B after being butthurt about Miss USA, but I was not expecting this! I was shocked about what was said so soon on the season about Caelynn and honestly, I felt like Caelynn has handled everything like the boss she is from the beginning. I appreciate her trying to mend things with Hannah B. and talking about how hard it is for women already so why make it harder? I also love that she's not fake towards Hannah B. and pretending to be BFF's, but she's just a kind and genuine person. So far, she's my mom's favorite and that's a huge honor.

Caelynn also digs into her past regarding sexual assault and I really appreciate her using her story as a way to advocate for others. That is something so difficult to discuss and even harder on national television! She is an incredible advocate and a 10/10 person. This article is based on two pageant girls, but how only one is a queen and I hope I don't need to spell it out for you who is being more of a queen on this season. So, what can you learn from this?

First, be the bigger person. Second, love your "enemies" or "competitors" because if you don't win, you end up with nothing. And third, if you ever go on The Bachelor, do not strive to be the bad guy/girl of the season because it is not cute.

I am excited to see what else unravels this season, even though I know the end results thanks to @bachelornationspoilers on Instagram. Your girl is too nosy and impatient to not know. I hope you continue to spend your Monday nights in Colton land because all I can say is, it is about to get real interesting.