While America Is Preoccupied With Iran, The Real Threat Resides In The White House

While America Is Preoccupied With Iran, The Real Threat Resides In The White House

He wants to start a war to distract America from his impeachment. 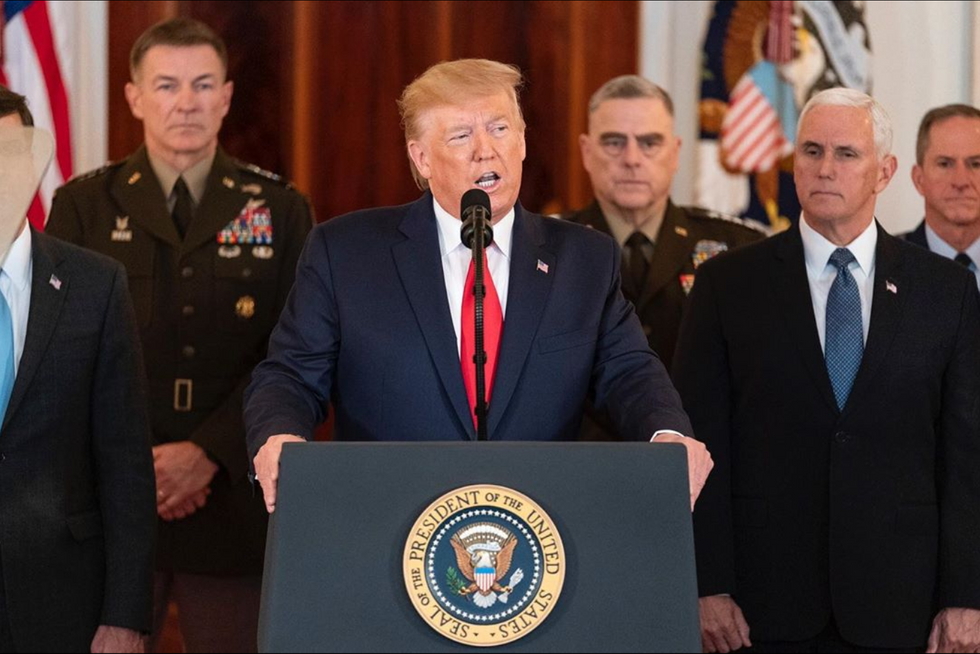 For way too long, America has been tolerating the rants, tweets, insults, and disastrous agenda of the corrupt, incompetent criminal that occupies the Oval Office. The hate and fear-mongering started on day one and still continues today.

Trump, the draft-dodging Commander-in-Chief who never read about wars or had any military experience, is now putting the lives of young American men and women at risk to keep from being charged for his criminal actions and put in jail. Instead of spending the money on things like helping the homeless, schools, and retired veterans, Trump wants to waste it on a war with Iran, which started after Trump ordered an airstrike that killed top Iranian Major General Qassem Soleimani.

According to CNN, the death of Soleimani was made in order to prevent a terror threat, but Trump's choice to kill one terrorist (who was not just a General, but a member of the Iranian Government Administration), was seen as a declaration of war. Risking thousands of lives just to remove one terrorist is another reason why Trump is not qualified to be President. While Trump continues to make important decisions on foreign policy, nobody will be safe.

Trump announced he would create new sanctions, and fortunately, no causalities occurred after Iran launched a missile assault in retaliation against U.S forces located on two Iraqi bases. Since America was aware of the attack in advance, U.S troops and other recruits had the opportunity to find shelter in bunkers.

During his address to the nation, Trump discussed the attacks and the increasing conflict between the U.S and Iran. Tensions with Iran happened when he decided to withdraw the United States from the Iran Nuclear Peace Agreement, which was part of his sick agenda to repeal everything Obama did. Before the missile strike, Trump made threats to bomb 52 Iranian cultural sites, further proving that his irresponsibility and lack of self-control makes him a greater threat to our nation.

Hours later, he managed to avoid escalating the tensions between the two countries further, but the conflict is not over yet. We cannot allow Trump to keep provoking foreign countries and continue to put America in danger.

There was a report that explained how Trump wants to start a war Iran as a distraction from his impeachment and failing administration. Former presidents Ronald Reagan, George H.W Bush, and George W. Bush started a war during re-election years, and it seems that Trump is following the same tactic. Americans should be worried about what the President is doing, and needs to remove him from office to protect themselves from his malevolent intentions.

Wars should not be declared just because Trump wants to avoid prison time. Americans have to stand up against a President that abuses his power and is willing to threaten the safety of the nation for his own personal gain. Trump wants everything to go his way and he does not care who gets hurt. By working hard, remaining positive, keeping updated with current events, and supporting each other however we can, we can finally put a stop to the threat preventing harmony in the world, and democracy in America.