To Be "Queer": A Brief Linguistic History
Odyssey

To Be "Queer": A Brief Linguistic History

What does it mean to reclaim a word? 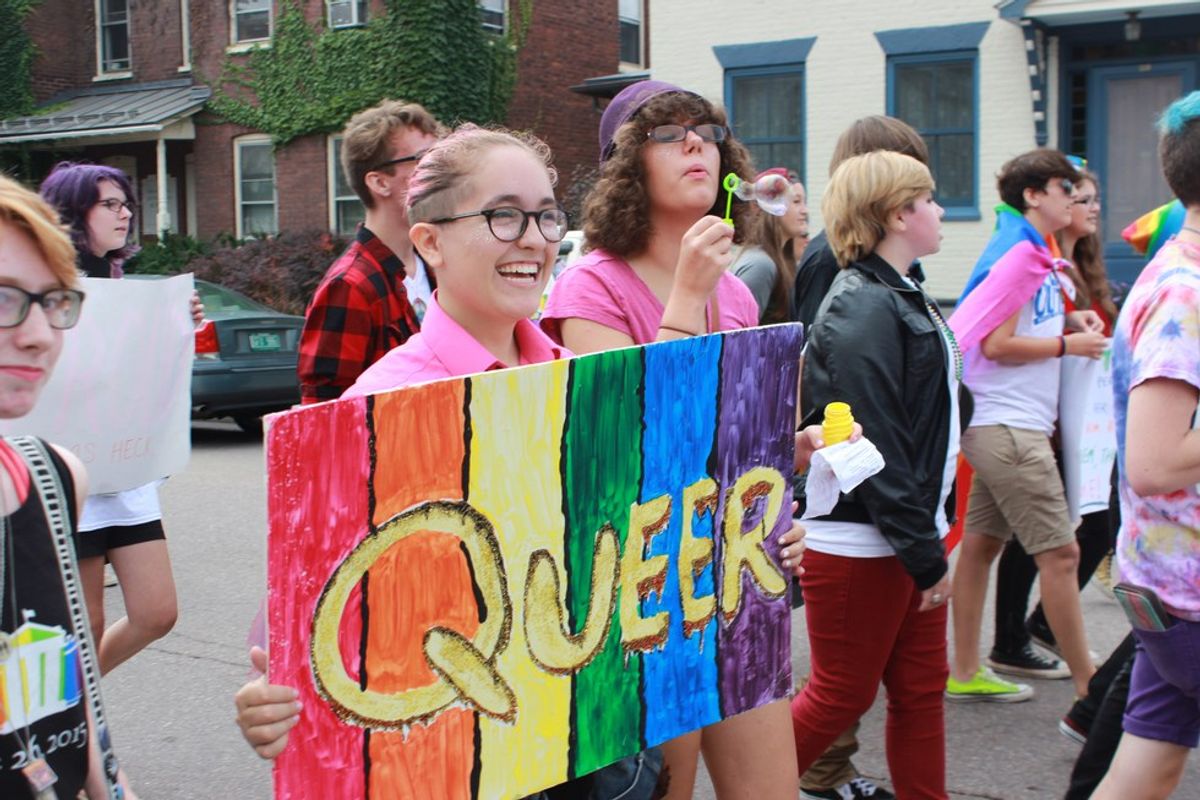 Merriam Webster defines the word "queer" as “worthless, counterfeit," "questionable, suspicious," differing in some odd way from what is usual or normal," or "often disparaging: homosexual, sometimes offensive.”

Is the word “queer” a slur then? If so, why does Western Washington University, and so many other schools, have queer resource centers? Why do so many people, myself included, use “queer” as part of their identity?

Like with so many other things, let's consider the history.

In the early 16th century came the first recorded usage of "queer" in English, which originated from the German “quer,” meaning oblique, perverse. The usage was primarily the same until the turn of the 19th century, the word meaning “odd,” “perverse,” and “outside the norm.” But even before "queer" meant “not straight,” it gained secondary definitions. In the 17th century, "queer" had the secondary meaning of “giddy or drunk.” The first time "queer" was used to refer to a gay person was in the 1840s, that we have record of. John Sholto Douglas, 9th Marquess of Queensberry, Scotland, wrote a letter to his son, Lord Alfred Douglas, blaming Archibald Primrose, “snob queers like Roseberry,” for his other son Francis’s death.

In the 1980s, during the AIDS crisis and epidemic, one group of militant gay people responded with the creation of a group called Queer Nation. They handed out leaflets called “Queers Read This” during a pride march in New York in 1990. They wrote:

“Ah, do we really have to use that word?...Every gay person has his or her own take on it. For some it means strange and eccentric and kind of mysterious. That's okay, we like that. But some gay girls and boys don't. They think they're more normal than strange. And for others ‘queer’ conjures up those awful memories of adolescent suffering. Queer. It's forcibly bittersweet and quaint at best --- weakening and painful at worst. Couldn't we just use ‘gay’ instead. Well, yes, ‘gay’ is great. It has its place. But when a lot of lesbians and gay men wake up in the morning we feel angry and disgusted, not gay. So we've chosen to call ourselves queer. Using ‘queer’ is a way of reminding us how we are perceived by the rest of the world.”

During the 1990s, in part because of the success of Queer Nation, “queer” started appearing in academia -- “New Queer Cinema” and “Queer Theory” are two examples. By the 2000s, pop-culture took note with “Queer as Folk” and “Queer Eye for the Straight Guy.”

Now, “queer” has, for some, become an umbrella term, not just uniting gay men and lesbians, but people across the sexuality and gender spectrums. Why do some words get reclaimed and not others? I don’t know the answer, and there are plenty of people who have devoted a lot more time than I have who don’t know either.

My theory about why "queer" was reclaimed successfully? There were plenty of gay slurs that could have been reclaimed. It was because there was a need for it. LGBT is not fully indicative of the diverse and wonderful community that so many people, myself included, belong to. LGBTQIA is better, but some people are still left out, and it alienates community and non-community members; alphabet soup is not a great rallying cry. Queer, though? It's short, sweet, and inclusive: Exactly the kind of word that the community needed in the past, and definitely needs now.

My favorite thing about “queer” is the irony; it's a word that is supposed to mean "strange," but now, it can give people a common ground, a community, and an identity that unites people rather than divide them.
Report this Content
This article has not been reviewed by Odyssey HQ and solely reflects the ideas and opinions of the creator.