I Shoot Guns Recreationally, But Don't Blame My Family For Gun Abuse
Odyssey

I Shoot Guns Recreationally, But Don't Blame My Family For Gun Abuse

I've been raised up to stand my ground. 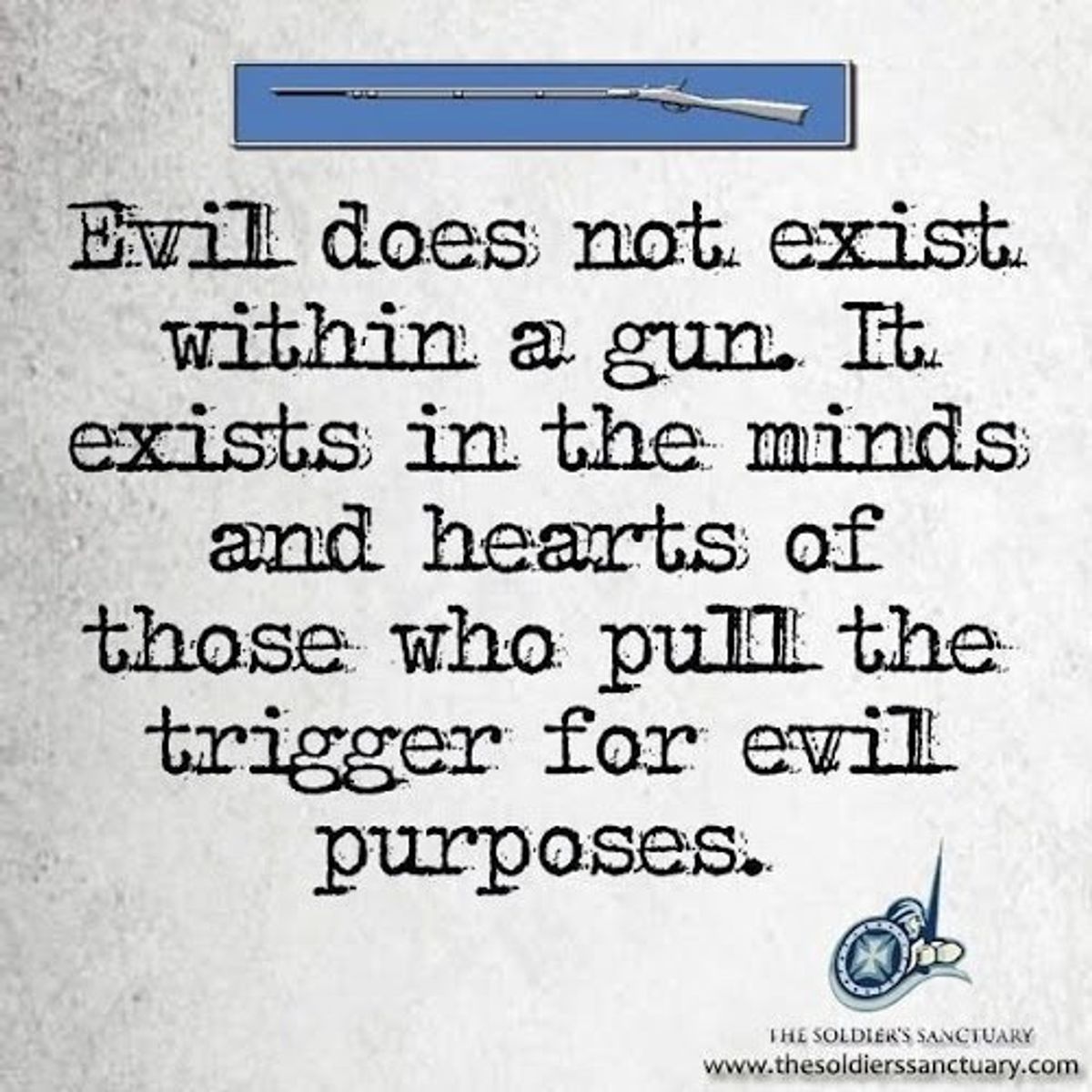 Recently I found myself sitting in my Sociology classes talking about the tragic realities we are facing in the world. We were talking about violence, mass shootings, and just why this stuff is happening. Of course, gun control came up. I am 375% against anti-gun laws, but before you start yelling let me explain why.

First, let me tell you my background. I was raised in a Republican household, with a dad who served in the military, a grandpa who owns his own gun shop, and that hunting is the way to obtain food. I am from an extremely small town, with no stoplights. When I say small I mean tiny, in 2013 our population was only 341. I live past the "End of State Maintenance" sign on my road, and if it snows good luck getting up our driveway in your car until Spring. I received my first gun at nine years old, and believe me it would have been sooner if my mom would have let me. I also hunt. Yes, I know so shocking.

I know I am a 5'2 blonde, pretty, preppy girl, but that does not mean I can't out-shoot the boys (because I do!). I got my first deer at 10 years old, and I have gotten one every year since. My little brother is six, and got his first deer this year. Yes, we shoot guns for recreation, and yes we enjoy it. No, that does not make us crazy. My mom does not have to purchase meat all year for our family, which saves a ton. Also, my dad processes our deer as well, so for all of you organic lovers I think that is as organic as you can get. I know where my food comes from, and everything that is in it. I don't care if you are democrat, republican, white, or even purple you have no right to use these killings as the reason to vote against guns.

"Murdering innocent people to prove a political point of view has been, and always will be evil." -George Bush

This does not mean that I do not sympathize with the victims of the shootings, or that I agree with what is happening. I am just saying that I also do not agree with punishing innocent people (like my family) for what a cold-hearted person did. I do agree with making guns harder to obtain, but making them illegal is idiotic in my opinion. Most of the people that commit these killings are doing so with guns they obtained illegally. So making them illegal, wouldn't change anything.

The only thing it would change is that when someone who obtained a gun illegally comes to attack me, I can't defend myself because I am following the laws. Lets look at other things that are illegal like, meth, alcohol before age 21, and weed (in some states). We still see it being used, and obtained daily. Remember when your mom told you not to hang out with a certain friend, or your dad did not approve of your new boyfriend? It just made you want to do it more.

Laws do not change anything! they just create another reason for deviant behavior. I do agree with making them harder to obtain, but I think we should do the same for violent video games if we do it with guns. You want a psychological evaluation to have a gun? Use the same test if you want to purchase violent video games. You want more intense background checks? Do the same check on the 17 year old trying to buy Call Of Duty. That person being bullied, with a sketchy background and an undiagnosed mental illness and violent tendencies is sitting in his room 8 hours a day playing a video game all about killing. If you are saying guns pull the trigger, than video games light the fire. In my Criminology class last week we watched a film on why these violent acts are occurring. One of the examples was about a video game called "Bum Fights." In this game you sneak up on innocent homeless people, and beat them. Some of these beatings even result in death.

The result of this game led to many YouTube videos of teenagers doing the same thing, but in real life. Many videos show violent beatings, blunt head trauma, and death. If this isn't the most realistic example you will believe, I don't know what is. It's sad, but it is what our world is coming to. People can't see the differences between reality and pretend anymore. Do not take my guns away, especially if you are going to allow violent video games. If you think my video games theory is dumb, that's how I feel about anti-gun laws. Think of something you love to do, like me I love shopping. Then think of the government taking that thing away because of a few bad people, like if they said no one could shop in stores anymore because of shoplifting. IT IS ABSURD. Don't let one bad apple ruin the whole tree.

Emmaline B
The Narrative
83673
https://unsplash.com/photos/O0T1SIgHAfM