What is "The Morning Toast?"

'The Morning Toast' Has Changed My Life, And I'm Here For It

Hi, my name is Lauryn Smith and I'm a Toaster. 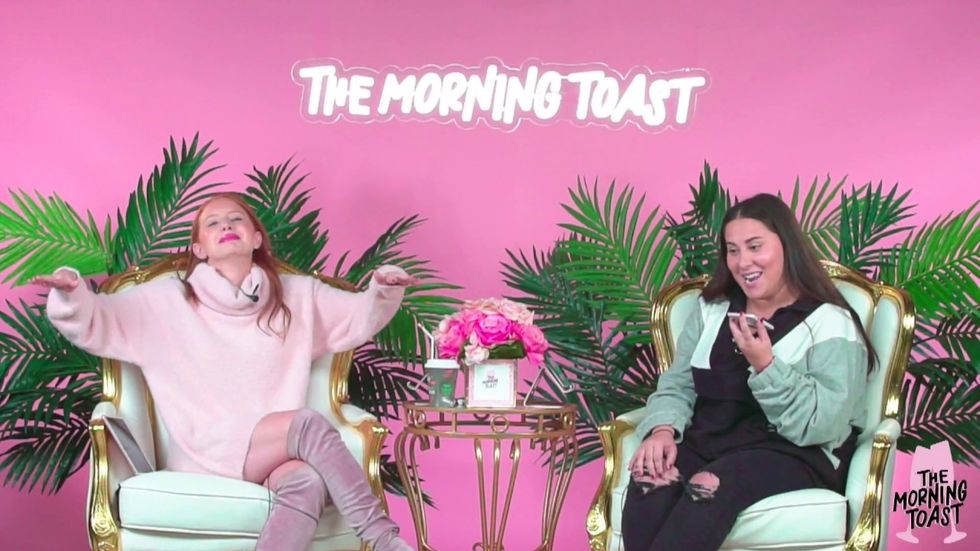 "Good morning millennials!" A little over a month ago, my world was turned upside down. With the help of my trendy mom and my good friend Mia, I was introduced to a show/podcast/live stream/cult entitled "The Morning Toast." Two sisters, Claudia Oshry (more commonly known as the famous memestagrammer @girlwithnojob) and Jackie Oshry (@jackieoproblems), host a daily morning streamable live show where they cover every topic under the sun. From pop culture to television recaps to current events to politics, these girls fill in their viewers with the "fast five stories that you need to know before you wake up and take a bite out of your morning toast"...*chomp.*

Soon after, I became hooked to these two girls and their remarkably close relationship (and have quickly picked up on all of their unique lingo). The Oshrys also have two other sisters, recent college graduate Margo (better known as counselor snitch) and successful marketing businesswoman Olivia. Together, these four girls are a powerhouse of sisterhood, and I would be lying if I didn't say that I didn't want to insert myself into their family as the fifth sister.

But it's not just their family itself that I am fascinated by.

Foremost, I am completely just jealous of their lives. They literally get paid to sit and talk about celebrities and T.V. shows and post on social media...talk about the best job ever! Claudia and Jackie's daily banter on anything and everything makes for the most "premium content." They have such strong opinions on a variety of topics and their perspectives are always so relatable to people, no matter what they're talking about. For example, they would do a recap of "Game of Thrones," which I don't watch but nonetheless, I still found what they have to say interesting. They could be talking about a blank wall and I would probably find it entertaining!

What I think I love most about them, however, is how real they are. The Oshrys don't hesitate to share the good, the bad, and the ugly parts about their lives. They talk about their insecurities, aren't afraid to show up to work with no makeup, and open up often about their biggest challenges in the community, one being when the world discovered who their mom is (a controversial activist), sending them into what they like to call "canceled culture" for a pretty long time. No matter how many nice things they own, how many celebrities they get to meet, and how dang cool of lives they actually have, they always make a conscious effort to remind their followers that they are just people.

I've developed such an endless connection and love for these girls in such a short amount of time it's insane, and it's not just because they're fellow ~members of the tribe.~ First of all, they love country music, reality T.V., and camp...like if that ain't me. But even more so their relationship and energy on camera are truly infectious, it's not just me who is a ride or die "stan" of them. As soon as I began following the toast, I joined the exclusive "Morning Toasters" Facebook group that has almost 40,000 members! The Toasters group is the one place I can get the first inside scoop on everything pop culture, ask for recommendations on products, and I can even connect with people about things like job opportunities. There are even a bunch of Toaster subgroups I'm in that you can find for just about anything. I'm in a subgroup for YouTube fans, country music lovers, Chicago Toasters and even people who watch "Friends"...imagine that!

This past weekend, Claudia and Jackie hosted #CampToast, a fun-filled weekend located in Poconos, Pennsylvania (where they once went to camp their themselves) that is literally a weekend of overnight camp for toasters! The #campers got to share in a true overnight camp experience that included a high ropes course, tubing, a talent show, a campfire, and living in a cabin but with a ~twist.~ And by a twist, I mean an open bar from noon to midnight for three days straight...and let me tell ya it appears like these toasters know how to party! As a true camper at heart, this weekend was right up my alley and I was living vicariously through all the Instagram stories and their podcast recap. Screw Vegas, I am going to Camp Toast when I turn 21!

Surprisingly enough, I gained an even greater value from the toast that I wouldn't have expected. Throughout most of my life, I occasionally glanced at the T.V. screen to get updates on everything politics and news when my mom would watch the "Today Show" every single morning. Yet all that changed when I went to college this past year and felt completely trapped inside a bubble and feeling no connection to anything that was happening in the world. Little did I know that watching the Morning Toast would make me a lot more cultured and "in tune with what's necessary." And they are actually topics that I want to know about compared to some of the boring stuff on the news haha!

Even though it is oftentimes a big chunk of their show, they don't just talk about meaningless celebrity gossip. A lot of the time the stories they mention are relevant to just life in general. Like for example one of the stories they shared on an episode was about how Uber drivers are going on strike, and then went off on a tangent about how the company Uber has made an enormous impact on transportation when it comes to things such as drunk driving, but also its flaws when it comes to things such as its connection to sexual assault. These are conversations that the world needs to hear about, and I'm glad that the Oshry sisters are making a difference in educating the lives of everyday people without even realizing it.

I am so glad that I have transitioned to a Toaster and I "can't and shan't" stop being a "stan" anytime soon. I'm even going to see Claudia's "Dirty Jeans Tour" with my mom in October! There is just something about Claudia and Jackie's casual chitchat and energy that I simply can't get enough of. I want to become their best friends and I'm not afraid to admit it. I'm so thankful that I have found people to not only entertain me while I'm running on the treadmill, but real, relatable people that I can believe in and love wholeheartedly.

If you are interested in becoming a Toaster yourself, you can stream or listen to their shows using these links!