The Dangers of Generalizations in the Age of Conspiracy

The Dangers of Generalizations in the Age of Conspiracy

From Q-Anon to the conspiracies of Catholic immigrants plotting to take over America- the internet is giving a rise to dangerous false ideas about others. 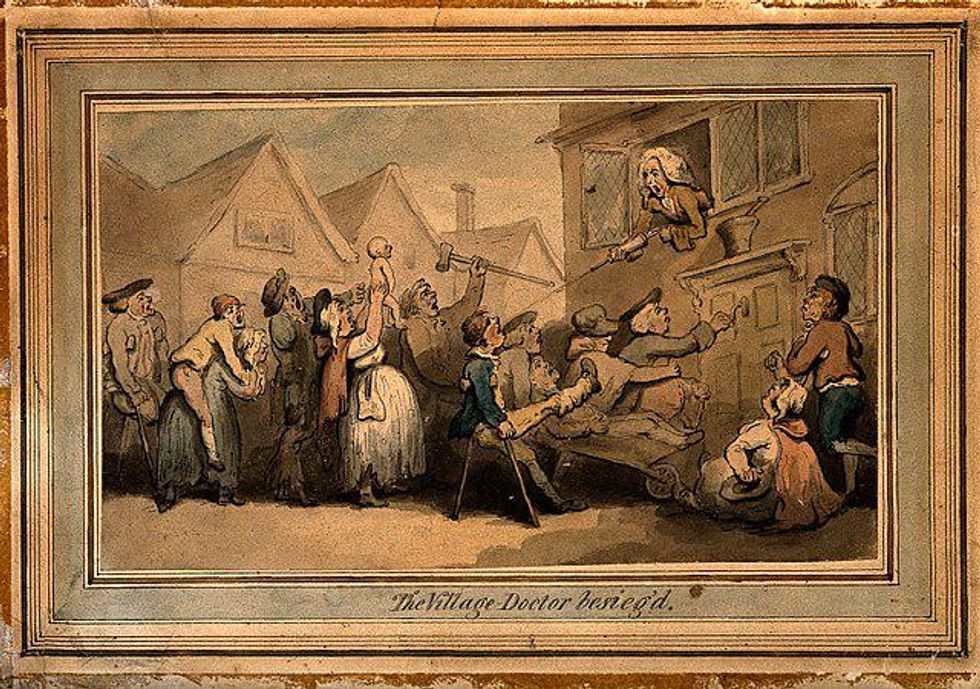 The first example I shall use is one that I recently saw on twitter that is a revival of an 1820s xenophobic conspiracy targeting the Irish.

Below is the latest disgusting rumor I saw on twitter targeting a marginalized religious group in the US.

"They are coming in hoards, the Catholics. Their church services involve mysterious rituals and both Amy Comey Barrett and Alexandria Ocasio-Cortez belong to it, they are in league with the pope" Ahh! I must stop the rumor right here. First of all let's dissect this conspiracy to the core;

1) They are generalizing an entire religious group that is foreign to many Americans. This argument is frequently seen against Jewish people, Muslims and Catholics. These three groups have sadly been marginalized throughout history, and in the cases of Catholics and Muslims the small segment of fanatics committing terrorism in the name of religion have given the millions of innocent practitioners a bad name.

2) "mysterious rituals" any religion that we are not familiar with may seem mysterious, this is why it is increasingly important to speak to those of different faiths to understand what they believe.

3) "Amy Comey Barrett and Alexandria Ocasio-Cortez" Alas! These two women both are passionate about many issues but do not agree on much. Without getting into my own personal agreements or disagreements about Judicial nominations or policy viewpoints- let's keep this neutral- clearly this is a scare tactic. They are again playing into fears by using big names of prominent people. Also, just because they may have studied some integralist or other ideologies, does not mean they agree with them. I'm pretty sure most of my readers have had a Marxist professor at one point but that does not make you a Marxist!

4) "in league with the pope" The pope is a ruler of the tinest country on earth- Vatican City. Catholics look to him as a leader. However this is again feeding on fear of them all taking word and advice from a foreign power.

Now more people realize this is just a ridiculous conspiracy- there is plenty to disagree with Justice Barrett or Representative Ocasio-Cortez on in a regular civilized debate without bringing in their religion. What is the danger you may ask? Oh gentle reader, just as we have witnessed with anti-Semitism where crowds and hateful people attacked Jewish people out of the conspiracy theories about them owning wealth- likewise such a conspiracy would lead to violence and further bigotry.

As we all beheld in horror the tragic desecration of the sanctuary of democracy (the US Capitol) all for a conspiracy theory called Q-Anon. Several members of congress were convinced their lives were in danger because of the level of hateful rhetoric and violent threats made about politicians.

Conspiracy theories aside, every religion, nationality and college campus has tremendous diversity within it. When we deny this, we deny the humanity and individuality of others and place them in a particular box. Like when people say "all Evolutionists believe in Social Darwinism and are ok with fascism" or "all Creationists are skeptics" we ignore the fast majority of people who believe in both of these. I do not see why this debate gets people so upset, people of many different backgrounds all have different beliefs about how the world was created and technically speaking nobody can go back in time and observe it so I would put this in the history category but that's another story. Or "everybody who attended Berkley University is a liberal!" or "everybody who attended Bob Jones University is a conservative!" is equally quite as amusing. People chose universities for many reasons- scholarships, financial aid, academics or location. I attended Catholic University and am not a Catholic, I studied Aquinas under a professor who was an expert in Aquinas- does this make me a Thomist? Alas no! Likewise if a person studied at Berkley under a Marxist professor, does this make them a Marxist? Nope! And many professors enjoy it when students disagree and learn how to argue various theories. My undergrad was Liberty University and due to the international spotlight many people asked me all sorts of assumptions. We all understand stereotypes while they can be amusing can also be harmful. For example "all people born in the Americas are stupid" has had real repercussions on people throughout the continent trying to be taken seriously by their European peers. Or "all Germans are strict", "all Russians are spies" and numerous other conspiracies which if anything weaken our ability to communicate and understand others for who they are.

While the Q-Anon and the anti-Catholic conspiracy theory seem like radical extremes, sadly they are not too detached from the reality that springs from generalization. First a statement is made generalizing a group of people as a "threat." Even if this generalization has people as different as Barrett and Ocasio-Cortez, the reader is drawn in. Second, once this group is labelled as the outside the conspiracy preys on the ignorance of the audience "not many Americans understand Catholics" and it plays into their suspicion. Before the reader knows it they are trapped in the clutches of the minotaur of deception ready to devour them.