The Chicken Story: Episode One
Odyssey

The Chicken Story: Episode One

My family has chickens. Here is the first account of their livelihood. 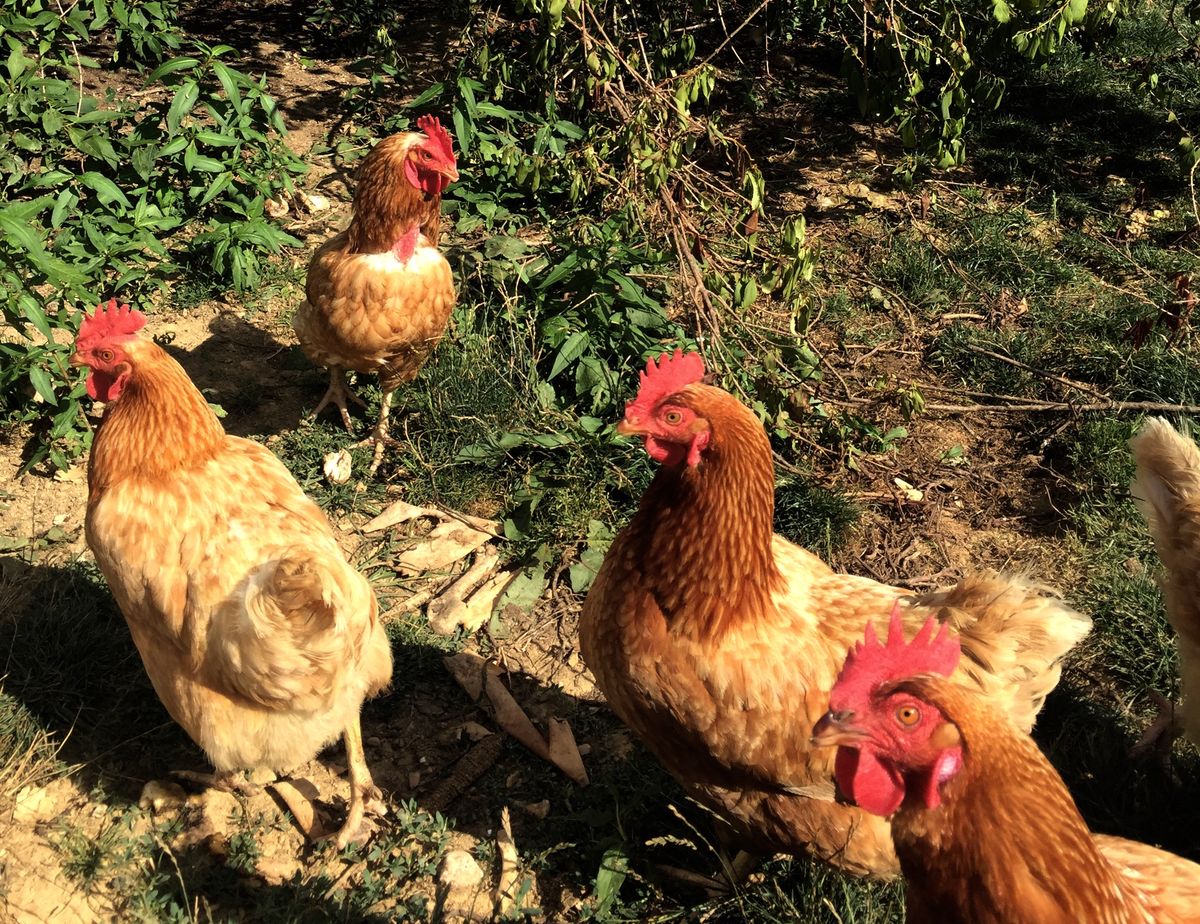 It all started when my Mennonite neighbors decided to get new chickens, and give their cast-off chickens to us. My dad set up a fenced in area and made a cute little coop, fit with prime roosting shelves, egg-laying boxes, and two convenient latch doors, one for the chickens to get in and out, and the other for the sneaky human to snatch the eggs from the unsuspecting hens. I assume the chickens are oblivious to their purposes to us, but perhaps I misjudge them. They live a pretty good life, regardless of they ever think, “hm, where did that egg I laid yesterday go? Oh well.” But hey, that’s pretty much the same attitude I have with 80% of my responsibilities. Of course, my responsibilities are not to the extreme of the disappearance of my potential offspring...

Now we got our first “batch” of Mennonite chickens a couple years ago. I believe there were ten chickens in this first group. Since then, we’ve had two or three new groups, which we purchased from the chicken catalog. You can’t mix chicken groups! That would be a mess. It would disrupt the hierarchy each group solidifies. The Mother hens would go to war, trying to overthrow the other… perhaps attempt a coop-d’etat. (hehe). Consequently, we stick to one group at a time. Our chickens bask in the glory of living, save the occasional run-in with the malicious chicken hawk, and the strange and awful situation when an egg gets stuck up in oviduct and the hen suffers from calcium deficiency until she die off or is, as my dad enjoys saying, “harvested.” In the case of chicken with a stuck egg, which is called eggbound, the chicken gets pretty sick and weak and consequently it dies or is mercy-harvested by my father. There have been eggless periods, the weeks of molting in which we actually had to BUY eggs from the grocery store. Man, store-bought eggs are really quite the rip off. An average egg from our chickens is double the size of those shelled orbs of unhappiness. They taste different too. And they are expensive! Moreover, after hopefully a month, the chickens do usually lay eggs again and our family resumes the enjoyment of fresh large brown eggs.

Chickens will eat anything, excluding raw potatoes. They love strawberries and it is hilarious to watch them slurp up spaghetti noodles. They are unapologetic cannibals. They eat chicken, pick the meat off until the bones are shining. If an egg cracks, they’ll drink that right up, they could care less about their yolk! It is completely disgusting. I must say, I admire them for their unabashed nature and their intense obsession with eating. When they hear the side door open, they book it over to you, swiftly and prepared for the blessings of food scraps.

My dog, Snickers, was at first very curious of these feathered creatures. For a couple days he was bashful, sneaking over to the coop just to look at the new tenants. Then, he jumped the fence, ripening his curiosity from the chickens to their food and particularly the product of their food obession: their excrement.

Due to his curiosity, we have to watch Snickers when he is outside. He tries to be very sneaky about venturing to the chicken’s area. He will be walking out to the backyard to his regular excrement site, then suddenly he’ll perform this sick spin move and book it to the side of the house where the chickens roam. If we don’t catch him within the next two minutes, he’s hopped the fence and covered in poop, trying to woof down day old food scraps like a madman. He is disgusting.

You may wonder what do the chickens think of this furry bandit? Usually, they could care less. At first they were afraid, but this fear was short-lived. Honestly Snickers isn’t one to strike the fear of God into anyone, not even chickens. When Snickers jumps into the pen, the chickens just let him go about his maniac dog business while they continue their daily chicken duties.

Except for one particular instance.

It was a late autumn afternoon, three or four years ago. Snickers, mischievous as ever, finds his way to the chickens. My mother was witness, as she was putting up laundry on the clothesline, which is on the side of the house with the chicken coup. On this particular of venture into chicken territory, Snickers encountered a shift in the attitude of the chickens. The former indifference of the chickens towards my fluffy dog had ceased for a moment, and thus emerged a surge of bolstering courage beginning in the depths of their feathered souls. For several minutes, Snickers had been roaming throughout their area, snarking down feces and foodstuffs, when suddenly and swiftly, one in spirit and purpose, the ladies attacked this intruder. The hens flung themselves at Snickers, terrorizing him with their peaks, opening their wingspan in a flight of rage. Thus they defended their land, and ostracized the enemy. Snickers probably peed himself. He is a very sensitive dog. I should mention that Snickers, although he loves jumping over the chickens’ fence, he has no concept of how to jump back over the fence. Consequently, at this unexpected attack of the chickens, Snickers was trapped and completely overturned to terror. It was my mom, who again, witnessed this battle, that came to Snicker’s aid and delivered Snickers out of the fury of the warrior hens.

This has been the first episode of The Chicken Story. Stay Tuned for the Next Episode: March 26, 2016: The Chicken Massacre.

Caitlin Marie Grimes
University of South Florida
11569
Beyond The States