The Chair That Gave Me Back My Life

Although the wheelchair is the international symbol of disability, this chair brought with it a redefined ability 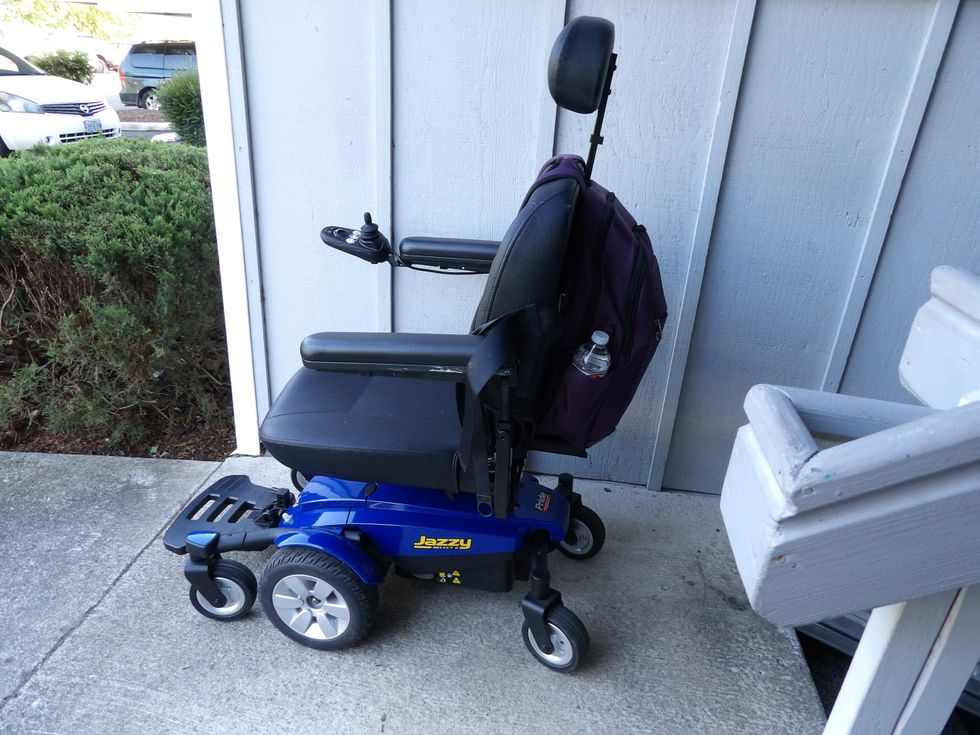 When I returned to my home state of Washington in July 2017, my broken, disabled body was less able than it had been in years. My first order of business was to make appointments with both my primary care practitioner and my pulmonologist. My asthma had been flaring, causing me to spend at least one day in an emergency room each month to seek breathing treatments.

The result of my July visits was a diagnosis of pansinusitis with a complete obfuscation of ALL of my frontal sinuses. My prescriptions for my inhalers were renewed and I received two new prescriptions, one for a steroid, prednisone, to lessen the inflammation inside my sinuses and an antibiotic, levofloxacin, (generic for Levaquin) to clear the infection.

What happened in my body after I took that medication was something unbelievable. Every single tendon in my body became inflamed. I had no idea how much our bodies are held together by tendons until mine didn't work.

Walking hurt, so I stopped walking. When it stopped hurting as much, the pain was replaced with neuropathy and when I walked, I began falling. The day before my 52nd birthday, a powerchair was prescribed. I waited with bated breath for the freedom that it offered.

I borrowed a manual wheelchair from a local medical equipment bank since my insurance was covering the powerchair, they wouldn't also pay for a loaner manual chair.

Combining the strength in my weakened feet and legs with my damaged shoulders and elbows, I could get around my apartment as long I stayed on the wooden floors.

Late in February, the phone rang. It was NuMotion. They scheduled a man named Nick to deliver my powerchair to my apartment on Thursday, March 7th at 2. I waited anxiously.

On Thursday at 2:15 when no one had shown up, I called NuMotion. They stated they had scheduled my delivery twice: Once on Thursday and once on Friday. Apparently the fact that I had been waiting for six months caused them to think one more day would be fine.

When Friday did arrive, so did Nick from NuMotion with my chair. The first thing I did was take it for a spin!

There seems to be an issue here...

Once the powerchair was in my possession, I wanted to use it. However, my use of the chair outside of my home was limited because of the fact there were six stairs leading down to my apartment. Although I had submitted a request for reasonable accommodation from my apartment complex, asking for a way to get out of my apartment, I had not heard any answer.

When Nick delivered the powerchair, I asked him if there was an equipment ramp that I could borrow for caregivers to move the chair up and down for appointments. He brought a loaner the next week.

At the top of a very steep ramp...but OUT!

The pain of getting pinched in back of the chair, between the chair and the wall while attempting to get the chair up the ramp was worth it. The ramp worked!

I was able to get out of the apartment.

The ramp folds in half so that people can get up and down the stairs, but it is still in the way

I was informed early in April that a tenant had put in notice who lived in an accessible apartment and given a possible move date of April 20th. But April 20th came and went and no one moved out of that apartment so I stayed in mine. Neither the complex management nor my neighbors are happy about the situation either.

That sidewalk bump in front of the chair looks small, but it feels BIG!

Once I got outside of my apartment, I quickly learned that everything from entrances to parking lots to broken sidewalks affected my ability to feel safe. Navigating a city that's been my home for the most of my 52 years suddenly was completely different.

I was happy to learn both my trophies for Ms. PacMan as a teen and my love of motorcycle riding would come in handy learning to lean into the corners as well as maneuver the joystick that now controls my mobility.

When I sit down, I am safer. I have less risk of falling and injuring my hands and wrists that I depend upon to write. When I fell in November, I sustained a badly injured shoulder that is still "frozen" to this day.

Sitting down, I have gained a different perspective. I look at the world differently and the people of this world sure look at me differently, when they look at me at all.

Sitting down allows me to be safer while my feet and the rest of my tendons heal from the effects of the antibiotic, levofloxacin.