If You Have A Friend Who Talks A Lot...
Odyssey
CurrentlySwoonLifestyleHealth & WellnessStudent LifeContent InspirationEntertainmentPolitics and ActivismSportsAdulting
About usAdvertiseTermsPrivacyDMCAContact us
® 2023 ODYSSEY
Welcome back
Sign in to comment to your favorite stories, participate in your community and interact with your friends
or
LOG IN WITH FACEBOOK
No account? Create one
Start writing a post
Student Life

If You Have A Friend Who Talks A Lot...

You can say shut up. It's okay. It means you care. 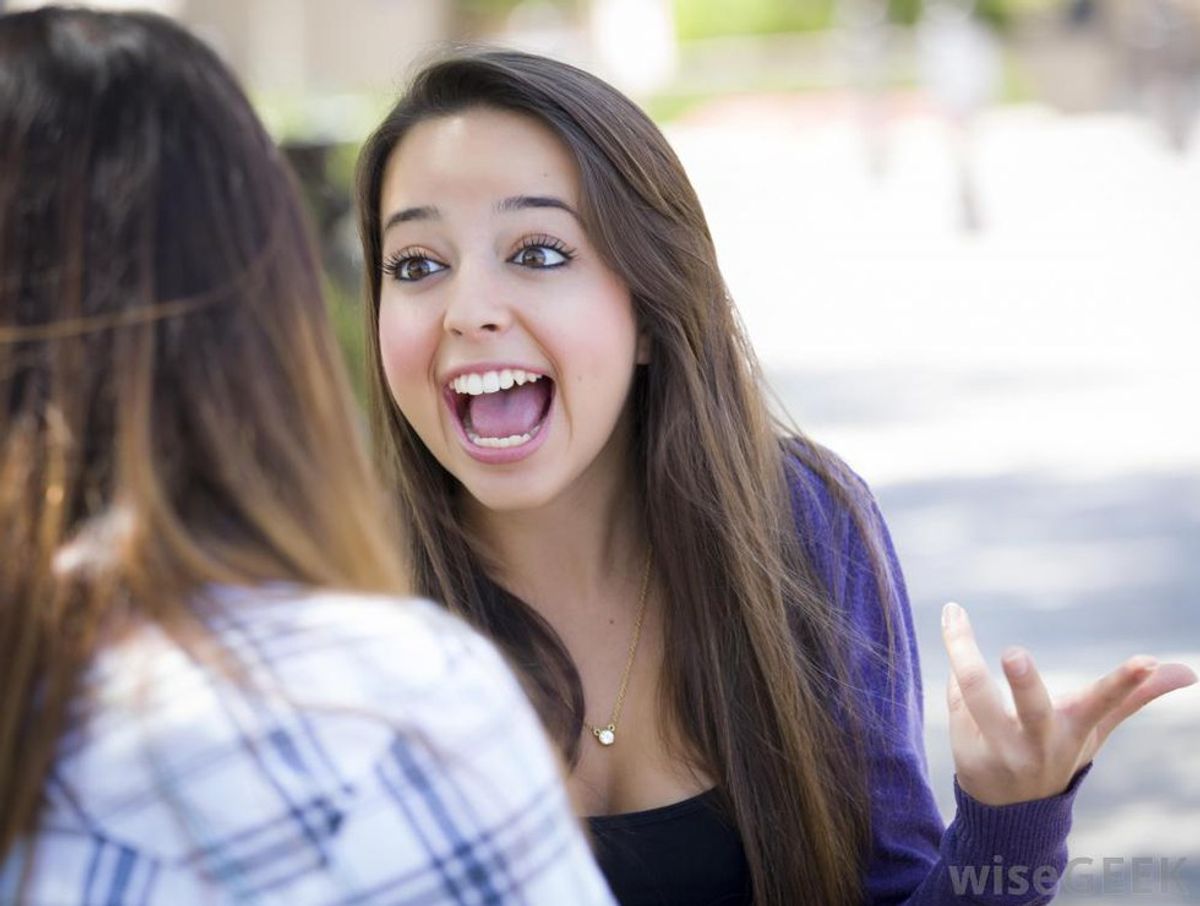 If you have a friend who talks a lot...

Remember that you love them. You may be watching them talk at around one hundred miles per hour, but remember that love you have for them. Maybe them talking to you first is the reason you became friends, or they were really funny, able to make jokes easier because they never stop never stopping. They always kept a conversation going when they were getting to know you. You may sometimes laugh at that little tick they have, but remember, you learned to love the whole person, rambling and all.

Understand why they talk a lot. They have anxiety. They don't like awkward silence. They just want to talk with you. This is their release. Talking too much does not happen because someone wants it too. Maybe they were shy as a kid, maybe they were bullied and finally spoke out. Talking isn't a bad thing. That friend who is a "talker" may actually be saying more than we think with their endless, run-on conversations.

Smile because they love you. If you have a problem, you can easily trust that they will give you as much advice as they can. They will give you so much advice, you will have too many options to choose them. They talk to you because they care about you. They talk a lot because they're comfortable with the fact that you know they talk, but you somehow just smile at them anyway. They are okay with you saying "shut up" playfully. If it was just a stranger telling them to be quiet, they wouldn't talk again. With you, their friend, "shut up" doesn't hurt as much. In fact, it makes those talkative friends laugh at themselves and their chattering, calming them down, making the check themselves without being embarrassed.

Be there for them if they stop talking. If they're quiet, if they haven't talked all day, if they haven't been they're usual quirky self, you can ask if they are okay. If they don't say much, there is something going on, but just know that they appreciate you. They know that they don't need to say all of their problems, and word puke up their lives, and you will be there for the person they are. Sometimes, giving them silence, and letting them be quiet is the best you can do. Maybe you start talking more. They would tell you to "shut up," and you would get a taste of your own medicine.

Know that they will be there for you too. You've dealt with their rambling, and they actually really enjoy hearing yours. They know that they talk a lot - they don't need you to tell them. However, when you need someone to listen, they are pretty great listeners. If you need someone to dance and sing with and be your wingman, they can do that too. Just because they talk doesn't mean they don't have many talents. Those friends who like to talk also can say a lot even without opening their mouths. They're expressive, they're excited, they want to see you get that number, and they got your back.