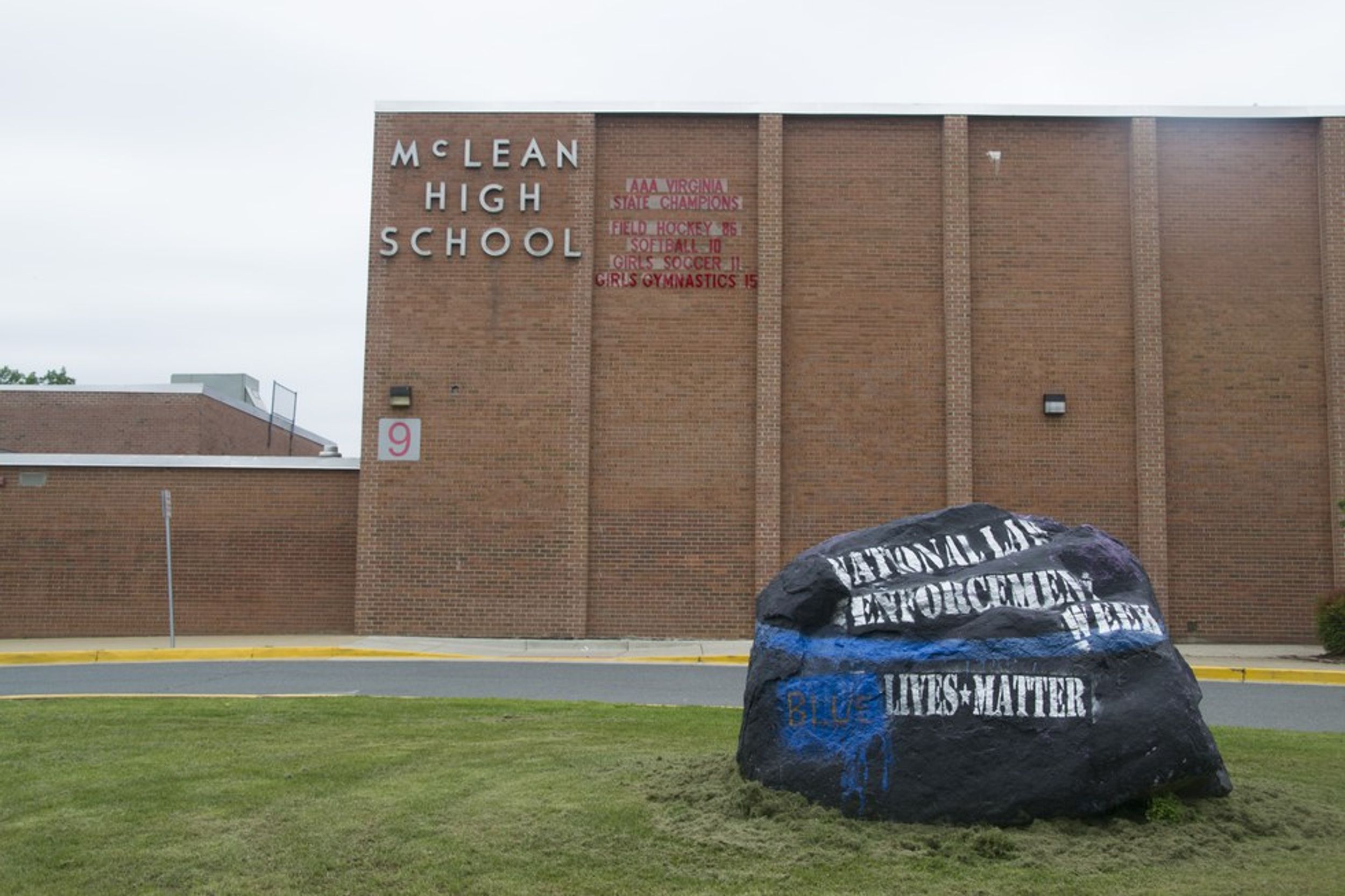 This past week at McLean High School, the second-best ranked high school in the state of Virginia, its student population became divided over a rock. Wait, what?

This week symbolized National Law Enforcement Week, and in honor of the town’s local police officers, several students painted the rock, a monument at the school utilized for sharing messages throughout the year. However, the message plastered on the boulder became an instantly controversial one; it read “Blue Lives Matter.”

While some students believed the message was simply trying to honor the enforcement officers who sacrifice their lives to protect communities, others felt the message targeted the “#BlackLivesMatter” movement, a campaign against violence towards black people established during the infamous shooting of African-American teen Trayvon Martin.

What arguably sparked the rock debate was an op-ed written by McLean senior Emily Robinson. Robinson argued that the message on the rock, one that was approved by the administration of the school, alienated minority students at the predominantly white high school.

In her article, Robinson said her argument “may seem extreme, but within the context of the ever-strained relationship between people of color in America and the police officers who kill---and blindly defend those who kill—McLean High School chose to stand against its students of color.” Robinson continued to write that “The slogan ‘blue lives matter,’ coined as a reactionary antithesis to the rallying cry ‘black lives matter,’ which in turn was debuted in reaction to the extrajudicial murders of unarmed black men and women has been used as a means of silencing activists and minorities nationwide.”

Robinson also touched on an incident earlier in the school year, in which the high school’s administration refused to allow McLean’s Muslim Student Association to post anti-racism posters following the November Paris attacks. The decision from the administration, in addition to the recent message on the school’s rock, some students argued, reflected a biased and overly restrictive administration.

Once Robinson wrote the article, the outspoken student body of McLean High took to social media sites to share their take on the rock’s message; dozens of students crafted tweets and Facebook posts, in addition to the many debates that were held in classrooms throughout the week.

Some argued, however, that medium of the conversations that were being held was not the best way to address the issue. Jake Barnett, another senior at McLean, argued,

“I mean, there is a conversation that needs to be had, but is this the best medium, a bunch of high schoolers complaining about a rock on Twitter?” Barnett said. “I don't think so. I guess there are stances we can take, because it does show that McLean is aware, and people at McLean aren't afraid to speak their mind, which is good, since that is not the case everywhere, but you know, it's May and I feel like a lot of us seniors have nothing better to do than get worked up over a rock.”

Barnett was also one of the students that disagreed with Robinson’s statements.

The tweets and Facebook posts invaded the feeds of hundreds of students. In response to these social media posts, students were confronted and even followed at school for sharing their opinions. While the author of the controversial op-ed, Emily Robinson, was followed by two people after school the day her post went live. Other students, like Allison Meakem, prefaced her Facebook post by admitting that several students approached her about her Tweets. Meakem’s same post, one that received 219 likes on Facebook, had a message that resonated with many students.

Meakem said, “Beyond the actual message written on the rock is the issue of politicization of a medium of expression at a public school. It doesn’t matter what the message is. Writing anything from ‘Hillary 2016’ to ‘Feel the Bern’ to ‘Blue Lives Matter’ (as is the case here) is inappropriate and unacceptable at a school funded by taxpayer dollars. Yes, it’s only a rock at the ‘Kiss and Ride’ at a high school, but it’s also how the school chooses to express itself and its collective goals and messages. It is the meaning and motives behind the action rather than the action itself that have an unquantifiable magnitude in characterizing an institution.”

This week-long debate about the “Blue Lives Matter” message was not only held at McLean High School; on the same day the Twitter feuds started at McLean, students at Dartmouth College began to argue over the same message posted on a police display at campus, one that was also honoring National Police Week.

Just as McLean’s “Blue Lives Matter” message on the rock was later covered up by an anonymous source, upset Dartmouth students defaced the police tribute on their campus and instead posted their own message. “In place of the “Blue Lives Matter” tribute, which was created during National Police Week, were four fliers reading: ‘You cannot co-opt the movement against state violence to memorialize its perpetrators. #blacklivesmatter,” The Dartmouth Review reported.

Whether you are “pro-Blue Lives Matter” or “anti-Blue Lives Matter,” what started as a simple message on a high school’s rock or on a flyer of a college’s bulletin board evolved into a serious online discussion. Regardless, there is no doubt that students of all political beliefs and ethnic backgrounds were not hesitant about sharing their opinions on the slogan; that being said, what do you think?

Caitlyn Morral
St Bonaventure University
2218
Wordpress
Odyssey recognizes that mental well-being is a huge component of physical wellness. Our mission this month is to bring about awareness & normality to conversations around mental health from our community. Let's recognize the common symptoms and encourage the help needed without judgement or prejudice. Life's a tough journey, we are here for you and want to hear from you.