Sonic's First TRUE 3D Adventure (I MEAN IT THIS TIME)!!! 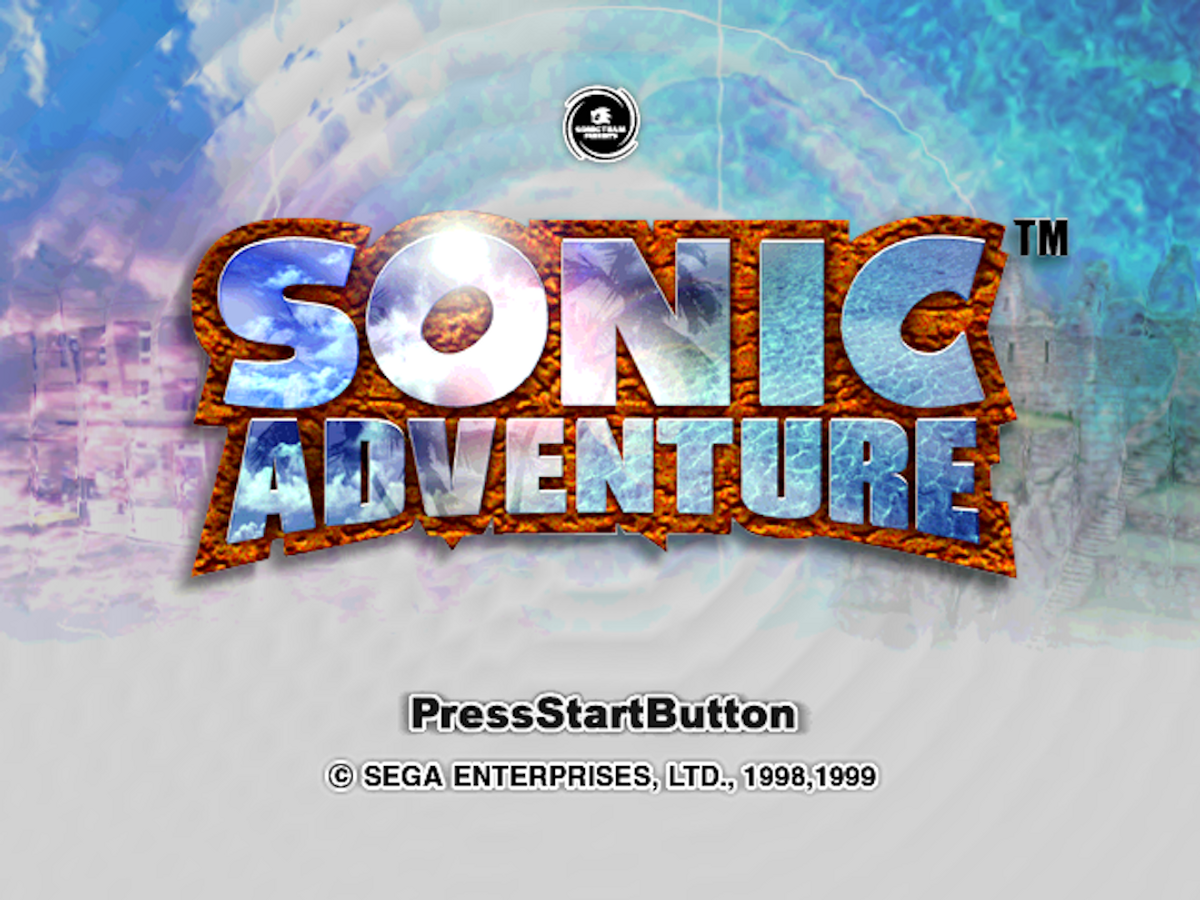 So, we're done with all of the Classic Sonic games, and Sonic Mania just recently came out! You think I'd stop there, but just you wait for a second. We still have Sonic Forces just waiting for us this Holiday season. In honor of that game coming out soon, I think it's time to look at Sonic in his modern direction... You guys ready to hear my thoughts on all 3D Sonic games, and some other titles that I have played? Let's get started then, shall we?

So, every new console needs a game, the killer app, to wow the audience and convince them to part with their hard-earned cash. The Sega Dreamcast (released around 1998 / 1999) was no different and this task fell to Sega’s favored mascot, Sonic the Hedgehog.

Before the Sega Dreamcast, Sonic had one hell of a hard time making the proper jump into the 3rd dimension, but it finally happened in 1999 with Sonic Adventure; the launch title that everyone’s been waiting for. However, Sonic Adventure didn’t quite manage to achieve the glory of being the Dreamcast's first 10/10 game, but it came close. Dreamcast Magazines worldwide universally agreed that Sonic Adventure was a quality title and all three awarded exactly the same mark of 90%. They were all impressed with the graphics and the amount of game available - mainly because of the 6 different playable characters. Still, all commented on issues with the camera being a frustration, glitches they have encountered and other pop-up issues. Is it still a great Sonic game right now?

Sonic’s nemesis, Dr. Robotnik (who now goes by the name of Dr. Eggman) is up to no good again. He has plans for world domination and has allied himself with a strange water based monster named Chaos. To achieve his goals he must collect all seven Chaos Emeralds and it’s up to Sonic and friends to stop him. This simple summary does not really do the storyline much justice. Surprisingly, we are treated to quite an in-depth storyline, played from several characters points of view (more on that later) along with a few explanatory, although confusing, flashbacks.

The game is split into three types: Adventure Field, Action Stages, and Sub-Games. The free roaming areas are named Adventure Fields. It’s in these locations where, via a little bit of exploration and puzzle solving, the plot is advanced. Occasionally you might find a useful power-up or other secret to aid your continuing adventures. The Adventure Fields are Station Square, the Mystic Ruins, and the Egg Carrier. They are small in number, quite limited in size and you’ll be passing through them quite a lot. The puzzles seldom get any harder than carrying a key from one area to another and should you find yourself lost, hints-a-plenty are available if you know who to ask. Personally, I rather just go from stage to stage, but I really don't mind these adventure fields and I love going through them.

The Action Stages are the main meat of the game and it’s here we are treated to a surprising range of game play styles thanks to the introduction of Sonic and his five allies, all of whom are fully voiced (another first, although not altogether one to be pleased about). First, you need to play as Sonic himself. Sonic's levels are excellent renditions of his 2D adventures. They are impressive and they do retain the feeling of speed but not without problems. Too often it is possible to glitch through barriers to an unfair death or bear witness to some truly disappointing pop-up.

As you proceed through the story you link up with the other five characters and unlock them as playable characters. They are Miles "Tails" Prower, Knuckles The Echidna, Amy Rose, Big The Cat and E-102 Gamma, and all of them have their own gameplay styles.

Tails' levels require you to race to the end of the level before another character.

Knuckles uses his treasure hunting skills to search for the pieces of the broken Master Emerald.

Amy is trying to escape the relentless pursuit of one of Dr Robotnik’s hench robots, who goes by the name of Zero.

E-102 Gamma levels have a distinct shoot-em up bent. When you get to the end of a level, you have to destroy something, and it doesn't matter if it's one of his E-Series friends or something as innocent looking as a Sonic doll.

Finally... ugh. Big is trying to catch his friend, Froggy...by fishing. Really?! Out of all the gameplay styles in this game, this is the one I hate the most! Why would I want to fish in a Sonic game?! How did Sega & Sonic Team think that this was okay?!?! In the end, if I want to fish, I'll go out to Canfield Park with Poppie and fish. Keep this s**t out of my Sonic game!

Also, I may enjoy Amy and Gamma's style of gameplay more than Big's, but you can take the three out of the main plot, and it will affect absolutely nothing!!! Sonic, Tails, and Knuckles' stories are on point, their gameplay is more addicting and they at least have moments with Chaos, the main villain of the game. With that in mind, you can ask yourself why do the other three have to be involved.

So yeah, none of these differing styles manage to eclipse Sonic's own levels (it is his game after all!) but Tails and Knuckles levels are a particular highlight. In addition to all this, you can return to any completed level a further two times to attempt to complete them with different goals.

Lastly, there are Sub-Games. You will find yourself snowboarding, piloting a plane, kart racing and even indulging in a spot of Sonic pinball. All are nicely done and provide a welcome distraction to the main adventure. The most substantial sub game involves the delightful Chao. Best described as a virtual pet these can be hatched and raised in the secret Chao Garden and then transferred over to the VMU for some portable shenanigans.

It wouldn’t be a Sonic Adventure without the occasional boss battles, and you pretty much end up fighting the same boss battle at certain points with differing characters. The boss battles themselves highlight one of the major issues with the game, it is just too easy and presents very little challenge. It’s not until the final levels that the challenge level increases a little and the game becomes massively more enjoyable as a result.

In 2003, Sonic Adventure was rereleased for the Nintendo GameCube and PC, and it was called Sonic Adventure DX: Director's Cut. In 2010, Sonic Adventure DX was rereleased on Xbox Live, Playstation Network, and Steam. No matter what version you play, the game shows some added features that were cut from the Dreamcast version. Two modes that I can remember are Mission Mode and Mini-Game Collection. Mission Mode is where Sonic and the gang travel through all Adventure Fields and Action Stages with certain missions to be accomplished. The Mini-Game Collection is where you can play some Sonic titles that were released for the Sega Game Gear (like Sonic Blast, Sonic Chaos, Sonic Triple Trouble, etc.), but you have to collect emblems in the main game to unlock them. The more emblems you collect, the more games that will be added to your collection.

Also, if you collected all 130 emblems in the game, you were able to play as Metal Sonic in Trial Mode...but I can never get to that point, haha.

It is easy to see why Sonic Adventure was declared as the killer app at the Dreamcast launch. It looks pretty good, it’s fun to play and there’s plenty to do. People would still complain about the camera issues, the repetitive free roaming and the relative ease of the whole affair. Also, a lot of people thought that Sonic was kinda late to the party (in terms of making his true 3D transition), and I somewhat agree. I mean, Super Mario 64 and Crash Bandicoot made their debut in 1996, and Spyro The Dragon made its debut in 1998. If Sonic Team thought of this game back in those times, we would've had a big competition in our hands. Some say that these are reasons as to why the game is a massive disappointment, but I don't mind in the slightest. To me, Sonic Adventure is a game I still love and play every now and then.