Satire: the use of humor, irony, exaggeration, or ridicule to expose and criticize people's stupidity or vices, particularly in the context of contemporary politics 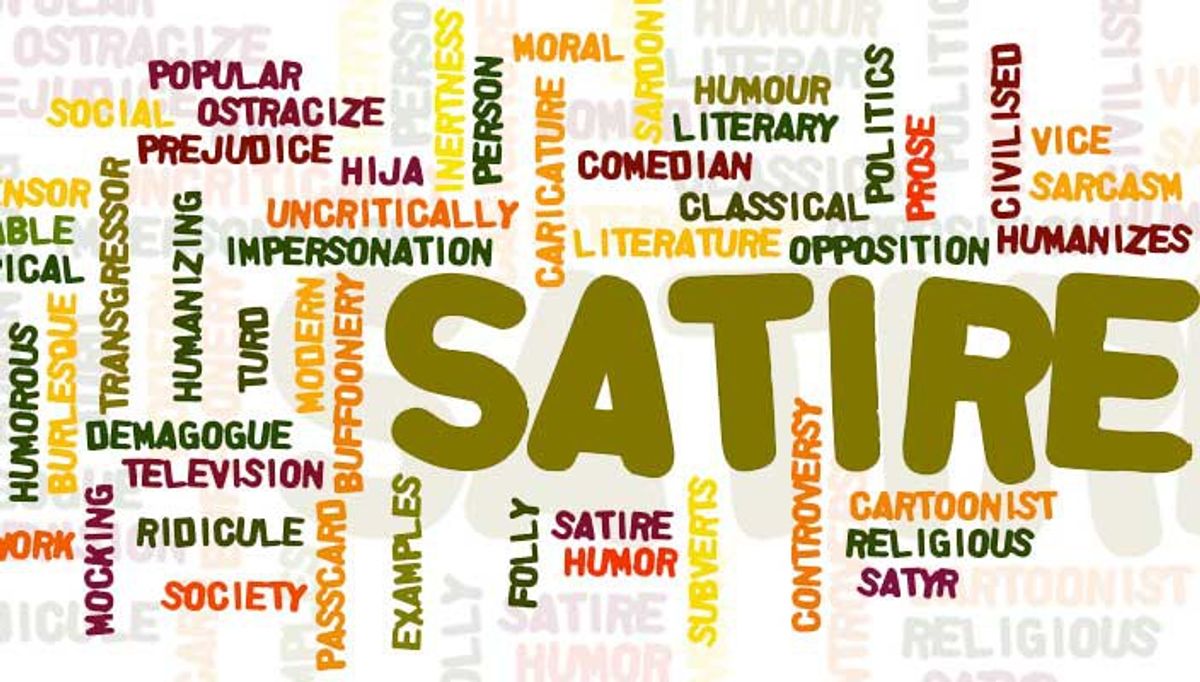 The word satire is thrown around a lot, and whether it was a vocabulary term in a class you hated, or something that's become an amusing part of your life, the truth is that satire is all around us and, knowingly or not, is involved in many of our favorite things. Countless books and poems are written on it, as well as comedic shows and hit movies. It shines a light of some of the darkest issues, such as racial tensions, economic struggles, or equality. Most importantly, it has become an integral part of our lives and a way we express our thoughts in an intellectual manner, without having to face the harsh reality of issues head-on.

If you don't believe me, here are a few examples.

"A Modest Proposal" by Jonathan Swift.

Writing an extensively detailed account of how to eat children, Swift points to the disregard and abandonment of the impoverished Irish by their English superiors, a large socio-economic issue at the time.

"The Help" by Kathryn Sockett.

Using something as ridiculous as segregating toilets, Sockett shows the humanity in all people while recognizing the severity of those who did stand up for change in a time when it was the unpopular thing to do. Also a fantastic movie with Emma Stone.

Talking about everything from political issues to the relationship people have with their moms, it is a highly entertaining way of addressing issues that we wish weren't there.

John Oliver's show is my favorite. Known for being more liberal, he jokes about everything from the Miss America pageants to the hostile reactions to Syrian refugees, while backing up his claims with valid facts and acknowledging the importance of all events occurring in society. (And for the record he gave the Miss America contestants a huge amount of credit for being able to answer questions like, "How would you solve ISIS?" in six seconds).

The list goes on -- from John Green's tweets to your teacher's sassy comments -- but satire has a legitimate role in society by forcing us to address uncomfortable issues that we would rather not discuss at all. In fact, I would argue that without popular TV shows and movies that incorporated satire, a huge audience of people would never think about so many important issues. But why does it take a humorous critique for us to be okay with talking about something controversial?

I'm not by any means advocating people to express their political opinion on Facebook (unless it's to disregard the ignorance of Donald Trump) or stir up a heated conversation at the dinner table, but there is value in being informed about the issues. Whether it's by asking people you trust and look up to about current events, or Googling the Black Lives Matter website to see what all the fuss is about, there is (often forgotten) value in being willing to confront the hard realities of our world.

Glorie Martinez
5
Why I Write On Odyssey