7 Ways To Deal With A Trump Supporter
Odyssey
CurrentlySwoonLifestyleHealth & WellnessStudent LifeContent InspirationEntertainmentPolitics and ActivismSportsAdulting
About usAdvertiseTermsPrivacyDMCAContact us
® 2023 ODYSSEY
Welcome back
Sign in to comment to your favorite stories, participate in your community and interact with your friends
or
LOG IN WITH FACEBOOK
No account? Create one
Start writing a post
Politics and Activism

7 Ways To Deal With A Trump Supporter 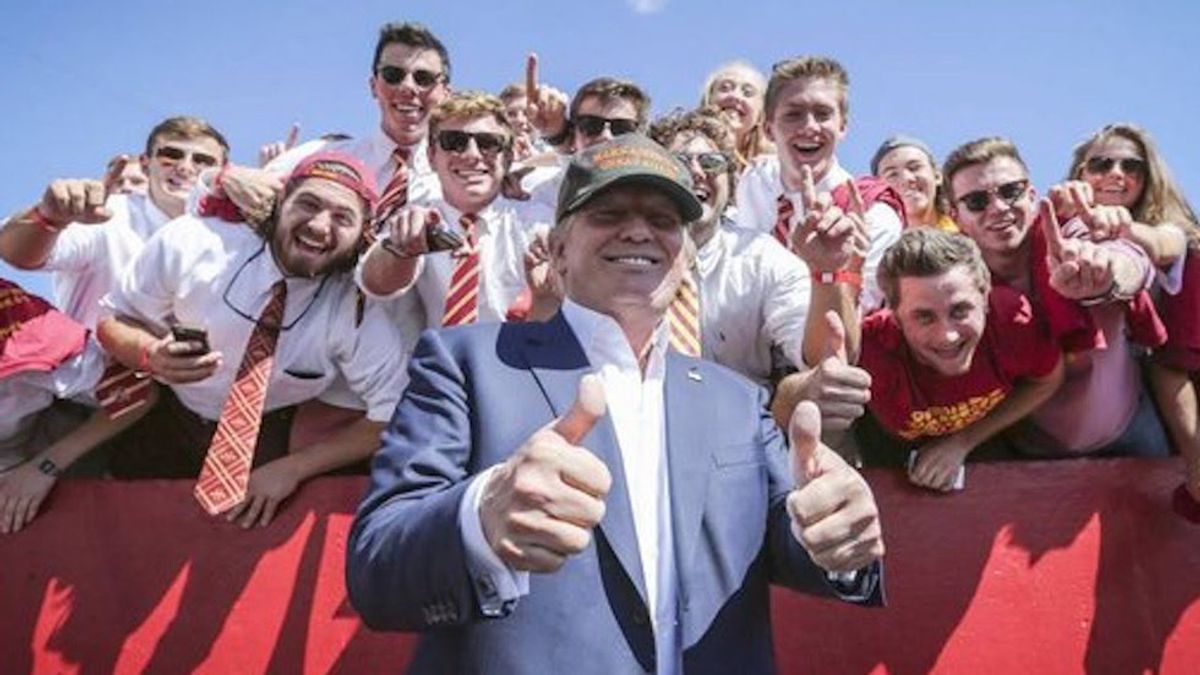 The worst has arrived, America. Donald Trump is the presumptive Presidential nominee for the Republican Party and that means millions of Democrats (and even some level-headed Republicans) will have to learn how to cope with an army of angry, overly-tanned Trump supporters. Luckily, there are a few simple tricks when it comes to dealing with those simple-minded dicks.

1. Avoid at all costs anyone wearing a "Make America Great Again" baseball hat.

The hat wearing crowd are most definitely the type of Trump supporters who would rather work through difficult ideological political questions with their fists rather than with their brains, so avoid the red baseball cap the way Donald Trump avoids women over the age of 26.

2. Do not mention trigger words like "experience" or "decorum."

Trump fans do not believe in actual experienced lawmakers being president, nor do they believe in presidents representing the United States of America in a positive light. They do believe, however, that the all day breakfast at McDonald's is evidence of divine intervention.

3. When speaking with a Trump supporter, stand up as straight as possible (straight as a border wall perhaps).

If you can convince a Trump supporter that you might be a segment of the legendary border wall Overlord Trump will build to protect the Stars and Stripes from the "rapists" coming from Mexico, they may just break out into organized and disturbing chants.

4. If a Trump supporter brings up politics, try to forget everything your grandmother has taught you about manners to level the playing field.

Trump supporters are a feisty bunch. If you find yourself locked in conversation with a Trumpist (trendy nickname for Trump supporters) be sure to disregard all civilized rules of polite society as to not intimidate and scare the Trumpist away before you spit the truth about Trump's hefty fortune.

5. If r when a Trump supporter fangirls over Trump's honesty and business success, politely direct them to this video produced by John Oliver.

Not only will it give you around 21 minutes of peace and quiet to reflect on the lowest lows of the radicalized conservative right, but it may also give the Trump supporter some pause before they buy anymore pro-Trump bumper stickers for their cars.

6. When encountering Trump fans wearing any articles of clothing with Trump's face on it, be sure to apply extra sunscreen to avoid the glare from his clementine tan.

While earlier researchers believed the rays shooting from Trump's tastefully tanned face were only dangerous if seen in the flesh, recently scientists have said that the damage can be projected through tacky T-shirts and other Trump related iconography.

7. When encountering a Trump fan, always be sure to remind them that Trump isn't running for "Worst Hairpiece" or "Expression That Most Adequately Portrays The Evils of American Society."

The man is running for president of the United States. Maybe, if we can spread the word that the Miss America Pageant doesn't actually affect American politics, the Trumpists of the world might remember that they are supporting a reality show joker and con man as a legitimate Presidential candidate.

There is always danger when dealing with a Trump supporter, but hopefully these seven helpful tricks can spare you a few agonizing conversations.

The US is a country founded on free speech which means that even if we do not like listening to the garbage spill out of the mouths of Trump and his minions, we do not have the legal right to actually punch them in the face. Thus, by using these simple tricks you can survive your interactions with Trump supporters this election year.

Nicole Marie Nigro
Individual Creator
1799
c1.staticflickr.com
Where to start...... Let me start with the cliche that life throws us curveballs and what we do with it is what counts.