Who Can Be Trusted When You Can't Trust Your Mind? 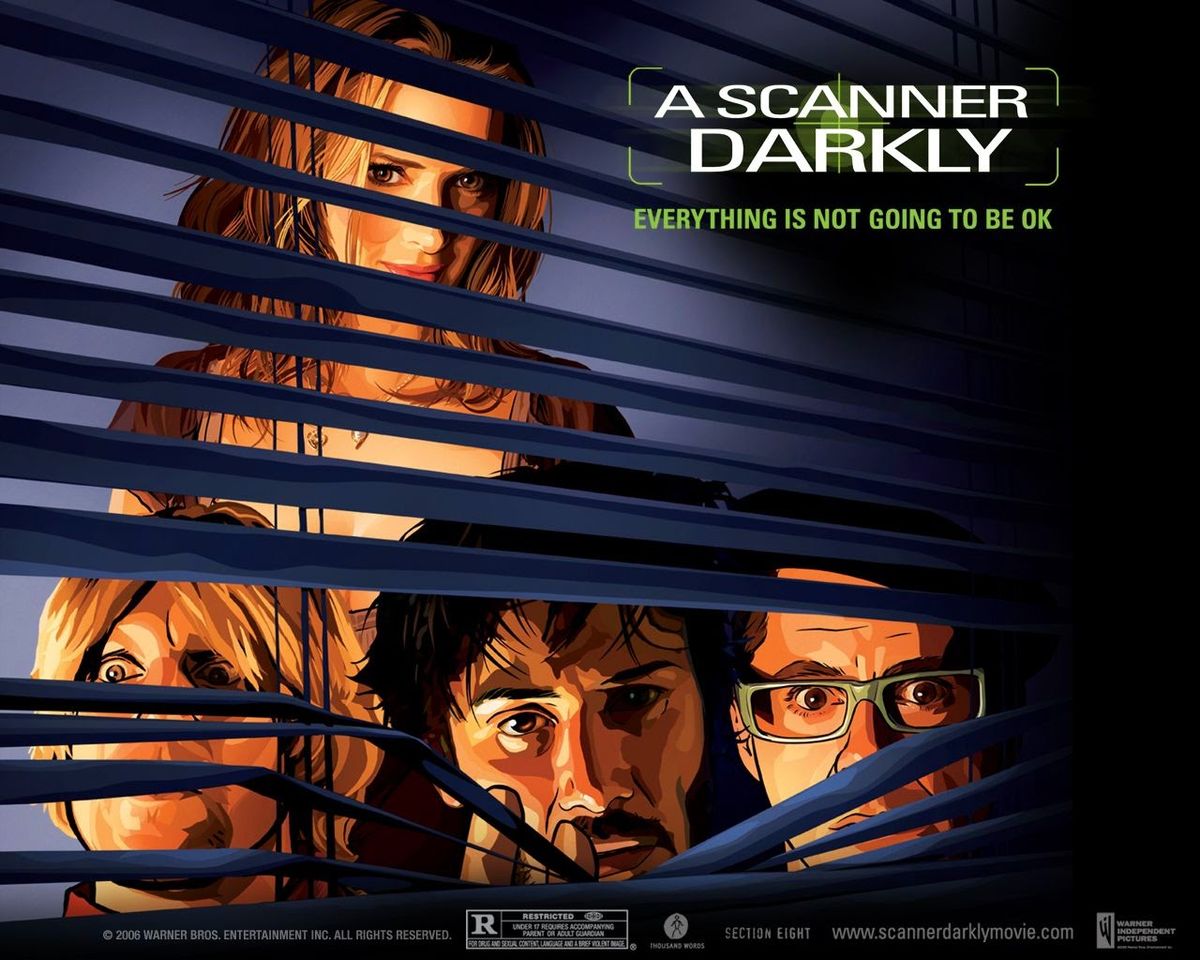 A Scanner Darkly is a sci-fi film that makes you forget it’s sci-fi. An hour and 40 minutes long, it contains drug use (in the form of pills, but other drugs are mentioned) and nudity. If you have no problems with any of those things, then press on.

The story is placed in the near future, the war on drugs backs the U.S government into a corner as a new deadly drug called "Substance D" hits the streets. With a high addiction rate and leaving its victims practically brain dead, Substance D would be dangerous enough if it weren’t for the fact that there are no leads as to who is producing it. With this information, comes our main character and storyline.

Robert Arctor (played by Keanu Reeves) is an undercover narcotics cop assigned to identify key players in the Substance D distribution and report on them. However, in order to keep his, and other undercover agents, identities safe, they wear "Scramble Suits" that randomly shift their appearances when they’re at headquarters or speaking in public.

This absolute anonymity is in contrast to total surveillance the agency has, with cameras and tapping into phones, Robert Arctor becomes the main subject of the protagonist’s investigation. But, with that being him, he can’t very well arrest himself, but he also can’t reveal his identity to anyone even within the agency.

Living a double life, one with secrets and bureaucracy, the other living with eccentric and unstable drug addicts; the stress and the mind-altering effects of Substance D that he takes, drives him further and further into himself as he slowly forgets which life is real.

Plotwise aside, A Scanner Darkly is not your common movie. It’s entirely in rotoscope. Rotoscope is when live people are filmed and every frame of the footage is used as a reference or it’s traced over. In this case, every frame is animated over. It took 23 days to film the movie, but 18 months were required to animate it.

It kind of looks like you’re watching a live-action movie but you’re really drunk and not paying that much attention.

The scramble suit in action

It plays well within the context of the story, as Robert delves deeper into his addiction his brain starts to malfunction. It’s as if we are seeing the world through his or another Substance D addict eyes. But perhaps that’s taking too deep a perception on the film. It’s more likely that the director (Richard Stuart Linklater) wanted certain visual elements that couldn’t be achieved had it been filmed live.

Being based on a book, the introspections that Robert Arctor has are a bit more poetic than how people usually have, but Keanu Reeves performs the role well. His listless, sort of drifting as Robert projects an ennui that we all feel from time-to-time in our daily lives and the self-destructive, intrusive thoughts that we have about changing it. But that’s a topic for another article.

All in all, this is an interesting movie, but does interesting mean it’s good? In this case, I feel it is because this is my review. Taking risks to yield rewards is a principle that can be applied to basically anything, the creative risk (and great effort) to have the entire thing animated rather than showing the live footage and animating certain parts off greatly give the whole thing a trippy feel, unlike any other movie, without being avant-garde or incomprehensible. It’s not award-worthy (maybe animation wise, it is) but it’s a good movie. If nothing else it’s worth to see Robert Downey Jr. animated which makes him even more eccentric.

If you got an hour and forty minutes to kill and want to see a kinda weird movie, then I recommend watching A Scanner Darkly. I hope you enjoy it!