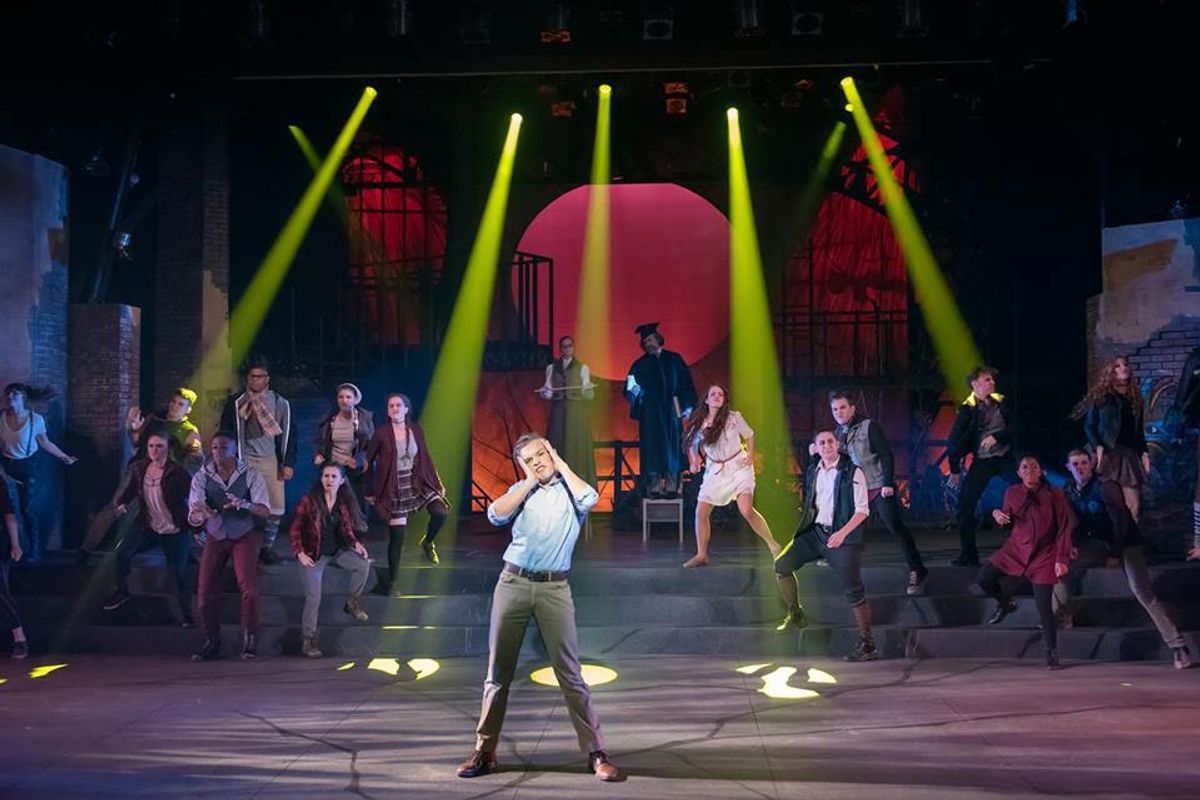 The musical “Spring Awakening” has a unique place in my heart. Not only did I see the show on the national tour, but I also was featured in a student production of the show through an organization called Florida Players in UF's 200-seat McGuire Black Box Theatre. When the University of Florida School of Theatre and Dance decided to present this show as part of its mainstage season in its 400-seat Constans Theatre, I was anticipating to see it being taken to a higher level. While the show has its specific demands, my unique relationship with “Spring Awakening” made my job of critiquing the show as difficult, since I intend to write reviews with as little bias as possible. Director Tony Mata, after staging various musicals deemed traditional in style (“Guys and Dolls,” “Sweeney Todd,” and “The Drowsy Chaperone”) is up to a huge challenge staging a rock musical that does not necessarily fall into the book musical form.

Based on a censored 1891 play by German author Frank Wedekind, “Spring Awakening” was first developed by composer Duncan Sheik (of “Barely Breathing” fame) and librettist Steven Sater in 2004. After numerous workshops and a successful Off-Broadway run at the Atlantic Theatre Company, the musical would transfer to Broadway in 2007, where it would win eight Tony Awards including Best Musical, launching the careers of performers like Lea Michelle, Jonathan Groff, and John Gallagher, Jr. The show was recently revived on Broadway in 2016 by the Deaf West Theatre Company, which featured deaf and hearing actors performing side by side.

This musical concerns the lives of teenagers living in a conservative village in 1890’s Germany. Melchior Gabor (Chaz May) is a precocious young man who rebels against the authorities of school and the church. Despite being the brightest pupil at his school, his curiosity places him in unfortunate dilemmas. When his deep yet anxious best friend Moritz Steiffel (Thomas Nightingale) has difficulties sleeping due to his various sexual dreams, Melchior writes him an essay explaining human sexuality (with “lifelike illustrations”). Wendla Bergman (Emily Lewis) is curious about her blooming young body, but her mother refuses to teach her about the birds and the bees. When she and Melchior encounter each other for the first time in years, they develop strong and intimate feelings for each other. Meanwhile, there are also side characters like Hanschen (Sergio de la Espriella) and Ernst (Joshua Andrews) attempting to conceal their homosexual relationship from their peers, Martha (Valerie Torres-Rosario) coping with physical abuse by her father, and Ilse (Lauren Robinson) who runs away to an artists' colony after complaining about her father molesting her.

This show had superb production values, including contemporary costumes designed by Samantha Kennedy, an almost jungle-gym like set designed by Colton Spurlock (which looked aesthetically pleasing despite having weak sight-lines for audience members in the front row), and computerized lighting with plenty of moving fixtures and a variety of colors designed by Tiana Alderson and Dalton Hamilton. The show’s ensemble, while slightly dragging in energy for most numbers (excluding the rousing eleven o’clock number “Totally F**ked”), should be praised for their rhythmic accuracy and clean harmonies (thanks in part to music directors Anthony Offerle and Matt Morgan). Choreographer Lisa Clarson (Broadway: “A Funny Thing Happened On the Way To The Forum” with Phil Silvers, National Tour: “A Chorus Line”) gives the actors opportunities to truly jump out of their skin, almost to the point where select cast members completed some acrobatic stunts.

When mounting a production of “Spring Awakening", the most common trap that colleges and professional theatre companies fall into would be having spot-on elements that fail to mesh due to the musical’s almost fluid and vignette-like plot. While these production elements were strong on an individual level, it was difficult for these elements to appear as one cohesive unit.

There were moments where Clarson’s choreography detracted from the principal characters’ stage business. Similarly the vocal ensemble struggled to work on dynamics, singing loudly while select performers were singing solo lines. While the “teenagers” in the ensemble were wearing red, black, and gray clothing associated with 90’s grunge, the two adult characters (played by Jeff Drushal and Amanda Hayter) wore period attire associated with the original production. Whether or not this was an intentional design choice, most first-time audience members may be confused by the contrasting attires.

The one time where these elements, along with Alderson and Hamilton’s lighting, clicked would be during “Totally F**ked,” which truly grasped the spirit of the show’s messages of teen angst and confusion.

While May is able to depict a sense of anger toward society in a believable manner in his portrayal of Melchior, his voice seems to be too bright for the music he sings. While May’s tone is perfect for musical comedies like “The Drowsy Chaperone” and “Spelling Bee,” it seems less appropriate for “Spring Awakening.”

Lewis, on the other hand, has the vocal chops essential for Wendla. She does not overdo a belt sound, and maintains a clear legato line, which ironically complements the indie rock sound of Shiek's score.

As Moritz, Nightingale is able to bring a sense of emotional depth to his role. During "Don't Do Sadness," he is the only actor onstage, in nothing but pure darkness minus one spotlight. At this point in the show, his character is about to commit suicide after failing his exams and being disowned by his father. As an actor, one might cringe due to self consciousness when performing this scene. However, Nightingale is able to display so much vulnerability at a cathartically jarring moment in the musical. Despite this, Nightingale tends to rush his lines to the point where his diction is unclear. Given his character's hyper and anxious nature, this flaw can be forgivable.

The strongest vocal powerhouses of the evening, however, would be Robinson as Ilse and Torres-Rosario as Martha. Their duet "The Dark I Know Well" showcases their ability to sing with an edgy and low vocal color. Given the style of this score, I was surprised to hear both vocalists support their tone with strong breath and energy, especially since both singers are known for their more classical soprano roles (Torres-Rosario as Maria in "West Side Story" and Robinson as Christine Daae in "Phantom of the Opera" and Musetta in "La Boheme").

This production of "Spring Awakening" will leave you with plenty of laughter and tears. Having seen the production on opening night, I anticipate that this show will refine itself and form a more cohesive spectacle throughout its one-and-one-half-week run. While this production is obviously not suitable for children due to its sexual content, talk of suicide, violence, and adult language, this production will give you the desire to return to a simpler time in an unusual way. With an electrifying score, a cast that is predominantly strong vocally, and state-of-the art technical features, this show could be the hottest ticket in Gainesville--after two or three performances of fine tuning.

Presented by the University of Florida School of Theatre and Dance (Dr. Jerry Dickey, Director).

Book and Lyrics by Steven Sater, Music by Duncan Sheik.

In the Constans Theatre on the University of Florida campus.