How much cheesiness is too much? 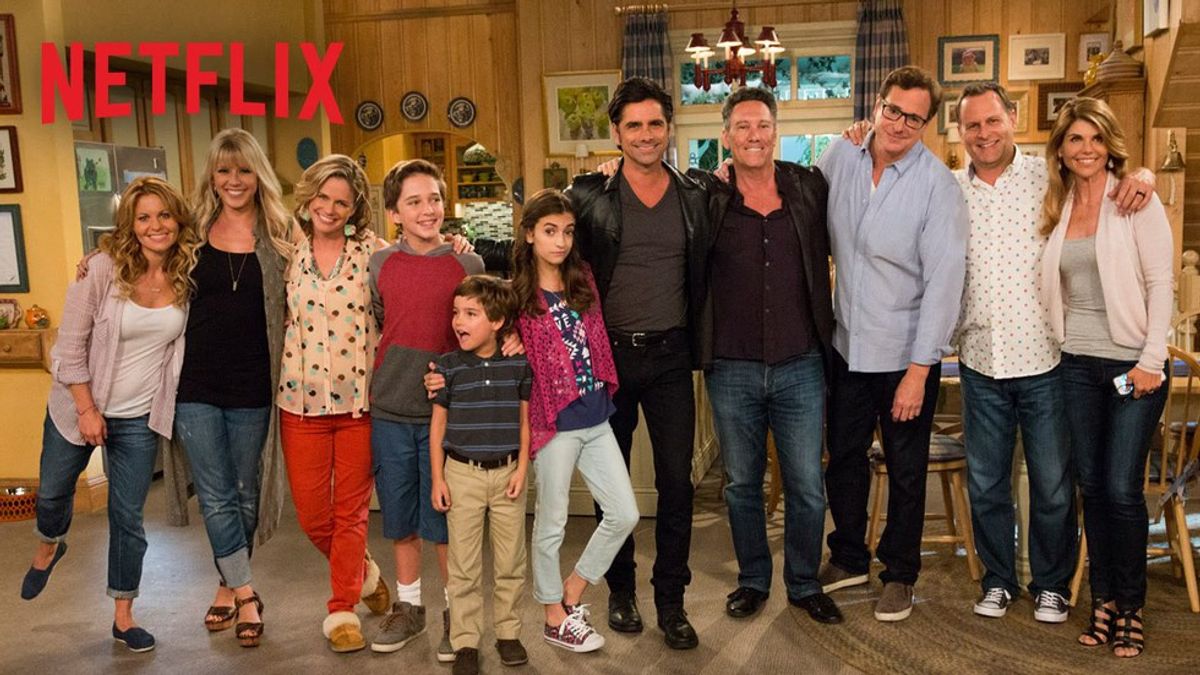 When I was about 9 or 10, I enjoyed watching Full House reruns on Nick @ Nite and ABC Family. I didn't necessarily watch the show at the same time the rest of the world enjoyed it, but I know that despite the recurring catchphrases, predictable plots mixed with slapstick, and live studio audience, the show was always destined to make you smile. The show's warm and heartfelt tone made you wish you were living in '90s San Francisco with the Tanner-Katsapolis clan.

In 2015, Jeff Franklin and Bob Boyett teamed up with Netflix to create Fuller House. When the first season aired on Netflix, I was curious as to how it would stack up. I wasn't the first person to address that the basic plot line of the show was rehashed. Instead of a widowed talk show host named Danny Tanner (Bob Saget) who lost his wife in a car accident, we have his widowed veterinarian daughter DJ Tanner-Fuller (Candace Cameron-Bure) who lost her firefighter husband in the line of duty.

Similarly, DJ's three sons seem to be the male equivalents of DJ, Stephanie, and absent Michelle (Mary-Kate and Ashley Olsen) as children. Jackson (Michael Campion) is a typical preteen boy dealing with crushes, puberty, and football. Max (Elias Harger) is a nerdy and over-enthusiastic second-grader who always acts like a mini-adult. Tommy (twins Dashiell and Fox Messit) is the baby of the family--literally taking his first steps and saying his first word (spoiler alert, it's "Stephanie") during this season.

In the first season of this spin-off, Stephanie returns from performing on a European tour, under the stage name "DJ Tanner," Kimmy is mending a crumbling relationship with her fiancé and baby daddy Fernando (Juan Pablo Di Pace) and raising her preteen daughter Ramona (Soni Nicole Bringas), and DJ is trying to pick up the pieces after her husband's death.

When Danny lets DJ and her sons move into the house she grew up in, Stephanie and Kimmy volunteer to help DJ in raising her kids--forming the She Wolf Pack. When DJ is encountered by her high school sweetheart Steve Hale (Scott Weigner), the two rekindle their old relationship. However, DJ is also smitten for her business partner Dr. Matt Harmon (John Brotherton). The main story arc of the season was the love triangle between DJ, Steve, and Matt.

After DJ dumps both guys in order to do some soul searching, she decides which man she wants to be with. However, it is revealed in the first episode of the new season that Steve and Matt have girlfriends. Matt is dating a young and fitness-obsessed woman named Crystal (Gianna DiDonato), while Steve is dating a woman named CJ (Virginia Williams), whose personality resembles DJ's to a "T." One of the main running gags of this season is that Steve accidentally calls his current girlfriend by his ex-girlfriend's name (to the point where the joke becomes stale).

However, after DJ and Matt perform surgery on Max's dog Cosmo, the two confront their feelings for each other, and they start dating. Despite this, and despite the fact that Steve wants to propose to CJ, DJ is still confused about who she should be with. However, by the end of the season, DJ writes Steve's proposal to CJ (talk about awkward) and decides to ultimately stay with Matt (despite later revealing that she initially chose Steve in the beginning of the season).

The remaining story arcs that occur in this season include Max creating a sustainable farm for his "One Kid Can Make A Difference" project in school, Jackson trying to get Ramona's best friend Lola (Ashley Liao) to go out with him (again), and Stephanie developing a relationship with Kimmy's deep yet idiotic brother Jimmy Gibbler (the writers could have picked a better name).

Having watched Season 2 in its entirety, I was able to make a few observations within just minutes of watching the first episode.

First of all, references to plot points and gags from the original Full House are being spat out like seeds from a watermelon.These recycled tropes would range from Stephanie confusing Oakland, California for Aukland, New Zealand, Jackson changing the grades on his report card from C's to A's (like DJ turning an exam grade from an F to an A with the stroke of a pen during the Full House episode "Working Girl"), and Ramona's first kiss (which almost mirrors DJ's first kiss during the episode "13 Candles"). I have no idea as to whether the writers of this show added these lines for nostalgia purposes or out of mere laziness. However, these bits do not seem to be as fresh as they once were back in the '90s.

Another problem I have with the series is its attempts to mimic the tropes of a modern Disney Channel sitcom--with adult writers sprinkling over-used and washed-up slang terms into dialogue in order to make it sound like it came out of a pre-adolescent's mouth. Some of these terms include, but are not limited to: "bae," "the friend-zone," and "shot down." These phrases, while legit, seem rather forced in delivery.

And speaking of forced, the show's significant number of guest stars (ranging from the late Alan Thicke, Dancing with the Stars' Bruno Tonioli, and the New Kids on the Block) seem shoved in. Thicke plays Crystal's socially awkward grandfather who acts as a date for DJ during her game night. His addition to the plot seemed useless, and rather disturbing for a show as wholesome as Fuller House. Tonioli is cast as Giuseppe Pignoli, a world-renowned dance coach who auditions Ramona. His character could have been expanded in future episodes, and would have been the perfect opportunity for us to showcase Bringas' real-life dance chops. Unfortunately, we never see Tonioli after this episode. From a plot perspective, I enjoyed Full House using DJ's favorite boyband, The New Kids on the Block, as a plot device in the show. However, I wish that the band was not portrayed as mean-spirited or arrogant when singing an intoxicated DJ "Happy Birthday."

While this season of Fuller House had the heart and hugs that made the first season and the entire original Full House series great, flaws in execution made the show's serial plot and gags fall on the wayside. With trite guest appearances and jokes ripped off the pages of Full House scripts, no wonder the show's ratings dropped 67 percent this season. I was anticipating that the creators of Fuller House step up its game rather than ride on the coattails of a successful first season. I know that sitcoms like Fuller House can allow audiences to feel warm and fuzzy during times of potential political, social, and economic turmoil. However, should this show be renewed for a third season, Fuller House may require some mild repairs.