For your next vacation, ditch the tropical island and consider the land of ice and fire. 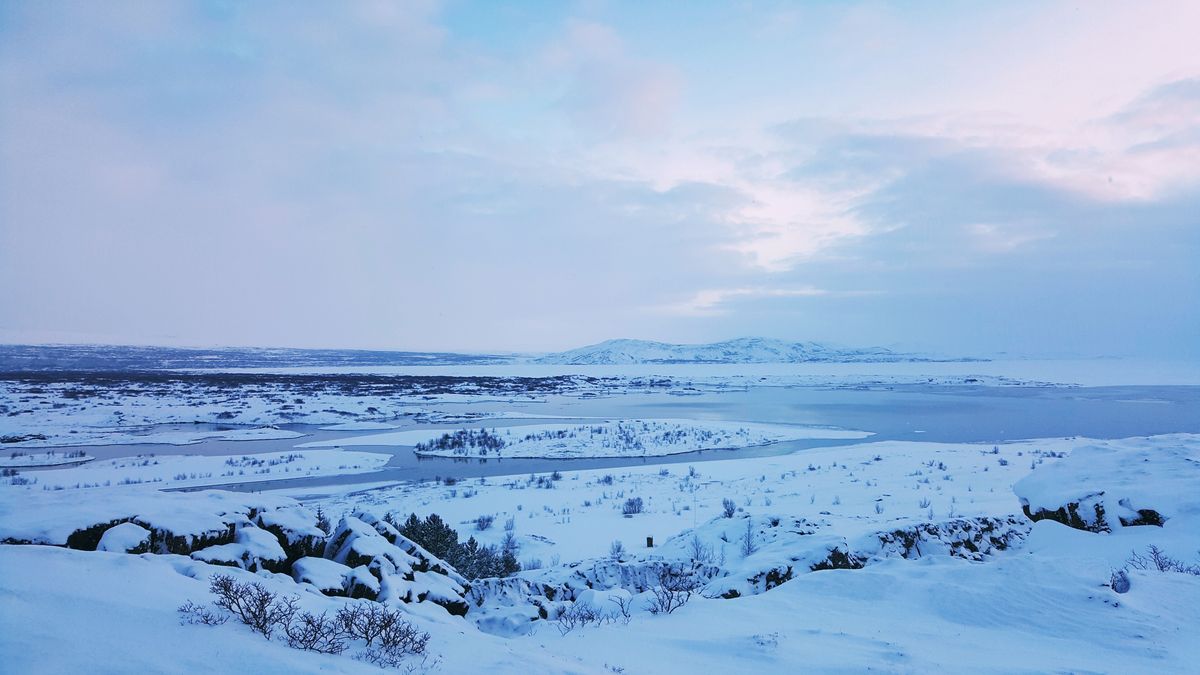 Although it's typically not at the top of most peoples' lists of dream destinations, Iceland is quickly becoming a popular vacation spot. I recently returned from Iceland, where I stayed in the capital Reykjavik (yes, I went to Iceland in the winter.)

It was easily the best and most memorable country I have ever been to for so many reasons ranging from the people to the magnificent natural wonders it is home to.

I've compiled a list of the most wonderful parts of my trip (but believe me, there are a lot more) and have included some of my own personal photos. Hopefully, I can convince more people to bump a visit to this beautiful country up on their bucket lists.

This airport is absolutely stunning, complete with a stain-glass Viking mural and a freaking juice bar. Being a native New Yorker who is accustomed to the dreary, chaotic mess that is JFK or LaGuardia Airport, I was in awe of how clean and bright the terminals were and how easy it was to find healthy airplane snacks. It even had a full-size bookstore with books written in English as well as Icelandic. This airport's many amenities were quite a warm welcome to Iceland (even though we arrived at 6 a.m.).

We stayed at the wonderfully colorful and cozy Hotel Reyjavik Centrum, located in the bustling downtown Reykjavik. The staff was so kind and accommodating, and they also gave my boyfriend and I some insight into the infamously unpredictable Icelandic weather patterns. The only negative aspect of our stay was that our room did not have a queen size bed, but rather two twin beds pushed together... yeah, we were confused as well.

3. The surprising amount of vegan food

It is actually surprisingly easy to eat vegan in Iceland. The list of vegan and vegetarian-friendly restaurants is growing by the year with more and more traditional eateries adding meat-free options to their menus to appease the tourist crowd. Once a land ruled by meat soup and fish entrees, Iceland is gaining serious street cred in the vegan community. Personally, I visited two completely vegan restaurants, one called Glo and another called Kaffe Vinyl. Others, such as The Laundromat Cafe and Bergsson Mathus (where the delicious breakfast pictured above is from), were very veg-friendly.

Reykjavik is known for its quirky colored houses that line most of its downtown side streets. We passed many bright red, yellow, blue, green, teal and even purple houses while on our walking ventures.

It seemed that no matter where we walked in Reykjavik, we could always see the mountains looming in the distance. Most easily seen at the waterfront or at the top of the city's tallest church (which is where I was able to photograph the view pictured above), these mountains astounded me again and again over the course of my week in Iceland.

Street art is a large part of Reykjavik culture, and there is an abundance of it throughout the city. Many storefronts and other buildings are adorned with intricate and often colorful murals crafted with obvious skill. I took the above photo on my first day in the city when I was quite taken aback by the size and detail of this particular mural.

We spent an afternoon at the Blue Lagoon, Iceland's geothermal spa. Visiting this spa is quite an experience and includes getting naked with total strangers since every visitor is required to shower (without a bathing suit) before entering the lagoon. Once this discomfort was over, however, I was met with a steaming blue hot tub made by Mother Nature herself. I also treated myself to a goopy silica face mask and fuzzy robe. It even started snowing while I was in the lagoon, so it was an overall beautiful but surreal experience.

8. The geysers and waterfalls

Iceland is home to many natural other wonders, notably its many breathtaking waterfalls. During our trip, we were lucky enough to visit this beautiful twin waterfall in South Iceland (courtesy of our brave bus driver, who had to do quite a bit off-road driving through very deep snow). This waterfall, called Hjalparfoss, is one of two major waterfalls we visited during our stay. We also got a chance to see Strokurr, a geyser that erupts every 4 to 8 minutes and spouts water up to forty meters into the air.

Although I was not lucky enough to see the Northern Lights quite like they are pictured above, I was able to see their greenish tint sprinkled ever so slightly among a blanket of stars. Unfortunately, it was much too windy to view the lights during my scheduled Northern Lights tour. However, I did not come away from this night empty-handed. Iceland's night sky is easily the most beautiful, star-filled sky I have ever seen, and I was not aware it was possible to see so many bright stars with the naked eye. For this, I can graciously thank Iceland's minimal light pollution, which contributes to its high number of Dark Sky sites.

Admittedly, before visiting Iceland I had never been in a country where English was not the dominant language. It was strange at first to see road signs, store names, and menus in a completely unfamiliar language (although I did learn a few basic sayings before my trip), but by the end of the week, I found myself completely enamored with Icelandic. It is a beautiful and clever language in sight and in sound, and I hope to learn some more basic sayings before my next trip and to perhaps even master the difficult pronunciation of Icelandic vowels.

Lastly, and probably most notably, the Icelandic people are truly what makes Iceland so great (and I'm not the only one who thinks so). Everyone I came across, from cafe baristas to cab drivers, truly wanted to ensure my time there as a tourist was memorable. I received many recommendations, heard many anecdotes, learned about many aspects of Icelandic history and was even given some free drinks at a local pub due to the friendly, kindhearted people of Iceland. Icelanders are the main reason I can see myself going back to this wonderful country, hopefully in the not-so-distant future.