3 Questions (And An Observation) I Have About "Gravity Falls"
Odyssey
CurrentlySwoonLifestyleHealth & WellnessStudent LifeContent InspirationEntertainmentPolitics and ActivismSportsAdulting
About usAdvertiseTermsPrivacyDMCAContact us
® 2023 ODYSSEY
Welcome back
Sign in to comment to your favorite stories, participate in your community and interact with your friends
or
LOG IN WITH FACEBOOK
No account? Create one
Start writing a post
Entertainment

3 Questions (And An Observation) I Have About "Gravity Falls"

Some more Cartoon Conspiracies coming at you! 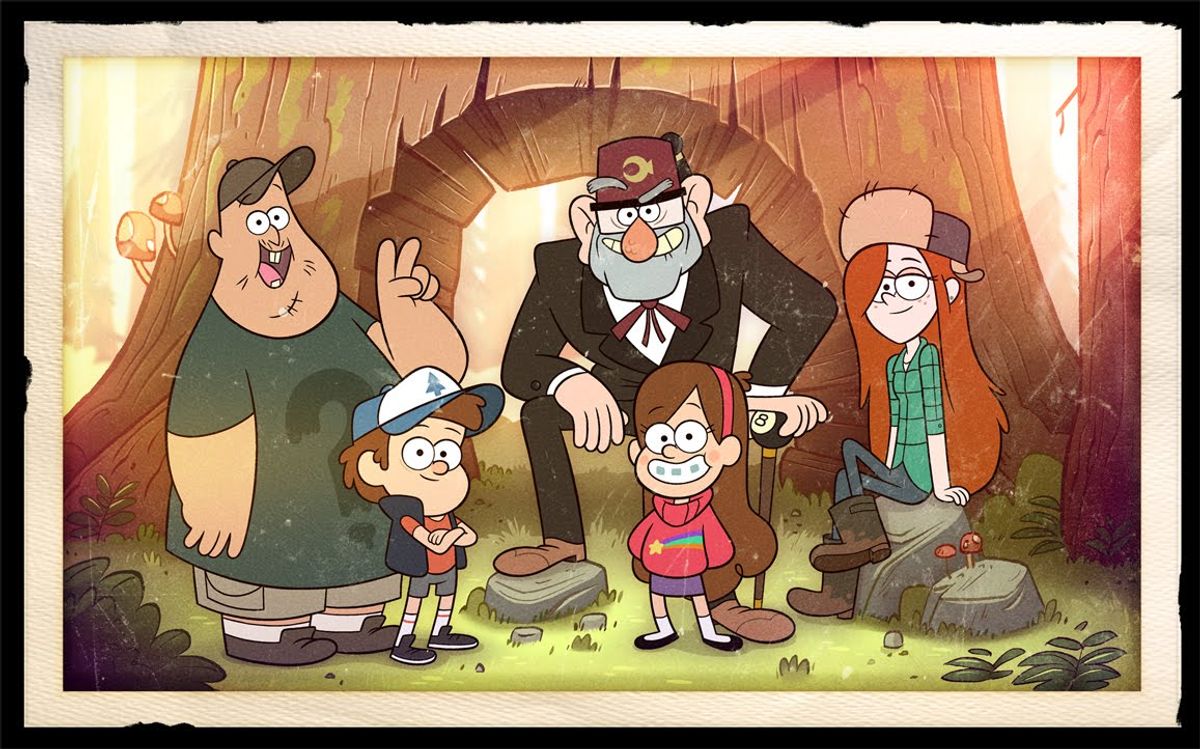 Hello and welcome back to another fun-filled, eye-opening Cartoon Conspiracies. Today we're gonna talk about one of the most underrated cartoons out there: "Gravity Falls."

"Gravity Falls" follows the Summertime adventures of Dipper and Mabel Pines, twins from Piedmont, California staying with their Great Uncle (or Grunkle) Stan at his tourist trap, The Mystery Shack. "Gravity Falls" is unlike any other place on Earth. Strange anomalies plague the Oregon town and Dipper and Mabel spend the summer piecing together a great and mysterious adventure that ends with nearly tearing the world apart.

Yeah. It gets real.

But I have some questions.
And one observation.

1. What the FREAK was in Smile Dip? (And other convenience store-related questions)

Okay so in the episode "The Inconveniencing," the gang breaks into a "condemned" convenience store and finds everything on the shelves just as it was left when the store closed. Dipper picks up a newspaper covered in dust, wiping it away to reveal the date in the header: May 2, 1995.

The first season of the show originally aired in 2012 which would mean that the store, if the show took place in real time (which creator Alex Hirsch has highly suggested is a fact), would have been closed for 17 years. But when Wendy flicks on the lights, all the machinery and lights start to buzz and work.

That's weird because WHO THE HELL HAS BEEN PAYING FOR THAT ELECTRICITY?! The store has been closed, ("condemned" as they say in the show) FOR NEARLY TWO DECADES. Why would the lights work? Why would the ice in the ice chest thingy still be ice AND NOT MELTED INTO WATER, or, for that matter, EVAPORATED after that amount of time? Why is none of the food moldy? 17 years have passed, that's not nothing.

Some people are going to come back at me with "Oh, but the store is haunted, it's the ghosts!" To which I say: NO. The people who owned the store, we find out, hated teenagers. Why would they make the electricity work or whatever for a bunch of them as they literally destroy the store?

Also, what the hell was in Smile Dip? Because I think it was LSD.

2. How can a mermaid survive in chlorine?

So in "The Deep End," the gang decides to go to the community pool because it's freaking hot and Mabel meets a merman who's been living in the pool called Mermando, because of course. Mermando tells us he's from the Gulf of Mexico, a large body of salt water.

Now, I don't know anything about mermaid anatomy, but one would think that if a mermaid (or merman) lived its entire life in a body of salt water, it would probably die if placed in a pool filled with chlorine and little-kid-pee. Most saltwater fish can't survive outside of salt water and the bacteria-killing power of chlorine isn't going to help either, and Mermando is half-fish so it would stand to reason that he should not have been able to survive in the pool for that long.

Also, there is a kid in "solitary confinement" pool jail (aka, he's in the filter) and he's been there for a long time. During the credits, he's shown there throughout the year. What the hell did he do to deserve that? Aren't his parents worried?

3. Could Stan be the genius?

So in season 2, we find out that Stan is actually a twin who took on his brother's identity when he moved to Gravity Falls. (Side note: who names twin boys Stanford and Stanley? Why would you do that?) Grunkle Stan's twin, Grunkle Ford, was trapped in another dimension for decades as Stan tried to rebuild the machine that put him there. It took him a while, but he figured it out and eventually brought Ford back.

Could you do that? Because I know I sure as sh!t couldn't. The math alone must have been mind-altering. I can't even figure out how to leave a tip by percentage, never mind differential calculus.

The show demonstrates time and time again that Stan is clearly not living up to his full potential, but could he be even smarter than Ford? He is the one who comes up with the plan to defeat Bill Cipher. Things in Gravity Falls seem to come easily to Stan (or so it seems in front of the kids) and I think that's because Stan might be the smartest person there.

4. Gravity Falls takes place in the Rick and Morty-verse

So hear me out on this one, it gets weird, so keep up.

Blendin Blandin pops in and out of the kids' lives from the "future" all the time. His universe is ruled by the Time Baby and the laws are enforced by the Time Paradox Avoidance Enforcement Squad. Anyone who watches "Rick and Morty" will also be able to immediately tell that he is voiced by Justin Roiland, the co-creator of the show.

On "Rick and Morty," Roiland portrays more than a few characters, especially during episodes like "Rixty Minutes," an improvised episode about inter-dimensional cable. Literally anything can happen in Rick and Morty's universe. There are no rules. Even the laws of physics don't necessarily apply.

Considering the things that happen in Gravity Falls and in the episodes where Blendin appears, it makes perfect sense to me that he's met and dealt with Rick Sanchez. I would not be surprised if, at some point in season 4 of "Rick and Morty," we ran into Blendin.

That's all I've got for now. Maybe next time I'll do "Rick and Morty"? Who knows.