Shut up and listen 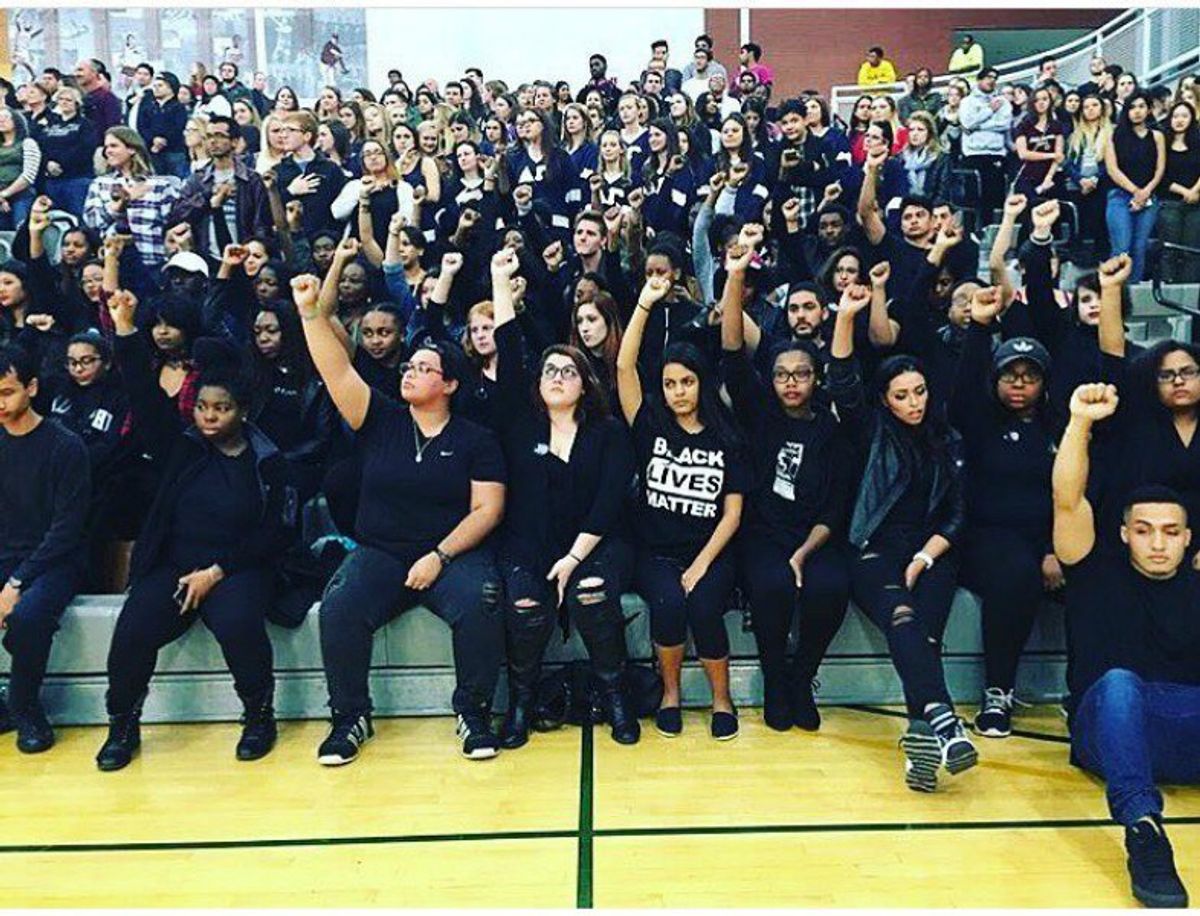 On Friday, October 16th, during the annual Midnight Madness event at Adelphi University, about 40 students and faculty sat during the National Anthem.

The protest, in support of Colin Kaepernick and his kneeling during the national anthem, was against police brutality.

During the time of the protest, there was virtually no reaction. Kindeya Chairo, the Vice President of Black Students United (BSU) pictured in the front with a Black Lives Matter T-Shirt noted in a Facebook post that the greatest reaction in-person immediately following the protest was a few "boo"s.

This peaceful presentation generated a peaceful response, or so we thought.

That night and the following day, a few Adelphi students flocked to social media to respond to the events that happened at Midnight Madness:

With dozens of comments and "likes" on Facebook, it could be assumed that many Adelphi Students support the opposing argument: All lives Matter.

But was this even a Black Lives Matter protest?

Chiaro told me that the protest was against police brutality, yes she's wearing a Black Lives Matter T-shirt, and the two movements share many common threads, however, it is extremely ignorant of onlookers to jump to the conclusion that this is a Black Lives Matter protest when in reality that wasn't even its initial motivator.

There is a lack of communication not only campus-wide, but also within our community. Do you honestly think that all of the student supporters of All Lives Matter and Blue Lives Matter believe in police brutality? I don't.

And what is even more striking to me, is that there was no response during the time of the protest...where was the opposing argument? They weren't in front of their peers who were choosing to sit during the national anthem...

In today's society, we have become accustomed to the comfort of expressing ourselves behind a screen. I'm guilty of it, we're all guilty of it. When you are scrolling through your Facebook, Twitter, or Instagram, you aren't thinking about what you're "liking" for more than 30 seconds.

“What ends up happening, especially on social media… is that certain voices are able to drown out others and we in some cases lose the context of the debate or conversation."

Perhaps that is what's happening here. Those posting about this event on social media are mostly leaders on campus, whether they've chosen to take the Black Lives Matter or All Lives/Blue Lives matter side. However, currently, the argument has grown completely out of proportion to what it initially should've been about, which is police brutality.

With a click of the "like button, however " students and community members can choose a side without even realizing what it is they're "liking." What is more compelling to me however is the difference between the two protests.

The contrast of an in-person protest to an online one can be interpreted to be related to the level of comfort or self-assurance of the protester. In general, it is much easier to speak freely and in person about what you whole-hardheartedly believe in and are educated on. Think about public speaking. When you're giving a presentation about something you're interested in, or genuinely believe in, your body language shows it. Your eyes flicker, you seem more relaxed, and your voice carries the room. When you're speaking about something that you're unsure of, or can't defend, you produce a different reaction.

There is a certain level of comfort required in what you are defending in order to protest in person and I'm not sure if it's necessarily needed online.

Currently there is great tension in our country. Americans everywhere are frustrated with our presidential candidates, economy, the threat of ISIS and other terrorist groups, racial tensions and inequality, gender inequality and many other social and economic issues.

But social media doesn't have to be the catalyst to our growing communal divide. In other countries around the world, particularly during the Arab Spring in the middle east, citizens, many of which were college students, brought about real change and overthrew governments in Tunisia, Egypt, Libya and Yemen, with not only social media but more importantly with unification.

Expressing yourself in 150 characters or less allows you to simplify your beliefs, your creed, into oversimplified characters and numbers which is ultimately a disservice to your own thoughts and human being because you were not given a brain or cognition or a heart to think this way.

“In a country that's divided culturally, tools like this [social media] are amplifying the two parties or two sides" notes Drew, "Whether its Trump versus Hillary, Black Lives Matter versus Blue Lives Matter, we're reducing our conversation to this back and forth emotional dialogue.”

If you are witnessing a protest like the one that happened at Midnight Madness and you disagree with it, SAY SOMETHING. Look that protester or group of protesters in the eye and ask: why do you feel this way? Listen to their responses. Absorb their words and listen to their ideologies and take a moment to reflect and compare them to your own. Chances are you will have more in common than different.

We are growing tired not only as a university but as a country. The only way to generate real change is with unification, and the only way to become unified is to get offline, look each other in the eyes, open up our ears and LISTEN.