The dubious dealings of Presidents Nixon, Reagan, and Clinton. 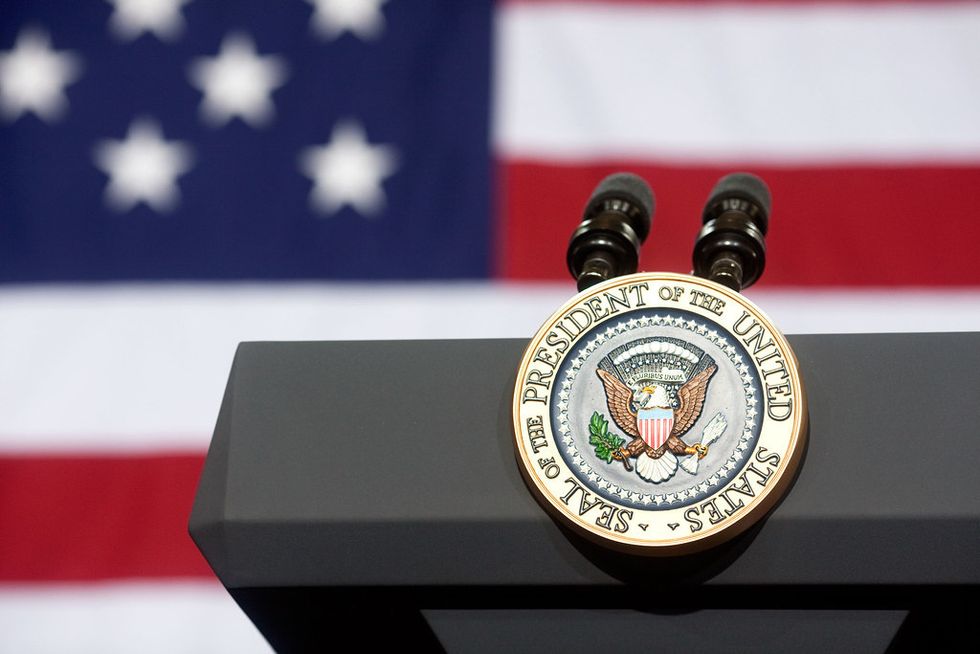 Surprise! All our presidents are liars! Maybe that isn't exactly shocking, after all, politicians aren't known for their candor, but at times, the level of scandal reached by our executive is truly baffling. Our current commander-in-chief might be exceptional in both the frequency and vociferousness of his untruths, but let's take a look at some semi-recent examples of presidential indiscretion for comparison.

I think we all know this one. President Richard M. Nixon attempted to edge out his Democratic opposition in the 1972 election by commissioning some hapless cronies, known as the plumbers, to break into the offices of the Democratic National Committee and install a recording device ostensibly to monitor campaign strategy. Their super spy mission, which occurred at the Watergate Hotel, was uncovered by a security guard, and the burglars were promptly arrested. Yet, of course, Nixon denied any involvement in the crime, easily won the election in November and, were it not for the investigative journalism of Bob Woodward and Carl Bernstein, may have evaded the FBI's ever-watchful eyes. In the end, the investigation blew wide open, impeachment was forthcoming, and Nixon resigned in disgrace. What a goof. Today, simply attach the -gate suffix to any activity and you have a scandal-in-the-making. So, thanks, Tricky Dick. You may have bombed Cambodia, but at least you left us some slang.

First, I think this requires a little background. The Contras were a right-wing, paramilitary political organization in Nicaragua opposing the Sandinistas, the socialist regime in power. They weren't exactly the good guys, rife with corruption and questionable, violent tactics, but it was Reagan, and it was the Cold War. If you slapped socialism onto anything, you'd get that leathery man riling up the Boomers like there's no tomorrow (sound familiar). So naturally, Reagan supported the Contras, but alas, those pesky legislators in Congress had banned material support to their cause. Meanwhile, on the other side of the world, several Americans had been taken hostage by the Iranian government (who had some deep-seated hatred of the ol' U.S. of A. after we helped depose their prime minister and install a vehemently unpopular, puppet monarch in his place). Do you see the connection yet? Probably not. Somehow, the president and some of his top advisors found it agreeable to sell missiles to Iran, which was also forbidden, in exchange for three of the hostages and, in a gloriously ridiculous twist, send some of the money over to the Contras! Fantastic diplomacy. Truly top notch presidenting. Reagan denied any knowledge of the proceedings, but over the course of its investigation, the Senate uncovered a web of government-sanctioned private businesses and offshore accounts, collectively known as "The Enterprise," that facilitated the transaction with Iran and the funneling of cash, weapons, and other supplies to Nicaragua. Turns out the Contras also sent drugs back to the U.S. using the same planes with which we gave them aid (just say no, kids!). Several of the president's men were indicted, including Colonel Oliver North, who infamously languished under fire during Congressional hearings. Nevertheless, Reagan left office pretty much untainted. But hey, a little capitalistic, anti-communism never hurt anyone, right? I wouldn't ask any Nicaraguans.

Again, we've all heard of it. We all love to joke about it. After denials from both parties that a sexual relationship ever occurred between them, things started to unravel. Kenneth Starr, a special prosecutor tasked with investigating a prior real estate scandal involving the Clintons in Arkansas, received evidence that Lewinsky had lied in an affidavit denying the mythical affair. A wiretap on Ms. Lewinsky further proved suspicions, but as public interest skyrocketed, Mrs. Clinton stood by the president's side as he uttered perhaps the most famous untruth of his two terms in office, "I did not have sexual relations with that woman." I know you read it with the twang. After agreeing to testify before a grand jury in the summer of '98, President Clinton finally admitted to his "personal failure," assumed responsibility for his actions and awaited the fallout. Starr published a report of his findings and, like Nixon, articles of impeachment were drafted by the House according to the prosecutor's recommendations. Yet Clinton was acquitted of perjury and obstruction charges in his 1999 Senate trial. Like a dried stain on an intern's dress, the scandal still mars his presidency to this day.

Jokes aside, I watched an interview with Ms. Lewinsky recently on John Oliver's show "Last Week Tonight," in which she discusses the backlash she faced from the media uproar surrounding the events of 98-99. She now retains an admirable sense of humor about the fiasco, but it took her years to rehab her self-esteem. She struggled to find work, her family faced second-hand criticism, and her life was deeply, and irreparably affected by that single mistake. If we were all endlessly judged by our youthful blunders, we'd all be damaged. In that regard, I think she deserves some leeway here, as the president should inherit just as much, if not more of the blame. While this scandal differs from the others in that it didn't involve outright crimes and really could've been settled without as much public scrutiny, President Clinton still abused his power, lied to his electorate, and emerged pretty much scot-free.

Part 2 will be coming soon because the presidents of the 21st century have been just as naughty as their predecessors. Yes, that includes Obama.