Poem About Touching The Sky 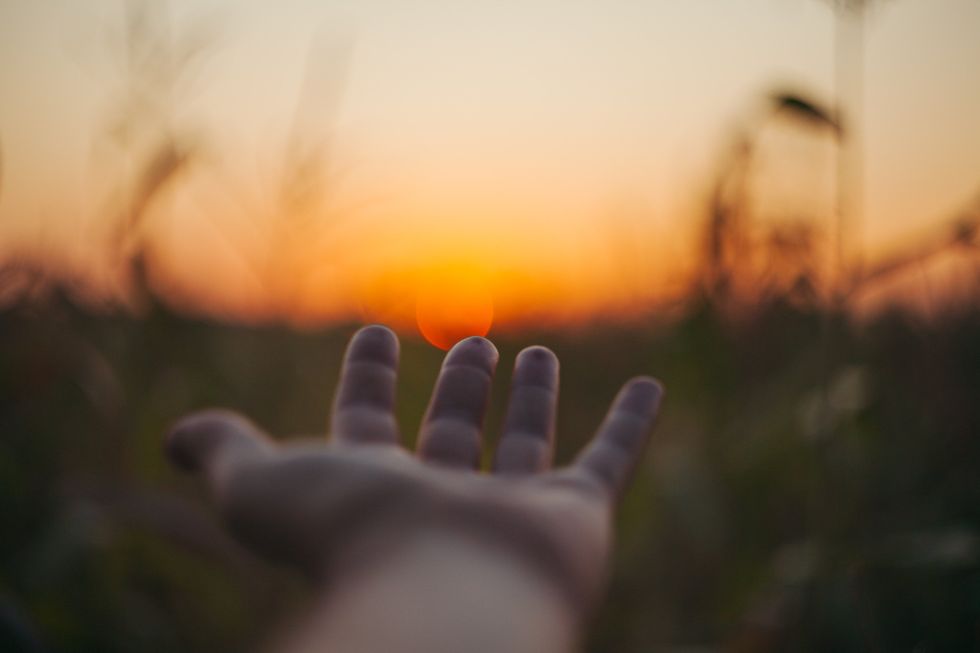 I must admit it didn't feel like I thought it would.

It was thin, like silk, so much so that I could just push a little bit

and it would give way to blackness and infinity.

It felt like thorns and feathers, crimson and azure, Sriracha and gelato.

And I've found that parallels really do define the sky.

Things that seem so disparate but are really so similar

So close, yet so far

So deep, yet so flat

So pervasive, yet so indefinite

And then, do you know what happened?

The sky told me a story

When humans placed wings on their backs in 1903, do you know what the sky did?

The sky mocked us.

Ha, it chuckled, you think you can touch me now.

But you can never.

And, I realized, it was true

No matter if we take the fastest plane in the world and soar as high as possible, we can't touch the sky

And no matter if we take the fastest rocket in the world and soar beyond the atmosphere, we still can't touch the sky

There's nothing palpable about the sky

It's a figment of our imagination

They say we should reach for the sky

I won't try to touch the sky again

But, just to tease the sky, I'll touch the highest thing I can

Even if it's not cerulean and silky

And then I turned back to the sky

Well, I smirked, even if I can't touch you,

I still know your secret.

The sky narrowed its eyes: Don't tell a soul.

So how will he know if I tell his little secret?

poem
Report this Content
This article has not been reviewed by Odyssey HQ and solely reflects the ideas and opinions of the creator.

My Family Went Through COVID-19, And Now I’m Watching My Class Go Through it Too

My story, my reality, my advice.

It was a day we all knew would possibly come but hoped it never would. The day the outbreak hit.

I remember, back in March, I was just about to return home from a socially distanced vacation in my Florida home with my mom and grandpa, when my dad called to tell us he was feeling sick. At the time, President Trump hadn't closed the borders, my school was still going back after Easter, and sheer panic hadn't yet flooded our news outlets. We were meant to return home on Saturday, but when the borders closed on Thursday, things got a little more serious.

21 Romance Novels You'll Fall In Love With By The Fire

It's time to cozy up and fantasize about our fav fictional love stories.

Recently, I found myself reading a bunch of romance novels and it's truly unleashing the romantic side of me. With fall weather nearing, it's the perfect time to cozy up with a good book and ignite the romantic flame in your hearts with the turn of every page.

Here are 21 romantic books you should read this fall, some I've read (hence the reviews), and some I'm hoping to get my hands on.

8 Tips For Positive Mental Health, Because The World Is Hectic Right Now And We All Need Some Help

Your mind deserves some love.

There is a lot going on in the world right now, much of which is contributing to the mental health crisis we've found ourselves in. While it would be fantastic to snap our fingers and jump out of our rut, that's not exactly how these things work. Thankfully, small, sustainable steps can make a huge difference in your mental wellbeing.

There is never a bad time to get some new oversized graphic tees, especially when they're all under $30.

While we all love Urban Outfitters' graphic tees, it can be hard to justify a $40 T-shirt, so I am always on the hunt to find cheaper alternatives that are just as stylish! Thrifting is always an option for authentic, vintage tees, but we don't always have the time to search through the endless aisles of Goodwill.

Lucky for you, there are still affordable alternatives that don't require quite as much effort.

Spoiler: this list contains no mention of Carole Baskin.

On Monday, "Dancing with the Stars" returned to our televisions with their 29th season. This season featured a lot of different changes including a new host, a new judge as well as a new judging system.

Among these changes, there were also changes to account for the coronavirus pandemic. Some of these changes included practicing socially distancing as well as different filming practices.