Why A Philosophy Degree Isn't A Waste
Odyssey
CurrentlySwoonLifestyleHealth & WellnessStudent LifeContent InspirationEntertainmentPolitics and ActivismSportsAdulting
About usAdvertiseTermsPrivacyDMCAContact us
® 2023 ODYSSEY
Welcome back
Sign in to comment to your favorite stories, participate in your community and interact with your friends
or
LOG IN WITH FACEBOOK
No account? Create one
Start writing a post
Politics and Activism

Why A Philosophy Degree Isn't A Waste

Challenging the stigma and answering the question: "What are you going to do with that degree?" 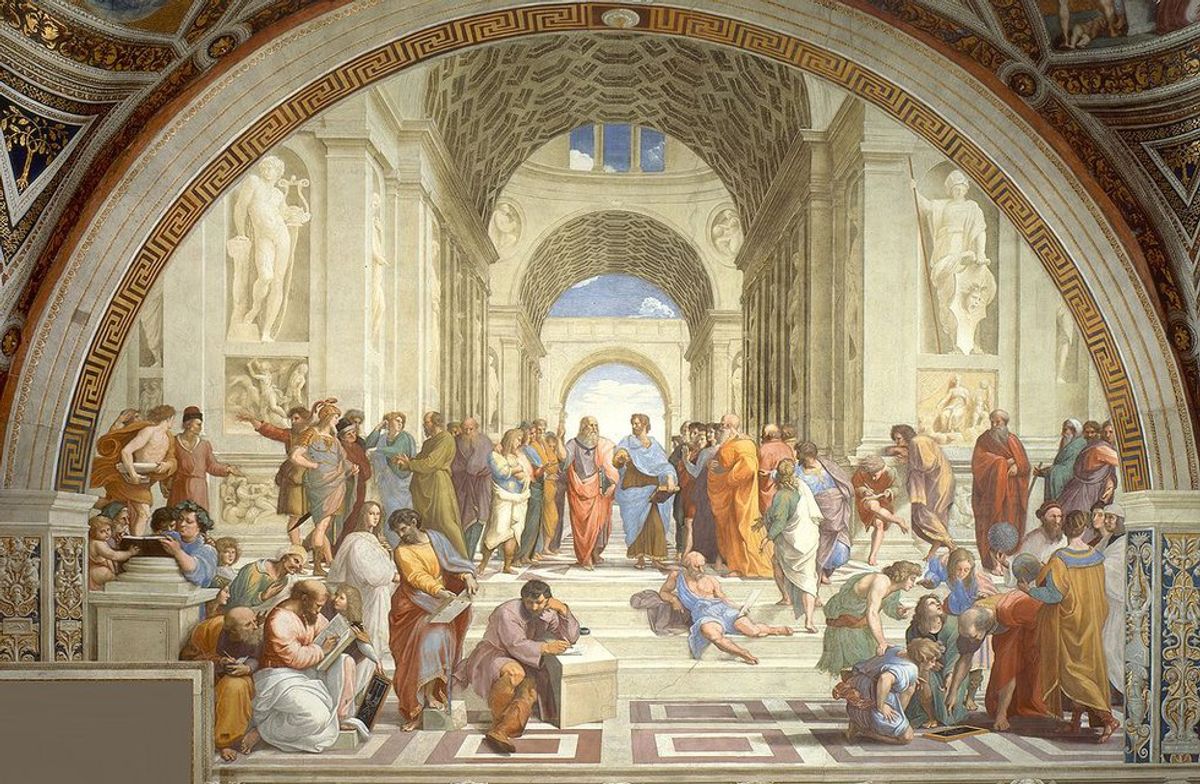 I did not start my undergraduate career as a philosophy major.

Most students, like myself, take a philosophy class for a Gen Ed or because it sounds interesting and fall in love. There is a lot to love about the major: it is the intersection of history, science, politics and is more introspective than most disciplines. It familiarizes its students with great names that have shaped civilization as we know it. The picture shown above is Renaissance artist's Raphael's famous "School of Athens." The central figures are Socrates (left) and Plato (right), both invoking two "schools" of philosophy with hand gestures: Socrates was concerned with the workings of the heavens while Plato was concerned with the workings on Earth. The historical reverence for these philosophers nearly 1500 years after they lived is significant and emphasizes the importance of philosophy to human civilization. After two millennia philosophy, the love of wisdom, is still the foundation of learning.

Despite my passion for my major, I was tentative to pursue a degree in philosophy. I realize now that there is a stigma against the major, and I almost believed all the misconceptions about success after college with a philosophy degree. I believed that philosophy majors only go on to be college professors, a career path I truly had no interest in pursuing. I was wrong, and I am realizing that so many people still believe and peddle the same misconceptions that almost stopped me from being me.

I want to do my part in chipping away at the stigma by offering evidence that a philosophy degree is neither a waste of time nor money. A philosophy degree is often tossed into the collection of most useless college majors. According to its critics, philosophy classes teach no skill, no trade, and therefore employment potential is next to zero after graduation. In a learning environment and job market that strongly favors STEM related education, philosophy is criticized for only teaching students to think. The stigma lies in a belief that, in world with skyrocketing tuition and student debt, a degree in philosophy is fiscally irresponsible.

There is also a belief that other types of education are intrinsically more valuable. If a student majors in biology, it is not a stretch to ask if he or she plans to pursue a career in medicine. The same could be said about a person undergoing training to become a mechanic or a welder--there is a tangible connection between career path and education. The mainstream line about philosophers was demonstrated by Senator Marco Rubio (FL-R) in November 2015 when he said:

While vocational education should not be stigmatized, neither should an education in philosophy. Philosophy is one of mankind's oldest disciplines. It explores ancient questions that, to this day, only have ambiguous answers: What is justice? What is morality? What is the nature of God? What is the nature of the soul? These are discussions that human being have had for thousands of years. Just because these questions may never be answered does not mean they are not worth discussing.

However, since seemingly every person I've met has asked me "What are you going to do with that [philosophy degree]?" Majoring in philosophy offers a variety of paths to success. The reading, writing, a critical thinking skills that come with a hard-earned degree in philosophy can propel students into graduate school with unparalleled preparedness. For instance, philosophy majors statistically score higher than most other college majors on their Law School Admissions Test (LSAT). The LSAT is the most important factor law schools consider for admission, and therefore a high LSAT score is quintessential for success. A survey of students who took the LSAT from 2007-2008 found that philosophy majors scored higher than any other major with an average score of 157.4 (out of 180).

Liberal arts degrees are putting some graduates on the fast-track to high paying tech jobs, and philosophy majors have been specifically identified as valuable additions to the tech industry. The fine-tuned ability to think intensely has become valuable to multimillion software startup Slack Technologies, who is trying to develop a knowledge management software. This project, which has been in the works for 15 years, is so cumbersome that "hardcore" engineers can't wait to quit. Slack's CEO and cofounder, Stewart Butterfield, is worth over $300 million and also happens to have a degree in philosophy.

The opportunities go on. Philosophy majors are not pigeonholed into a future without success or professional growth. The ability to read deeply and generate new ideas, to find solutions to tough problems, and to write and speak clearly are easily the most transferable skills that philosophy majors are guaranteed to learn. It is, of course, not simply the degree that will assure the success of any student with any major. Students must continue to think, to learn, a strive for greatness in order to be great. It just so happens that philosophy majors are really good at thinking.