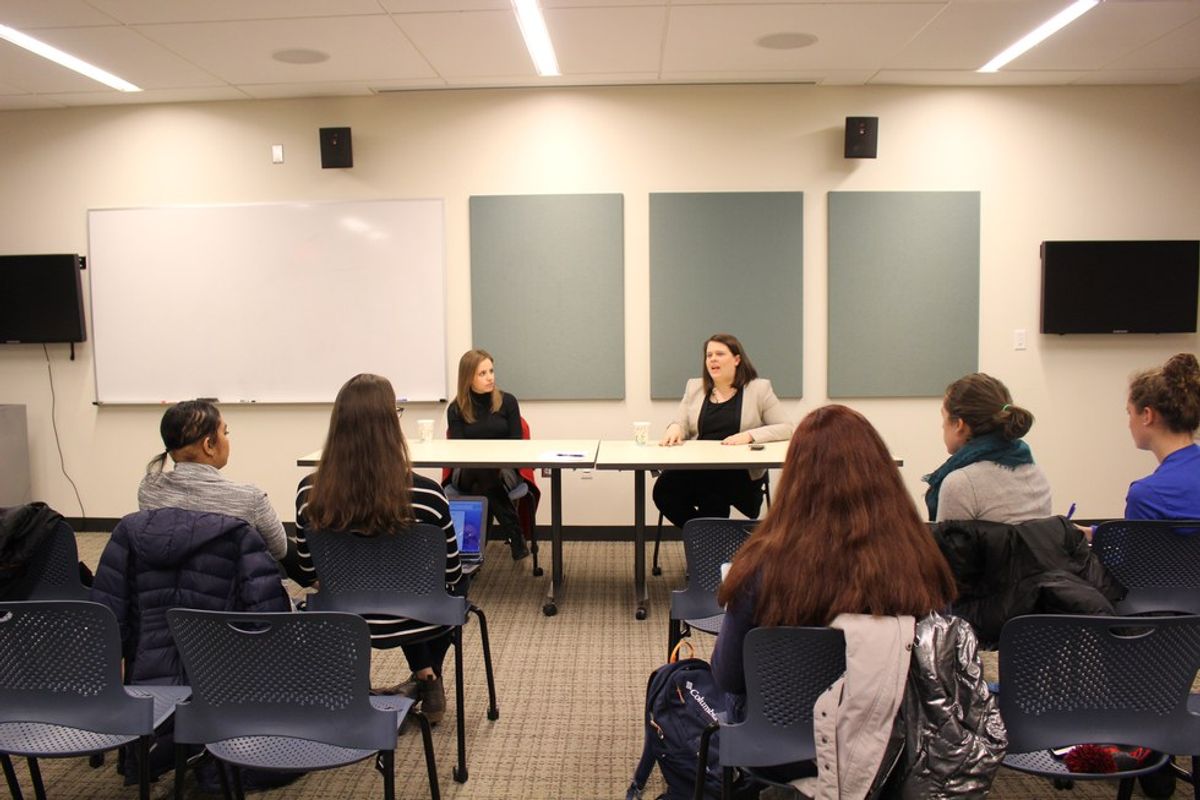 In a small but rapidly growing corner of the Mayor’s Office, Megan Costello and MaryRose Mazzola work closely to bring Boston to the forefront of the gender equality movement—and they have.

Thursday, March 23, Costello and Mazzola came to Boston University to mediate a student town hall on women’s advancement and gender equality, hosted by BU’s Diversity in Law Association. The DLA invited the two leaders of the mayor’s Office of Women’s Advancement and the Boston Women’s Workforce Council to discuss women's issues in the professional world, particularly the wage gap in the greater Boston area.

Unfortunately, Boston’s approach to eliminating the wage gap and issues in gender representation is unique to Boston. No other city in the country has taken data-driven steps to actively seek out a solution to this issue by combining both public and private sector efforts. The Office of Women’s Advancement works to meet these goals with a three-pronged approach.

The first prong is legislation, a crucial step in protecting vulnerable and underrepresented populations. Most recently, Massachusetts passed the equal pay bill (one of only four states to do so), which will ensure that employers can no longer ask for salary history. Because women are currently paid less than men, by reporting a lower salary history for the same job as a male candidate, a female candidate usually ends up receiving a lower salary. The hope is that this bill will help eliminate the gap by getting rid of regulations that amplify this pattern.

The next part of this approach is the Boston Women’s Workforce Council. This Council operates under the assumption that employers have a role to play in equal pay; it is not solely the responsibility of the government or individual women. The Council works with employers, anonymously collecting data from signers, to examine the wage gap problem and to also see where gender inequality may manifest itself in a company's organizational structure. The data can show predominantly where women are in an organization, retention rates, and prevalence in managerial or leadership positions.

The Women’s Workforce Council works with employers by holding them accountable to a 100% Talent Compact. This agreement facilitates research revealing internal representation and wage gaps, ensures employer anonymity and provides employers with concrete opportunities and ways to implement solutions. Currently, this initiative has around 200 signers, each committed to the mission of promoting gender equality. The Council also holds quarterly Best Practice Conferences where representatives from these employers gather to discuss their strategies and walk away with action plans to set into motion. This interactive, transparent partnership establishes a long-missing sense of trust between the government and business that will be essential for promoting equality, both now and in the coming decades.

The third prong is free salary workshop classes for women in the Boston area. While the responsibility should not solely rest on individuals, these workshops give women the tools they need to negotiate fair salaries. Furthermore, these classes teach women how to negotiate like women. People generally think about negotiation embodying male qualities, and many women endure social and professional backlash if they negotiate the same way men do, even if they are successful. These classes teach women how to use their personal strengths to their benefit in hopes that they can overcome these social stigmas.

From the current data gathered by this initiative, much of the previous literature and public conception regarding the wage gap has been confirmed. In fact, the wage gap for the greater Boston area is slightly larger than what was previously thought according to current analyses, with women making 23 cents less to the dollar of their male peers. This also only reflects reports from participating companies, employers with an interest in minimizing this gap, implying that in reality, this gap is probably larger.

The significance of this project is how progressive Boston appears ideologically, but also how much work still needs to be done in this supposedly progressive and liberal city. Many are surprised that there is such a significant wage gap in the area; as Mazzola phrases it, it doesn't jive with people's expectations. That's where the major backlash for this initiative comes into play. But what is positive is that Mayor Walsh does in fact practice what he preaches and is leading this city toward gender equality. Just as crucial are the business leaders in Boston, "socially oriented and progressively minded," willing to join forces with the government and lead by example. These already effective initiatives are incredible markers of Costello's and Mazzola's successes, as well as the success of our city.

Megan Costello, the Executive Director of The Office of Women’s Advancement started the conversation with a bit of personal background. She began her professional life by working in Newton, MA for the mayor and then spent eight months in Iowa working on Obama’s reelection campaign. She also campaigned for Sen. Ed Markey D-MA and currently works for Boston Mayor Marty Walsh. A crucial motivator behind her work is the values of Walsh, both personally and politically. Coming from a working class family, in Costello’s words, he as a lot of personal perspective gained from real-world problems like cancer, gun violence and alcoholism. His political style is both hands-on and humble, spurred on by the question, “How do we get to yes?”. After his campaign for Mayor, Walsh invited Costello to stay in his office and look into what Boston was doing for women and girls. The shocking lack of findings here drove Costello to stay in Boston and build up the city to its progressive ideal.

MaryRose Mazzola began her career in politics with a state senate campaign and proceeded to work for the senator once he had entered the office. She then became his political director for a statewide run. After her stint in the state house, Mazzola went on to graduate school for a Master’s in Public Policy at Harvard's Kenedy School, with a focus on data analysis and women’s issues. After graduating, Mazzola joined Costello in the Office of Women’s Advancement, but then returned to the campaigning to help Michelle Wu win her seat as the city council president. After that last campaign, Mazzola began her work for the Boston Women’s Workforce Council and has since been working tirelessly to bring the Council's goals to fruition.