Why Bird Box Is A Bad Movie
Odyssey

The appearance of monsters, the survivor's bungalow, a worldwide state of panic... how more cliché can you be? 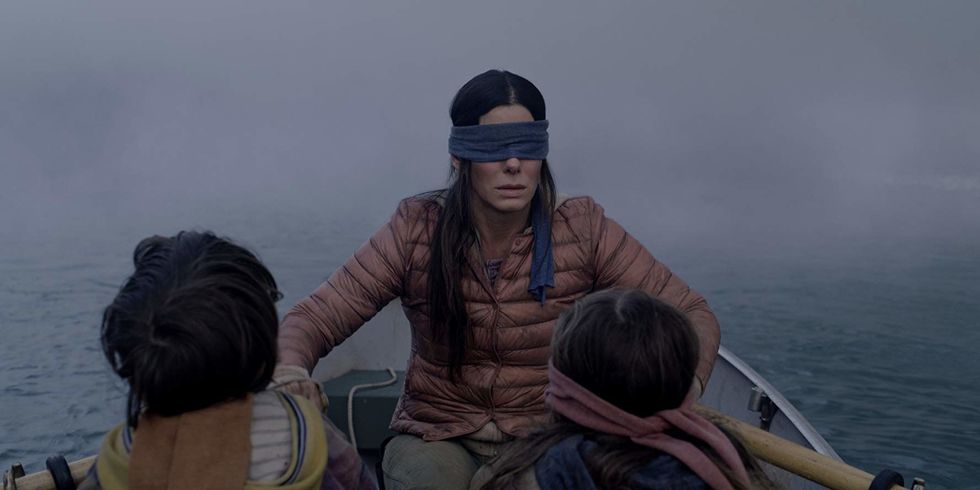 Warning: this article contains spoilers about Netflix's newest release "Bird Box" and touches on the topic of suicide.

After Netflix released its newest thriller "Bird Box," it seemed like the entire world went into a frenzy: going to Twitter to post reaction memes, starting new challenges (of which YouTube recently banned), and most of all, spreading its cinematic praise all over the internet — hooking in more viewers and continuing the cycle once again.

To put its magnitude into perspective as it had broke office records, Netflix released a movie's viewership data for the first time and published that Bird Box had racked up a whopping 45 million views, 11 million being on just the first weekend of its release, and one being myself.

Like it was yesterday, I remember walking into class and wondering to myself what I had set for the day: a project to turn in, maybe a quiz, when I overheard parts of another conversation, picking out a few words from it: "blindfold," "Sandra Bullock," "he looked!" Confused, my day continued with everyone obsessing over its release and being bombarded with the question, "Have you watched it yet?" So when I finally did go home, I logged in out of curiosity and watched it for myself.

But even after its hour and a half plot, I'm still confused why it has become such a craze. Outside of its bias factors such as the appearance of famed actors Sandra Bullock and Trevante Rhodes — the story line itself was bland and easily guessable: in a world where it is deadly to see, of course the blind would be at an advantage.

In all, there were so many plot holes (such as, what happened to Felix and Lucy after they took the car? What happens if they run out of gas? Do all birds warn of the monsters? What sound would a flamingo make?) that it was hard to grasp the full story behind the chaos that ensued from the appearance of the monsters who (ironically) made no appearance in the movie.

SEE ALSO: 10 Important Questions Me, An Intellectual, Had After Watching 'Bird Box'

A mere flutter of leaves was all that was given in preparation for their arrival, of which led the entire world into committing suicide minus the most mentally ill — a major branch of the story-line that would be touched on in only three scenes. As I watched it, I felt as if I had almost seen it already. After the full blown chaos scene with the death of Malorie's sister, played by Sarah Paulson, the movie seemed to only go down from there.

Sure, there were brief instances of good implications of a plot twist (RIP Charlie), but for the most part, the plot of "the monsters are coming! What do we do?" *makes an immediate plan, and plan works out* had been replayed and replayed, with an immense amount of foreshadowing Olympia's death and Malorie and Tom's eventual relationship.

The survivors were a massive cliche in itself, highly diverse in every aspect (which is probably unlikely if it truly was a state of emergency) with the common personality tropes: the pessimistic realist, the optimist, the cowardly, the strong female, the weak female, elderly figure and strong (with probably some sort of military background) male leader.

From simply having this, the entire movie worked itself out. It was on the easier side to foreshadow: for example, opening the door to outside strangers seems like a terrible decision both to the actors in the storyline and those watching, however, nothing bad happens until its a minority of the characters who decide to open the door. Along with this, anyone who singled themselves out within the first couple of minutes would die eventually (Greg by watching the video recording, Charlie by refusing to go to the market, Douglas from his attitude and being locked in the garage, etc).

It was Tom and Malorie who was the peacekeepers and innovators when trying to keep the house and everyone within it at bay, thus, the only survivors after the first half of the movie.

From the snapshots back and forth between Malorie and Tom's relationship to Malorie's struggle on the river, it was clear to me that Tom would eventually die, too: again, a great plot twist when Tom had decided to take his mask off and save Malorie, but predictable that he'd fall victim to the monsters. It was only those few placed plot twists that had me excited to see what's next, other than that, I felt "Bird Box" followed the same dystopian-apocalyptic plot we've been all too familiar with.

It seemed as if Netflix had been advertising the movie not off the plot itself but rather its chosen actors. Having big A-list celebrities all set within one movie had allowed watchers to be drawn into the movie, even if they weren't drawn into the movie itself. A strategic marketing strategy, almost clickbait, when users open their Netflix account and see a giant image of Sandra Bullock holding two (adorable) children, along with pop-ups by Trevante Rhodes, the hilarous John Malkovich and recent "Dumplin'" star Danielle Macdonald.

This isn't the first time Netflix had used the fame of its actors to boost a movie's marketing either: think Debby Ryan in "Insatiable," Joey King in "The Kissing Booth" and Noah Centineo in "To All The Boys I've Loved Before."

Overall, an okay movie, entertaining but lacking in depth, "Bird Box" is a well-coordinated movie whose downfall was simply in its writing. The acting was phenomenal and many great cinematic shots were captured in its filming, but so, so much more could've been done.

bird box
Report this Content
This article has not been reviewed by Odyssey HQ and solely reflects the ideas and opinions of the creator.