18 of my favorite All Time Low songs 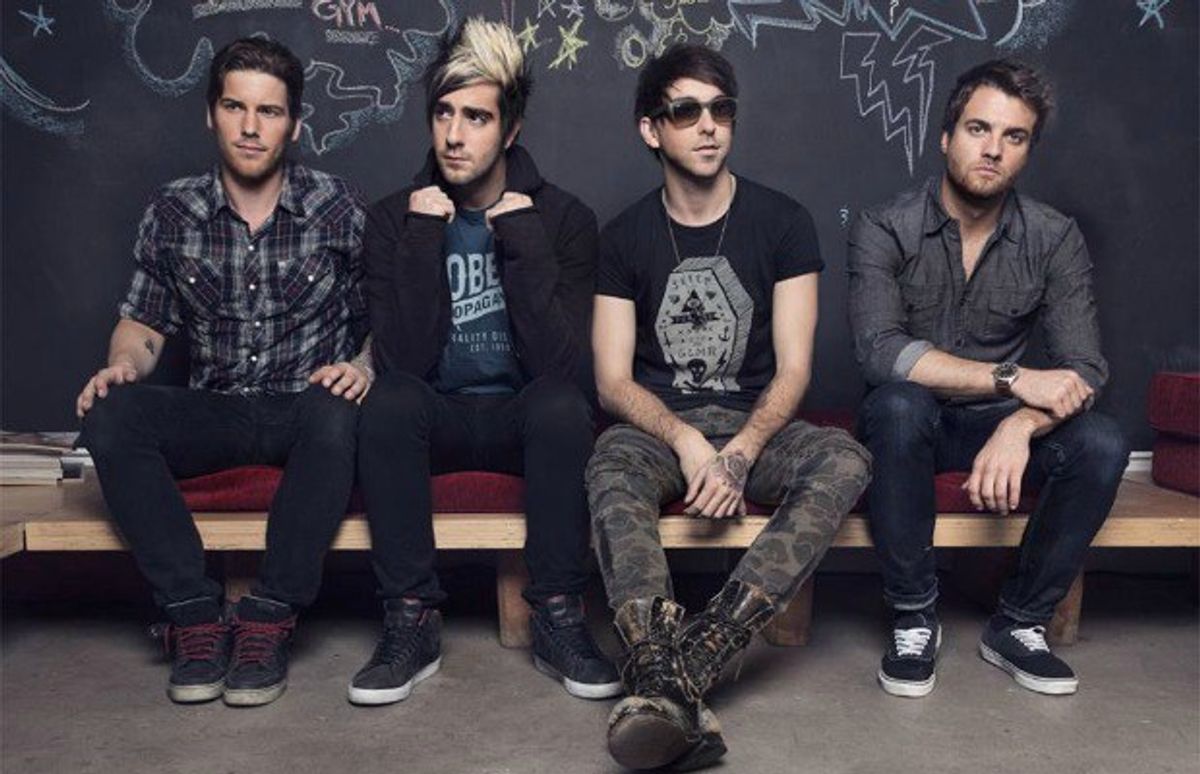 The Alternative Press Music Awards is coming up in just a few weeks, and who better to host for the second year in a row than All Time Low's own Jack Barakat and Alex Gaskarth?! In honor of their hosting, I compiled a list of my top 18 favorite All Time Low songs. Enjoy!

This song is fun to listen to because of the beat and everything. The lyrics note that maybe the singer is losing himself a bit in alcohol, caused by a breakup and that maybe he was just trying to please her, now realizing that he doesn't have anyone to please anymore.

This is a cover of Rihanna's song that All Time Low did for the 2008 record,
Punk Goes Crunk." It's one of my favorite covers of all time, and it's upbeat and catchy, which makes for a great dance song.

One of the slower tracks on the lists, "Therapy" is such a great song. I love the tone of it, and it's the first track of ATL's that I actually learned how to play on guitar because I loved it that much.

The song is about falling for someone, but not being able to be with them. Alex Gaskarth himself says that the song is a culmination of both old All Time Low and new All Time Low, and it features guest vocals from Cassadee Pope.

This track was the first single off of All Time Low's third record, "Nothing Personal," and is about not wanting to grow up. It gives off this whole mentality that you're stuck in a negative space and you just want to get out. My favorite lyrics from the song is from the chorus: "Maybe it's not my weekend, but it's gonna be my year."

This song was inspired by Jazz legend Ella Fitzgerald, and is Alex Gaskarth's attempt at expanding on the ideas presented in her version of the standard "It's Only A Paper Moon." With this song, Alex is attempting to showcase his more eclectic music taste.

You ever get in a relationship where even your best friends don't agree with it, yet you want to do what you want to do? Yeah. That's basically how this goes.

This is the first single from ATL's fourth studio album "Dirty Work." It was co-written with Weezer's Rivers Cuomo. Alex Gaskarth said this song had the silliest lyrics he's ever written because it's an intentional and sarcastic jab at the current state of radio.

"I'm gonna break your little heart, watch you take the fall, laughing all the way to the hospital..." So basically this song is about a breakup, but a breakup that's long overdue. The singer doesn't seem torn up about the breakup even in the slightest.

This song is about spotting a beautiful girl at a show and wanting to meet her. However, she doesn't pay any attention to him as she's so involved with the music and is just there to have fun and dance. (Hey! Alex wrote a song about me! Haha!)

Fun fact: the song was originally written by Simple Plan. That's right! This song was originally penned by Pierre Bouvier and Chuck Comeau of Simple Plan, but they deemed it more of an "All Time Low" song and allowed ATL to have it. In return, Alex Gaskarth did some guest-vocals for Simple Plan on their track "Freaking Me Out." It pays to have friends in the industry.

The amazing vocals of Alex Gaskarth is showcased really well on this track as well as the amazing stylings of the newly wedded Juliet Simms Biersack. Their voices compliment each other well, and need I have to say how heartbreakingly beautiful this song is?

6. "The Irony of Choking on a Lifesaver"

Two summers ago, this was the song I was listening to on repeat. My ex was basically playing games with me: one minute he wants to talk and be friends, the next he's completely ignoring me. The first few words of this song completely spoke to whatever I was thinking at the time, and it stuck for me. I mean, what part of "stop f------ around with my emotions" doesn't speak volumes?

"We're all part of the same sick little games, and I need to get away, get away." I love the melody of this song. It's upbeat and catchy, and I find myself singing it almost all the time. Like, 80 percent of the time, it's in my head.

This song features another of my favorite vocalists: Vic Fuentes from Pierce The Veil. The song took home Song of the Year at the very first Alt Press Music Awards two years ago, and rightfully so. Like most of ATL's stuff, it's such a fun song to jam to.

Ah. One of the coolest, yet most disgusting music videos I've ever watched. I love this song so much, and the music video makes me laugh as well as having me slightly queasy. It's like Alex is a zombie, but he doesn't know it, and the girl he's trying to chase because he likes her is running away because he's a zombie. He's, like, eating everyone in the band. It's so great.

Of course, this song is at number one. It makes total sense. I mean, come on! It's classic All Time Low! The song just went Platinum in 2015 for reaching 1,000,000 units consumed (meaning 1 million downloads).

If you love ATL as much as I do, don't forget to check out the Alternative Press Music Awards on July 18, live on amazon.com/APMAs at 7 p.m., and catch Jack and Alex hosting!

Emmaline B
The Narrative
26106
https://unsplash.com/photos/O0T1SIgHAfM