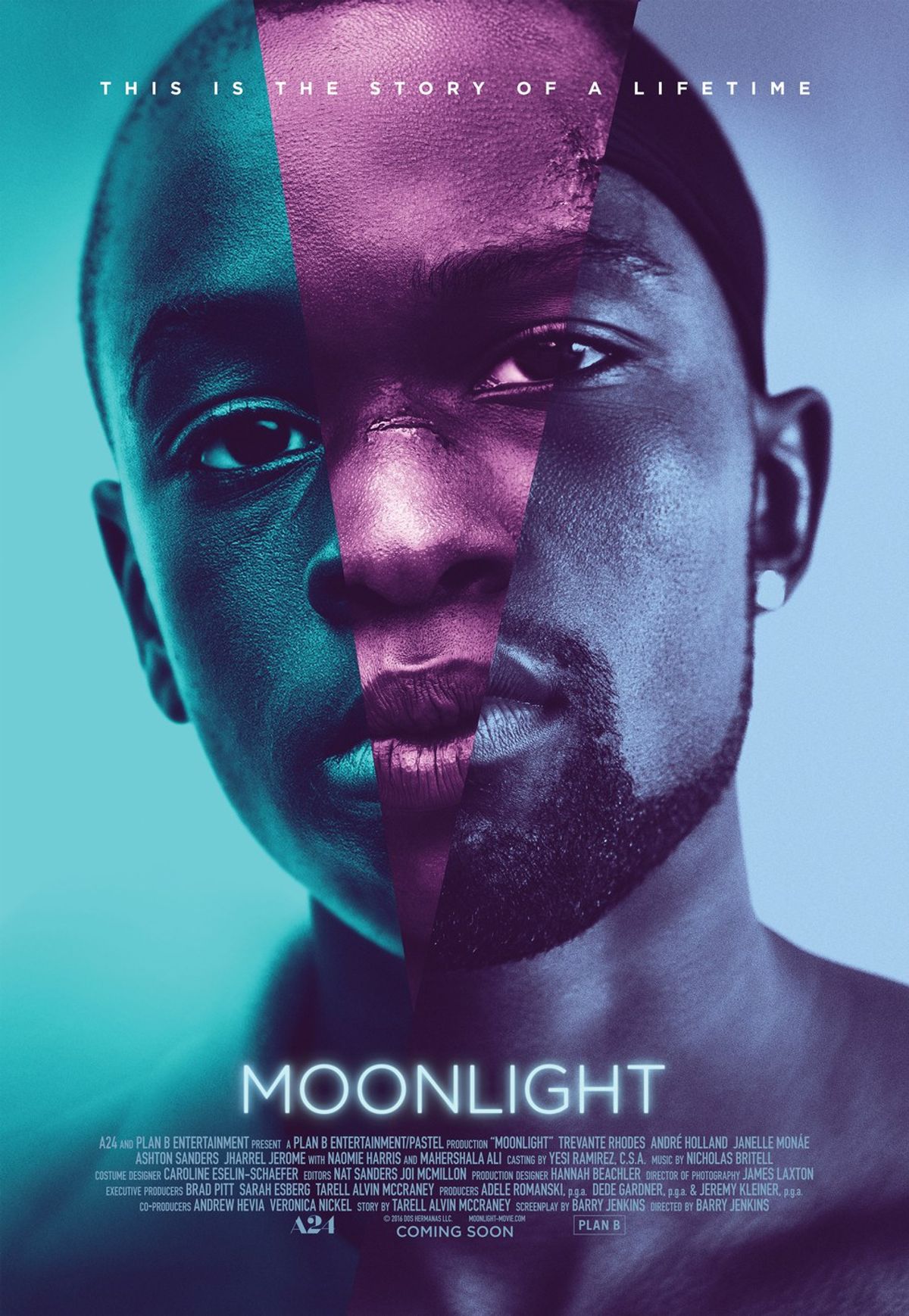 Written and directed by Barry Jenkins

4 stars (out of 4) (film review by Francisco Olivera)

It always happens… Every time I finish what I realize is a new masterpiece of a film, I feel a little cheated. I think, ‘Wait… that’s it? No more?’ And then it hits me: I didn’t want this film to end! These characters had me intrigued, and I genuinely cared for them.

Moonlight, written and directed by Barry Jenkins, is a new classic, pure and simple. It deserves to be ranked alongside recent masterpieces such as 12 Years a Slave, Boyhood, and There Will Be Blood. But before I give any more praise, let me explain the story as best as I can (some elements I must keep secret since they may be considered spoilers). The film centers on the life of Chiron, divided into three parts: first as a young child (played by Alex Hibbert), second as a teenager (played by Ashton sanders), and finally as a young man (played by Trevante Rhodes).

In the first segment, we begin by seeing Chiron as a shy kid harassed by bullies who call him “Little”. They call him “faggot”, a word he doesn’t even know what means. After escaping from some bullies, he is found and taken care of by Juan (Mahershala Ali), a crack dealer who lives in a nice house with his girlfriend, Teresa (Janelle Monáe). They both begin taking care of him from time to time since living with his mother, Paula (Naomie Harris), is a living hell. Paula is caught in the ugly grip of crack, abusing and controlling Chiron as she pleases, despite really caring for him when she’s not high. Chiron’s only friend of same age, who doesn’t kick him down, is Kevin, (Jaden Piner, a role in which three different actors play the character as well throughout the film).

In the second segment, Chiron is now a teenager but things are still the same. Paula is still smoking crack and Chiron is still bullied at school. His insecurities of self-identity and sexuality are still a vast enigma to him. The only positive moments in his life come from Teresa and Kevin (Juan is gone; although it is never explained why one can assume what may have happened from drug dealing). Kevin is still surprisingly friendly to Chiron, at least when he’s not hanging with the same gangbangers that bully Chiron. In the final segment, adult Chiron (now played by Trevante Rhodes) lives as a drug dealer in Atlanta, Georgia. Kevin (played by André Holland from Cinemax’s show The Knick) reaches out to Chiron, still pretty vulnerable like in his younger years, to meet up after not seeing each other for over a decade.

What I admire most is the fact that a simple coming-of-age story, which could have easily gone down a road filled with clichés, is treated with artistry and grand emotion. This is one of those films where the story stays focused on its characters while also addressing big themes such as self-discovery, sex, love, family, and poverty. Yet, what Jenkins does so brilliantly is never making the film preachy. While the script and dialogue are brilliant, it’s what is not said that resonates with us. This is what makes Moonlight such a quietly devastating and beautiful film: we effortlessly identify with the main character through emotions expressed in moments of silence. When Chiron doesn’t speak, he tells us everything through his facial expressions.

The film is a triumph of masterful acting. All three actors portraying Chiron deserve Oscar nominations, as well as Naomie Harris (giving a career-best performance) and an excellent Mahershala Ali. This is a film where its characters are not bound by usual stereotypes but are shown as people that seem so real and believable. The roles of Naomie Harris and Mahershala Ali are two examples: Paula is a truly caring mother that turns into a monster when smoking crack or begging Chiron for money, and Juan is a drug dealer (no least being Paula’s dealer) that lives a normal life in a house with Teresa.

This is a film that announces Barry Jenkins as a major filmmaker. What he has crafted is a cinematic tour-de-force of stunning feeling and ravishing romance. It deserves to be seen in a theater, where the audience can truly experience this work of art through the medium of film.

This is the best film of 2016, and an early pick for one of the best of the decade.