If you're up for a challenge, try to argue against these bulletproof philosophical arguments for why we should all stop kidding ourselves and go vegan. 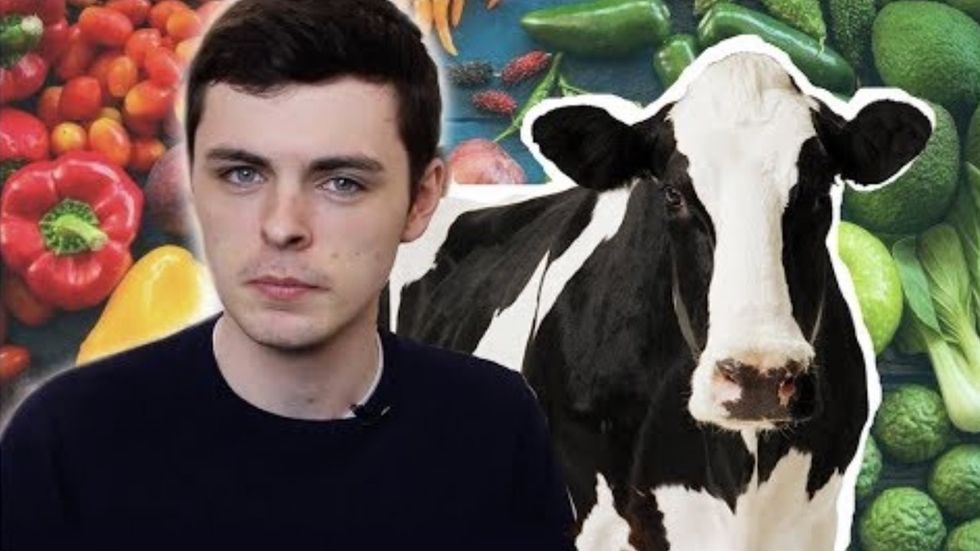 Alex O'Connor is a popular YouTuber who typically discusses philosophy and skepticism. This week, he released a video on a philosophical defense of veganism. What makes this interesting is that Alex is not vegan himself, but he clearly states that the reasons discussed in the video will eventually lead him to adopt a vegan lifestyle if no one can prove his arguments wrong.

The fact that he is openly promoting veganism while admitting that he himself has not yet made the leap delivers more impact to his reasoning. It demonstrates that the questions he poses in the video are so powerful that they are convincing a meat eater to stop eating meat right before our eyes. The best way to summarize O'Connor's incredible video (although you really should just watch it yourself) is to list a few of his arguments, so here they are.

The boundary that we have built between humans and other animals is irrational and unwarranted.

Why do we always forget that we are animals ourselves? O'Connor quotes Peter Singer's book "Animal Liberation," noting that we tend to box "animals" together into a distant category, such as oysters and chimpanzees, while in reality, we are much closer to chimpanzees than they are to oysters.

If humans can be distinguished from other animals because of our superior intelligence, does that mean we innately have a higher value?

Meat eaters may argue that humans have the right to murder and eat animals because we are smarter than them. Philosophically, one would counterargue with the question: does that mean we can murder and eat humans with lower intelligence? Clearly, the answer is no. This means intelligence is not the only thing we use to justify mistreating and killing animals.

No matter how we look at it, we couldn't morally justify killing and eating a "dumb" human simply because they are the same species as us.

And the fact that we're the same species as the living being in question has no real moral relevance in itself. It's the same as appealing to your own race, or gender — it's not a legitimate argument. The point here is that the meat eater's argument lacks consistency. One can't justify eating animals simply because they're less intelligent, while also agreeing that it still wouldn't be right to eat a human with the same level of intelligence as an animal.

The thought experiment from "A Theory of Justice" should apply to all living things.

Imagine being an innocent baby behind a curtain, about to enter the world. You don't know anything about yourself yet (ie. black, white, male, female, et cetera). In order to design a fair society, we should take the position of this baby, because we would design the most just system without biasing it towards our own group.

O'Connor takes this useful experiment a step further: as the baby behind the curtain, what if you didn't know what type of living thing you would be? Have we designed society to be fair to all living things? Obviously, our world is heavily biased towards humans. But when you place yourself as the baby, and you don't know what you'll end up being, wouldn't you want to make sure all beings have a fair chance at a good life? By the way, you'd be three times more likely to enter the world as a chicken than you would a human. O'Connor says here: "Nobody in their right mind, from this position, would design a society that permits the meat industry as it exists today."

"Stranded on a desert island and forced to choose between killing a pig and a human" is not the situation we're in.

This argument that many use to corner vegans is simply irrelevant. Just because someone would kill a pig over a human on a desert island, doesn't mean that an entire system of brutal factory farming is justified. The reality we're facing is more like this one: "Would you rather save a drowning sheep or give a child a piece of chocolate?" It's not about valuing an animal's life over a human's. It's about valuing an animal's life over a brief moment of pleasure for the human. Easy choice.

All animals are equal.

Some would say this is a ridiculous claim. But what if I said that black people and white people aren't equal because they have clear physical and cultural differences? The point is that differences like these are completely irrelevant in determining someone's rights and moral worth. And even if you didn't believe different humans had equal worth, you still couldn't justify one being able to murder and eat the other. As O'Connor says, "even if we do see animals as having less moral worth than humans, this doesn't justify us treating them as though they have no moral worth at all."

vegetarian vegan
Report this Content
This article has not been reviewed by Odyssey HQ and solely reflects the ideas and opinions of the creator.