A New Madonna Era Is Upon Us, And We're All Better Off Because Of It

A New Madonna Era Is Upon Us, And We're All Better Off Because Of It

Madonna is returning with her new album, "Madame X," and plans on shaking up pop music once again. 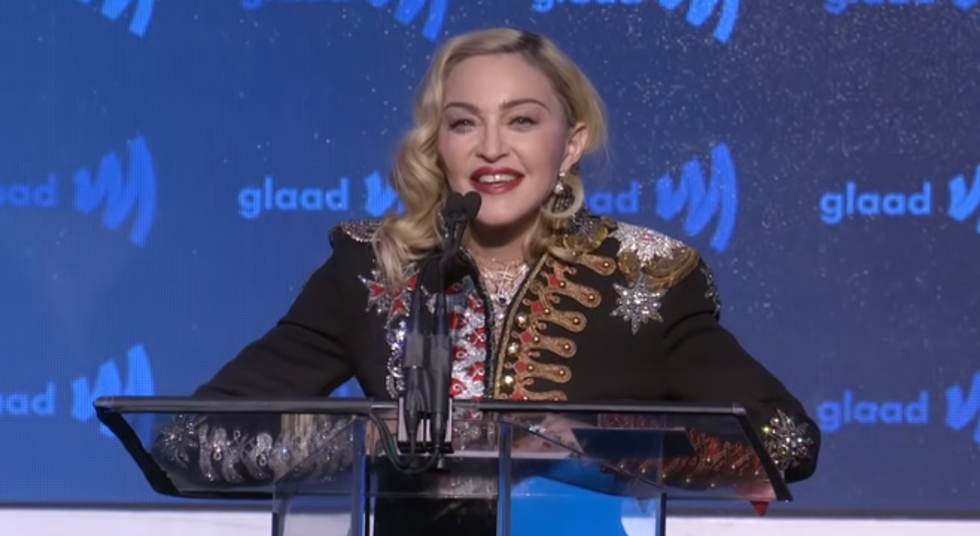 When Madonna is about to release a new album, things feel a bit different. There's a hint of excitement in the air. Award shows somehow become slightly more tolerable. Gay men everywhere start saving their money as to not do too much damage to their bank accounts.

This time, Madonna is coming back with "Madame X," due out June 14. The album's title comes from a nickname given to her by none other than Martha Graham. It was during Madonna's early days as a dancer in New York City. Graham said she couldn't figure Madonna out since she kept changing personas. So, Madame X was born.

Since announcing the album, Madonna has been all over the place promoting the release. She gave a brilliant performance of the album's first single, "Medellín," with Maluma at this year's Billboard Music Awards. She incorporated state-of-the-art technology to project holograms of Madame X's different personas during the performance. It was an exciting moment that showcased Madonna's drive hasn't slowed down a bit. Even though some might call her "try hard," it's quite amazing to see someone put that much effort into a performance. Particularly when the performer could just rest easily on the benefits of her past success.

Madonna was also honored at this year's GLAAD Media Awards in New York City. She was presented with the Advocate For Change Award. The honor was long overdue in my opinion and when you listen to Madonna's speech, it becomes clear why. Madonna hasn't just been a gay icon in a stereotypical way. She has been an ally in the truest sense of the word. She found her place with the help of her dance teacher Christopher Flynn, a gay man, who encouraged Madonna to move to New York City.

When the AIDS epidemic hit in the eighties, nearly every gay friend Madonna had died. She was one of the first mainstream figures to use her platform to raise awareness. She did everything she could to advocate for research and a cure. When Madonna teared up during her speech, it was clear how painful this period was for her. It also gave us a hint of her vulnerability; a softer side she rarely lets the public in on.

People of my generation and younger ones will never know what it's like to lose all of your friends one by one. The experiences of Madonna and other gay rights activists had at that time was a very unique one. Their fight is one we should all respect. After all, it got us to where we are today. After presenting the Vanguard Award to artists who haven't done much (if anything) for the LGBTQ community in recent years, honoring Madonna helped restore some credibility to GLAAD.

Madonna hasn't been hitting all the right notes lately, however.

In a recent interview with British Vogue, Madonna claims that she is "being punished for turning sixty." The truth is, Madonna often does things deliberately to provoke people. So why play the victim when people respond the way you wanted? A better response would be, "I'm trying to show that you can still be sixty and behave this way." When she laments about being "punished," she loses me.

Madonna also says that men don't experience ageism and the treatment she's been receiving lately is misogynistic. I think that's too simplified of an answer. I'm sure in the first two decades of her career, misogyny played a large role in the controversy Madonna faced. There were no women doing what she was doing at that time.

However, there are tons of older women now proving you don't have to slow down because of your age. When Demi Moore dated Ashton Kutcher, people applauded her for scoring a hot younger guy. When Janet Jackson released a song with Daddy Yankee last year, people weren't calling her desperate. When Sharon Stone posed nude in her fifties, she was praised. If it were misogyny, Madonna certainly wouldn't be the only target.

I also think it's wrong to say that men don't experience ageism. If a man is trying to date a younger woman, there's a common perception that he's a creep. Men are often seen as perverts or predators in age gap relationships. Sure, if you're Mick Jagger you can get away with it. But the average Joe on the street can't. Even Celine Dion's now-deceased husband was the butt of many jokes during their marriage. And gay men know all too well the unhealthy and unrealistic focus placed on age in our community.

In that same interview, however, Madonna defended Michael Jackson from the "lynch mob mentality" that erupted following HBO's "Leaving Neverland" film. She voiced her belief in "innocent until proven guilty" and emphasized the need for proof. Madonna claimed that even though she hasn't seen the film, she would give it a chance, but pointed out that "sometimes people lie." This is a powerful stance for someone like Madonna to have so openly. In an age where everyone is afraid of offending special snowflakes, Madonna's stance is a refreshing one.

Madonna also appeared on the finale of Eurovision in Tel Aviv, Israel. She performed "Like a Prayer" and her new single "Future" with Quavo. Of course, the Israeli-Palestinian conflict reared its ugly head in. Several pro-Palestinian organizations were calling on Madonna to boycott the show. But Madonna is no stranger to controversy. She released a statement before her performance saying that she wouldn't "stop playing music to suit someone's political agenda."

During the performance, Madonna called for unity by showing two dancers, one wearing an Israeli flag and the other wearing a Palestinian flag, walking arm-in-arm. The message was a nice one. However, it doesn't seem to be a very realistic one. The Palestinian leaders are terrorists who want Israel destroyed. They don't want peace or a two-state solution. I'm sure there are plenty of Palestinian civilians who want peace, but it doesn't look like a possibility right now. Still, Madonna sent the right message and refusing to boycott Israel was a good move.

Whether you love her or hate her, Madonna still knows how to command attention. She knows how to shake things up. She knows how to provoke dialogue. Out of all the new songs already released, "I Rise," is my favorite. It perfectly captures Madonna's essence and message. It's political, socially conscious, and inspiring. I, for one, can't wait to see what the rest of the album has in store or what the Madame X Tour will be like once it kicks off in the Fall.

The Queen of Pop is back.

madonna
Report this Content
This article has not been reviewed by Odyssey HQ and solely reflects the ideas and opinions of the creator.