That person is someone’s child. Someone’s loved one. Logan Paul made that person a subject for his content to earn views and followers. 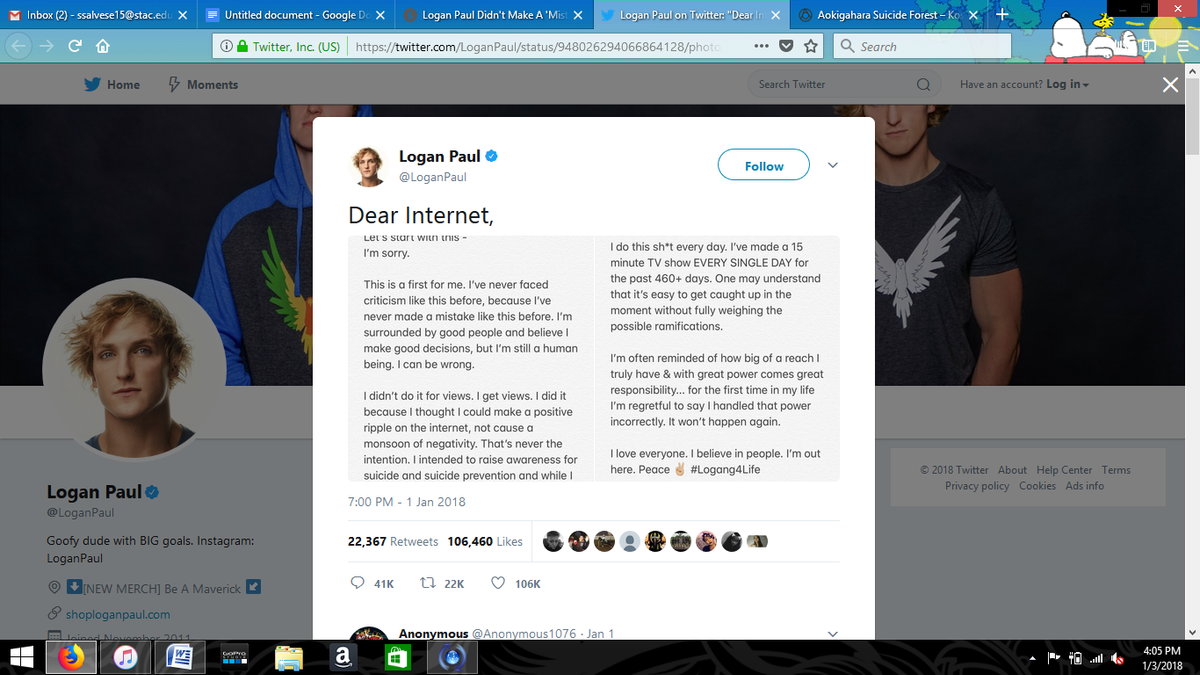 I originally first heard of Logan Paul through the App called, ‘Vine’. Vine allowed people to make short 6 second videos. Logan was a regular funny guy, his content was original and made me laugh. So, I followed him. I wanted to be kept up to date on more of his content. I guess others thought the same thing I did, because his fame grew rapidly. When ‘Vine’ started to die down, I moved and followed him on Instagram and Twitter, as did a lot of other people. Logan has a huge fanbase. But that huge fanbase went to his head.

As Logan became more famous, he became more arrogant. It was quite obvious in what he shared online. His content felt more staged and forced and I soon found that I no longer found Logan to be the same funny guy he originally once was. He became obsessed with views, the fame, the fancy materialistic things, his fans, and all of the attention.

So, I unfollowed Logan. I couldn’t stand to follow someone who was so wrapped up in themselves and the fame that they forgot how to be a normal person.

Fast forward to a few days ago, I found that Logan Paul made headlining news… But not in a good way.

I saw a picture making fun of Logan Paul, and clicked on the comments to see what all the fuss was about and honestly, I wasn’t surprised.

Recently Logan and his friends were in Japan and decided to visit the Aokigahara forest, also known as the ‘Suicide Forest’. This forest is the second most popular place to take one’s life next to the Golden Gate Bridge. While there, Logan and his friends were filming and came across a dead body. The group not only filmed the body for all to see, but are also heard making comments and laughing.

While I understand people make mistakes. How does one mistakenly video tape, edit, and post a video basically mocking suicide without thinking it’s a bad idea? It was disgusting. That person is someone’s child. Someone’s loved one. Logan Paul made that person a subject for his content to earn views and followers. Well wish granted. His name, and video has been googled more than imagined the past few days, but not in a good way.

Since the backlash of the video, Logan has released a video and written apology. But I would like to dissect his apology because it’s a disgrace of an apology.

In Logan’s public apology he states he wanted to save a life and make a change… If that were truly the case, he wouldn’t have uploaded the footage of him and his friends laughing and making remarks about the body they had found.

Logan’s apology then states he records and make a 15 minute TV show everyday and can get caught up in the moment without weighing out the consequences and how he’s reminded of his large audience... Absolutely NONE of that information is relevant. Yes, people can sometimes get caught up in the moment and forget to weigh out the consequences. We’re all human. But your TV show and how long you’ve been filming for has absolutely NO relevance to your apology.

His final “comment”? If you can even call it that, is his hashtag, ‘#Logang4Life’

No one cares about your hashtag of fans. This is an apology, not an opportunity to connect with your fanbase and gain views or likes. Stick to the apology without making the entire thing about you and your fanbase.

His apology did not seem sincere or genuine and I don’t believe it. I believe he did it because he didn’t get the feedback he thought he would. Making suicide a joking matter for his “TV show” isn’t just disgusting, it’s disrespectful. Disrespectful to people who have lost loved ones to suicide and disrespectful to the deceased’s family.

We give people like Logan Paul attention through likes and follows, and for what? To give him money so he can entertain with disgusting content such as this? Why? I’m guilty of it too. I followed Logan for a LONG time before I finally hit the ‘unfollow’ button, but I’m glad I did.

I know nothing about Logan Paul personally. All I know is what he posts online and based off of what he has online, he needs to step away from the internet and realize there’s more to life than followers, likes, and a large fanbase.

We’re all guilty of judging people based off of what they post online. So if anything, watch what you post.

Logan Paul, I hope you’ve taken away a very important lesson from all of this.