Everyone Likes Fireworks Except My Parents
Odyssey

Everyone Likes Fireworks–Except for Our parents Who Served

Our parents sacrificed so yours didn't have to. 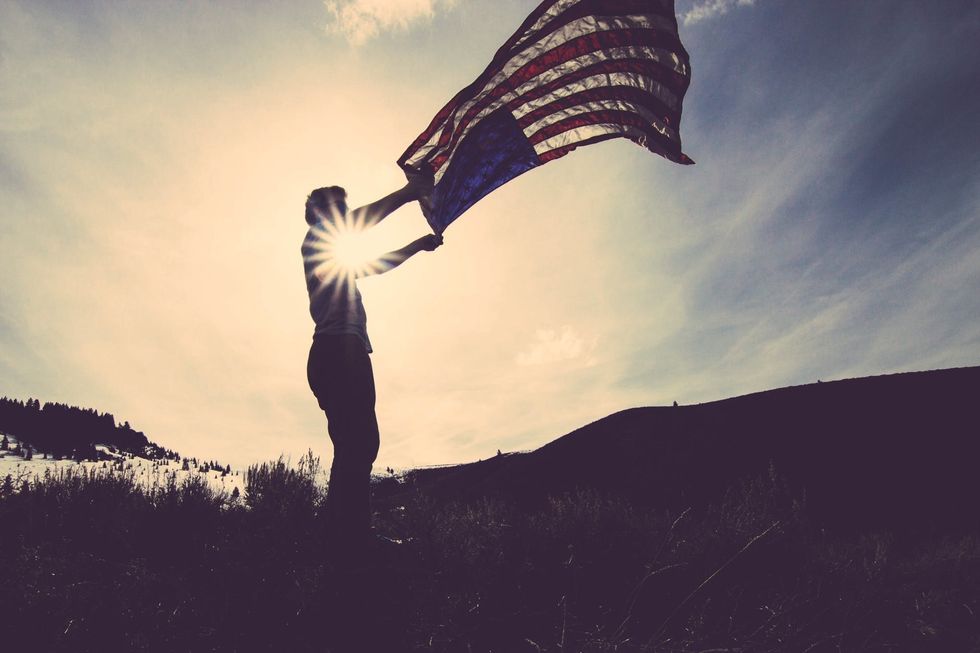 The America I see is different from the America you see.

I see toddler me sitting under the ironing board while my mom and dad starched their uniforms. I see my sister and I standing on a flight line with hundreds of other families waiting to see that specific black crop of hair belonging to our dad for the first time in months as all the airmen step off their plane. I see my mother's hand wipe away the tears on her cheeks when the National Anthem plays.

I see my parents when I see America.

We're a military family. I am actually the literal outcome of the United States Air Force.

Mom and Dad both got stationed to Sembach, Germany somewhere down the line post-Basic Training. After a marriage license in Denmark, an Airmen of the Year Award in Utah, and a baby girl in Georgia, the two (newly three) were re-stationed to good ole Germany and had me.

Obviously, you don't remember the baby years, but the first memory I believe I had was seeing Katie Couric on the Today show during 9/11. Mom told me years later when my memory had actually developed, that the whole base was on lockdown for days. Windows were drawn. Do not leave your house. Hide any and all signs you're American. A drive to work became four hours long because of all the heightened security. After the Twin Towers went down, everyone assumed an overseas base would be hit next. A second Pearl Harbor.

That would not be the only standbys for bombings my parents would face in their lifetimes.

Years later, the military re-stations us back in the good ole U S of A. We live in New Mexico now, and my sister and I attend Barry Elementary. This will be my first school and Megan's second. In the span of our lives in the American school system- I will have attended six schools, and Megan eight.

The military kid math is simple enough. Every four years, if you're lucky to not get stationed earlier than that, your family gets sent to live in a new state, with a new town, with a new house, and a new school, full of new kids that you'll move away from in T-minus 1,460 days. Better start saying your goodbyes.

That averages out to four best friends that you won't see the last day of school with, three states that are your "home state", two separate times your family was technically homeless because you had to move from your last home but didn't have a new state to move to yet, and one very non-specific but all-around American accent.

Additionally, the math gets a little harder when it's counting the days until your parent comes home from a deployment- or leaves. My parents have been deployed to Korea, Afghanistan, Diego Garcia. That adds up to about 40 months without one of my parents.

Jump forward a few years, and the Memerys now live in *cue lassoing rope sound effect* Texas. My sister and I are attending Dyess Elementary- a school only an arm's length away from a base where all the military families sent their military kids. This school was so patriotic that it was named after the Air Force Base that was an arm's length away along with having its mascot be the ever-iconic Dyess jet.

At the end of every school year, our school would have a big "I Love America" show, and the highlight of the year was hearing the whole gymnasium erupt in the sound of parents and kids alike singing "The Salute to Armed Forces". Honestly, it's a bop, and I have no shame in saying that.

There, the military seemed like a unifying factor. We wore our red, white, and blue with as much pride as our baby-bodies could muster because we knew what it took from our moms and dads to have the right to wear them.

Things were even worse when there was an Exercise on Base. An Exercise is when everyone on Base has to run through their plans in case of an emergency and strand their kids in those poor, deserted Youth Centers until at latest 9 p.m. Just Megan, me, and one late night staff member would heat up some hot pockets from the Snack Shack and sit quietly while Cartoon Network played until our weary parents, covered in Chem gear, finally picked us up.

Jump to the few years where my sister and I had to go through puberty without our mom or our dad.

Mom was gone at the beginning. She deployed to Afghanistan in my sixth-grade year and didn't come back until the following year when we changed schools, houses, hairstyles (Megan got the emo bangs), and gained 30 pounds each. I remember I didn't know how to put my earrings in when I was little, so I'd always go to her for help. I remember the day, end of summer when I did it by myself and I opened my mouth to yell "Mom!"

My mother would call me every Tuesday night as I sat on her side of her and my father's bed, so we could watch Glee together. Dad would always come in to go to sleep before the episode ended, so I'd say goodnight to Mom during the commercial break.

Dad was gone at the end. He deployed the end of my seventh-grade year and didn't come back until after many critical months when his absence began to have a toll on our development. When things got hard for Megan at School Number Five, she didn't want to turn to me or our mom. She wanted only her dad and he wasn't there, which left a lasting effect on her.

My mother told me recently how she wondered maybe if they left the military a little earlier, and didn't have to go on those unfortunately timed deployments if things would've been better with her. Would my parent's not leaving to serve this country spared her from the years of consequences she endured?

Does your parent ask you that question?

Thankfully after that deployment, Dad hit the mark. Twenty years in the military, retiring as Master Sergeant. Mom got out immediately after too with thirteen years as a Captain, but even though they left the job didn't mean that what they experienced in their 20 years would leave them alone.

They both can't sleep. They're terrible at it. Snore as if they're screaming, and when my dad wears his oxygen mask, as to help with that snoring, no matter how peaceful and deep his sleep is, he will pry that mask off as if there were hands on his throat.

It isn't called "serving your country" for nothing. My mother and father worked, and struggled, and gave so much of themselves to ensure we all saw another day as free Americans. My parents are two heroes amongst thousands who give and give and give day in and day out to keep that freedom for us all.

So yeah, we can't take my dad anywhere without him busting out the ole "Sorry to bother you, but we're military too. My wife and I are retired Air Force…" and while it makes getting the check or the receipt take soooo much longer, I love it because I know how hard those hands worked, what those eyes have seen, and how much he has earned the right to be proud of his country.

The America I see is different from the America you see.

I see America looking out at my mom and dad as an F-16 flies overhead. My mom calls that the "sound of freedom", but I think looking at them is.