Yes, this post is 100% about leggings and yoga pants. 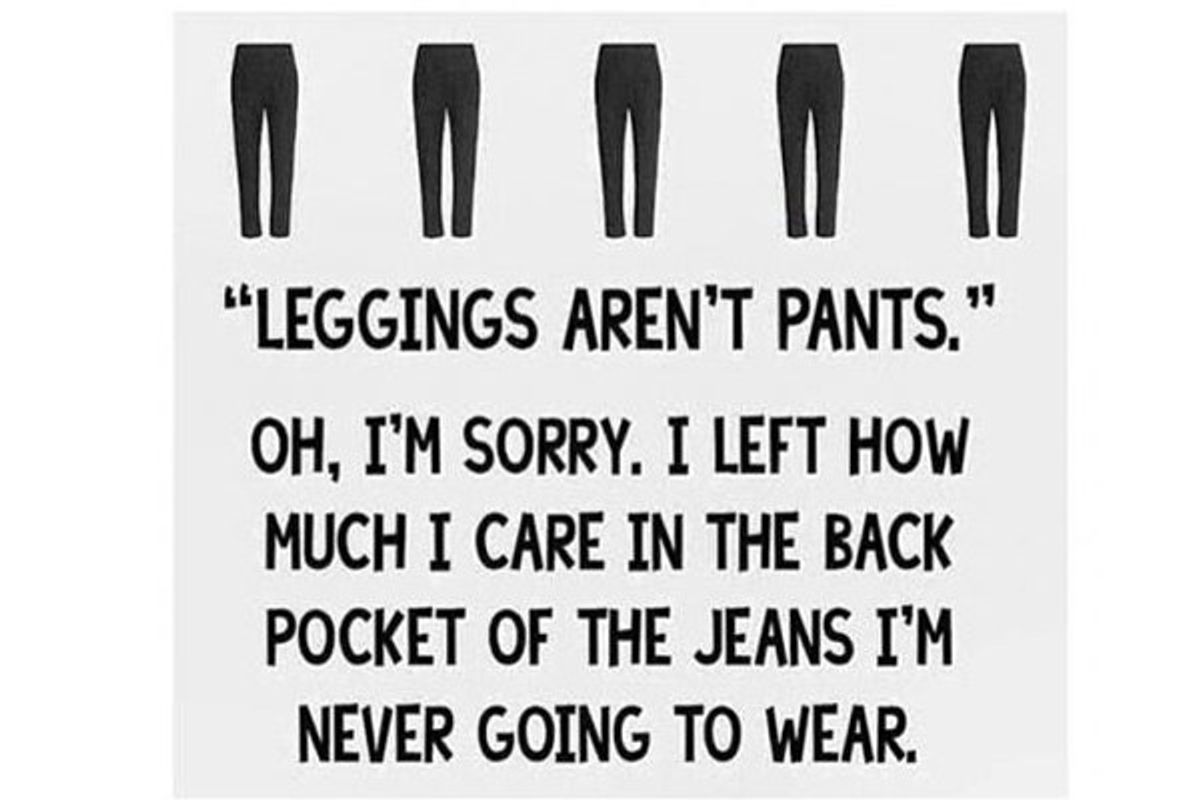 Leggings season is upon us, ladies and gentlemen. Well, more like its been around for a few months but now is full - fledged legging season. And, of course, with leggings season comes the completely ridiculous, yet widespread conversation about why girls should not be allowed to wear leggings to school because, apparently, the rest of us rational humans missed the memo that it was still the 1700s and women should be covered in loose fitting clothing from neck to ankle.

There have been dozens and dozens of cases in 2015 alone about girls being sent home for wearing leggings as pants to school. Yes, I understand that certain schools dress codes prevent leggings being worn without a dress, skirt, shorts, or tee shirt long enough to cover a girl's butt. But at the same time, the reasoning is usually very flawed, and that's where the main problem lies. Girls are prohibited from wearing leggings so they aren't a distraction in the classroom...Hmm see what I would assume being a distraction in the class room is a student who keeps talking over the teacher, doesn't raise their hand, comes into class late and causes a disruption, has their phone going off in class etc. What doesn't come to mind as a distraction in class is what someone is wearing on the lower half of their body; or what shirt they are wearing, or if they are wearing a hat. As long as the leggings or yoga pants aren't see through there is no reason for a 12 year old girl to be ridiculed over her outfit choice.

While girls are being sent home, scolded, or even suspended for wearing leggings because lets face it 90% of leggings or yoga pants are not being worn to partake in yoga (and yes I am part of this majority) THEY ARE COMFY. Leggings are comfortable; they are soft and stretchy and something you can wear all day without being uncomfortable. And should girls at this age in a learning environment be subjected to sit uncomfortably all day? NO! Should boys either? NO! (that's called equality) so why are boys allowed to wear athletic pants in class which is essentially the equivalent of yoga pants? I know some guys who wear long compression leggings with shorts over them because it's their choice, but what if they didn't want to? Then they shouldn't have to because it is their choice plan and simple.

The fact that the problem of leggings being worn out in public and to school is ridiculous all together. A specific case of this ridiculousness is Montana State Representative David Moore (R) who in early 2015 proposed House Bill 365 which would basically outlaw any tight fitting beige clothing that could resemble if you weren't wearing any pants or anything covering your lower region. Moore would have preferred to ban yoga pants of all colors but wasn't sure if police would have been able to enforce such a broader ban.

Now, I personally won't be sporting any beige or skin colored yoga pants or leggings out and about any time soon, but the notion that people actually have such a problem with yoga pants to the point of trying to outlaw them is absurd. By the way this bill has not been passed, it is currently stalled in the Senate House Judiciary Committee because of confusion over what the bill would actually enforce.

The only thing about young girls' bodies we should be focused on right now is the staggering rate of girls who have poor body image. Girls at this middle school and high school age are extremely susceptible to comments about their bodies. So if we are telling them they can't wear certain things how is that going to positively translate to how they view this bodies? I have a very athletic body type and like wearing leggings because most jeans or trousers don't fit comfortably without being too loose in the waist. Girls are dressing for the classroom at this age not the board room, we should be teaching them how to be comfortable in their skin instead of critiquing their appearance because it is a "distraction."

Caitlin Marie Grimes
University of South Florida
11259
Beyond The States