Sorry, Lara Trump, Defending Your Father-In-Law For Putting Down Another Woman Makes You Anti-Women

Sorry, Lara Trump, Defending Your Father-In-Law For Putting Down Another Woman Makes You Anti-Women

I, as a voting citizen of this country, am extremely disappointed with you handled this situation. 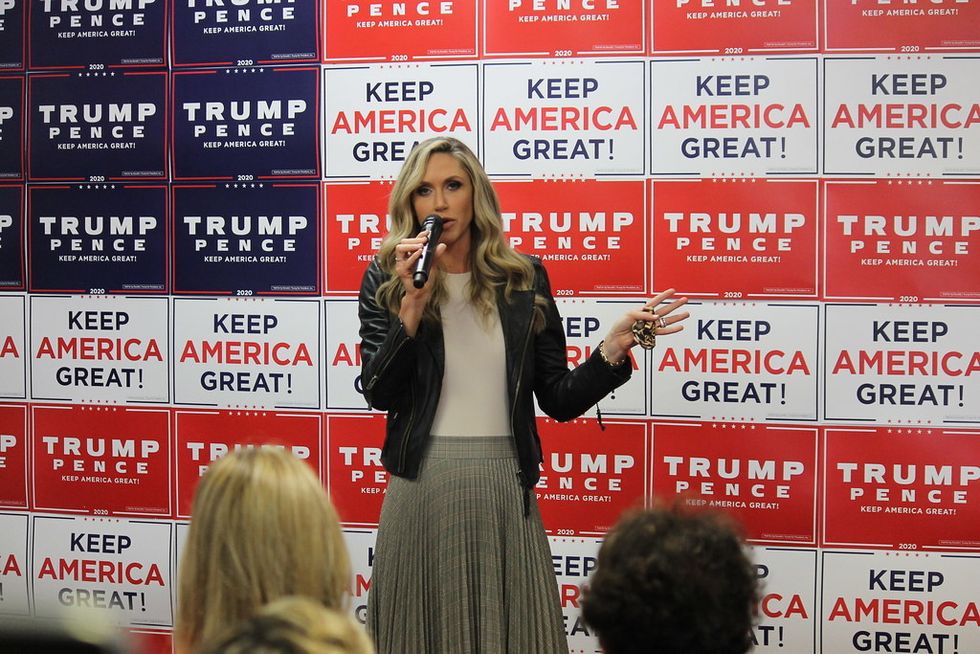 In case you missed the news, Lara Trump, the President's daughter-in-law, defended her father-in-law's seriously dangerous rhetoric when there were chants of "lock her up!" at one of his rallies earlier this week. That chant was in direct response to Michigan's governor, Gretchen Whitmer, and how she's handled the COVID-19 Pandemic in her state.

(Yes, the same governor who was in the headlines because she was the lead target in a kidnapping plot.)

In an interview on CNN's State of the Union last Sunday, Lara Trump was quoted as saying, "look…the president was at a rally, it's a fun, light atmosphere. Of course he wasn't encouraging people to threaten this woman."

Well, let me just say Mrs. Trump, you couldn't be any further from the truth of the matter if you tried. Your father-in-law's dog- whistle rhetoric is dangerous at best, and a threat at worst.

Quite frankly, though, I'm not sure which is worse: his rhetoric, or your defense of that rhetoric. You had the perfect opportunity to stand up for not only this woman, but all of the women who have been harassed and put down by your father-in-law.

Isn't it bad enough that she was the target of a kidnapping plot? Now, you're defending your father-in-law's dangerous and careless words by laughing it off as, "oh, well, it's a 'fun, light atmosphere."

Ma'am, there is nothing fun or light about riling up a crowd and hurling insults at someone simply because the person on the stage doesn't agree with how the response to the ongoing pandemic was handled. Your father-in-law continues to incite hatred and violence, all the while refusing to take accountability for literally anything that his words and actions have caused.

You had the perfect moment to stand up to the divisiveness that he created, and instead of taking a step back and truly looking at his behavior, you laughed it off and shoved it under the rug, so to speak.

For that simple fact, you seem to be pretty anti-women to me.

What happened to the days of women sticking up for other women instead of bashing them or supporting them? Now, don't get me wrong here, I'm not trying to bash you or throw you under the bus in any way whatsoever. I just wish you understood the ramifications of what you said and how important that moment was.

Like I said before, you had the absolute perfect opportunity on national television to take a step back and admit that what your father-in-law allowed to happen at that moment was wrong. But, instead, you chose to defend someone whose dangerous rhetoric has incited violence on numerous occasions. That makes you anti-women in my book.

I will say that I, as a voting citizen of this country, am just extremely disappointed in how you handled this situation.

Maybe you'll learn from this moment and have future opportunities to be a better person— a better woman. I'm not giving up the hope that one day you'll change, but in this current moment, your attitude seems pretty anti-women to me.