Kim Kardashian's White House Visit Wasn't For Trump, It Was About Policy

Kim Kardashian's White House Visit Wasn't For Trump, It Was For The 2.3 Million Americans Behind Bars 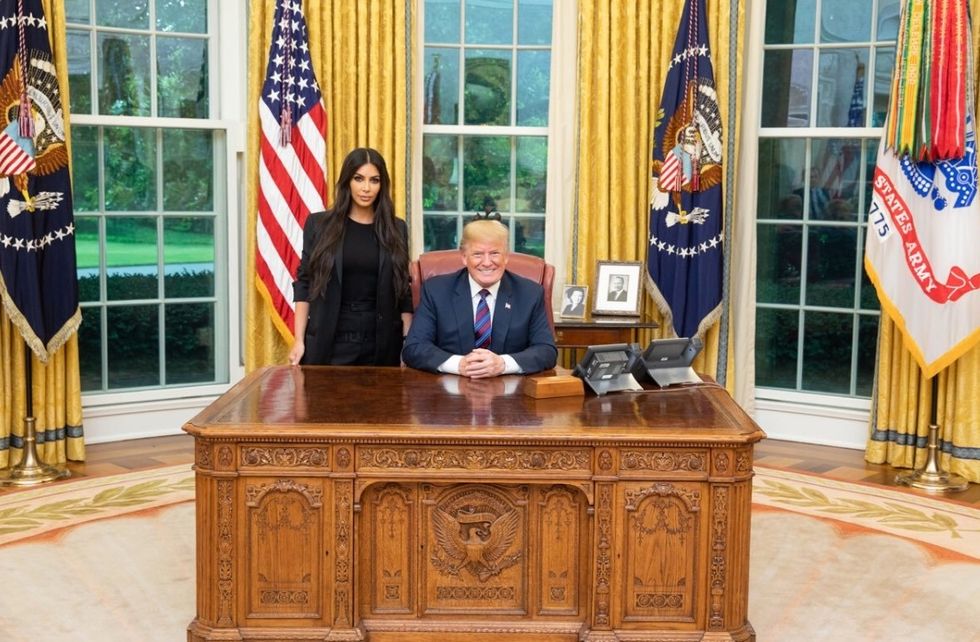 Out of everything that's happened concerning politics in the past week, the one event that's sent ripples through the news was Kim Kardashian's meeting with Donald Trump over prison reform. It was seen as the most significant political event to have occurred within the past week by tabloid culture, people, and Instagram. Every major news outlet also decided to focus, dissect and receive statements from reality star-turned-mogul Kim Kardashian West on her meeting with Trump.

The first question that popped into my head was, why?

My first thought was that this was a form of a publicity stunt, a way of having the public see that they are more than just a family concerned with money and fame. Originally, I was annoyed by her statements. Because they reflected a form of voluntary and self-asserted pat-on-the-back for her "efforts." However, I do give Kim Kardashian West credit for understanding that her power is no longer limited to the gluttony of fame and social influence (as exemplified by President Trump).

At the end of the day, things such as fame and money give people a lot of power. Before I continue, as well, I'll say this: I'm not a fan. I don't praise the Kardashians or even watch their show (which I can't believe is still on), and don't even follow any of their sister-clan on social media. Yet, while many would like to deny that the Kardashians are a powerful family, they are. They've created a global brand, and remain relevant through the web of scandalous and culturally-insensitive marketing strategies that have kept them in the center of the public eye.

From dominating the media, pop culture, fashion, and entertainment industries they are always a subject of interest, to the point that their latest scandals are seen as more "significant" and overshadow other current events. They are an "it" factor in anything media-related, causing everything they touch or headline to instantly trend.

By understanding the extent that Americans love scandal they've built an entire empire in an industry they now capitalize on in return. Their audience isn't just limited to America now, either. Wherever you go in the world, it's almost an automatic assumption people are aware of the last name Kardashian or even Jenner. They have received exactly what they were expecting and aiming for: a multimillion-dollar net worth that will span across multiple future generations and, of course, endless stardom. The carefree life they envisioned is now achieved.

As much as many would like to complain and claim they are a family not worth the hype, since they don't have any recognizable talents and exploit Black culture for profit, they are here because of the attention everyone gives them.

The only reason I felt this issue was important for me to write about is, is because it's another situation that praises the Kardashians, and isn't highlighting an ongoing national issue.

Currently, the American incarceration system holds 2.3 million people, with the annual cost of imprisonment at approximately $81 billion. In total, there are 3,283 jails in America. All of which are housing a combined half-a-million pre-trial inmates. What does this mean? That these are people who are currently imprisoned because they couldn't make bail.

According to a criminology report by Time, if the U.S. released all of the prisoners who are locked away on nonviolent or lower-level crimes (25%), those who are still behind bars serving tirelessly long sentences that if released would no longer pose as a national or local safety concern (14%), or the inmates who are imprisoned without any valid public safety reasons (39%), would save the nation approximately $20 billion annually.

Personally, I believe these are the conversations that Kim K. and Trump's meeting should create. I do applaud Kim on her success in returning Johnson to her family. She recognized this was a human being that had her freedom taken away over a petty nonviolent drug crime. She did a great thing and Johnson's family is more than happy that she's back home with them.

Yet, the underlying dilemma that landed Johnson behind bars is a lot larger than any reality TV star meeting. It includes the other millions of people who may or may not be imprisoned on petty claims. These are the people who remain voiceless but are undergoing the same issues that Alice Johnson faced.

Megan can be seen exiting the vehicle leaving what looks to be bloody marks on the ground.

Rapper Megan Thee Stallion was shot by Tory Lanez on July 12 after leaving a party in the Hollywood Hills in Los Angeles.

I guess we forget about "Love and Honor" when money is at stake.

I was a proud student at Miami University. Yes, I said was. Not because I graduated or transferred, but because this morning myself and the rest of Miami University's student body received an email stating that we would be returning to campus this month.

You might be asking "Why are you so upset? Most students would LOVE to be going back to college. Consider yourself lucky."

Sorry Skip, But Dak Prescott Is Even MORE Of A Leader For Opening Up About His Mental Health