No guns, threats, or creepy infringement on their privacy necessary. 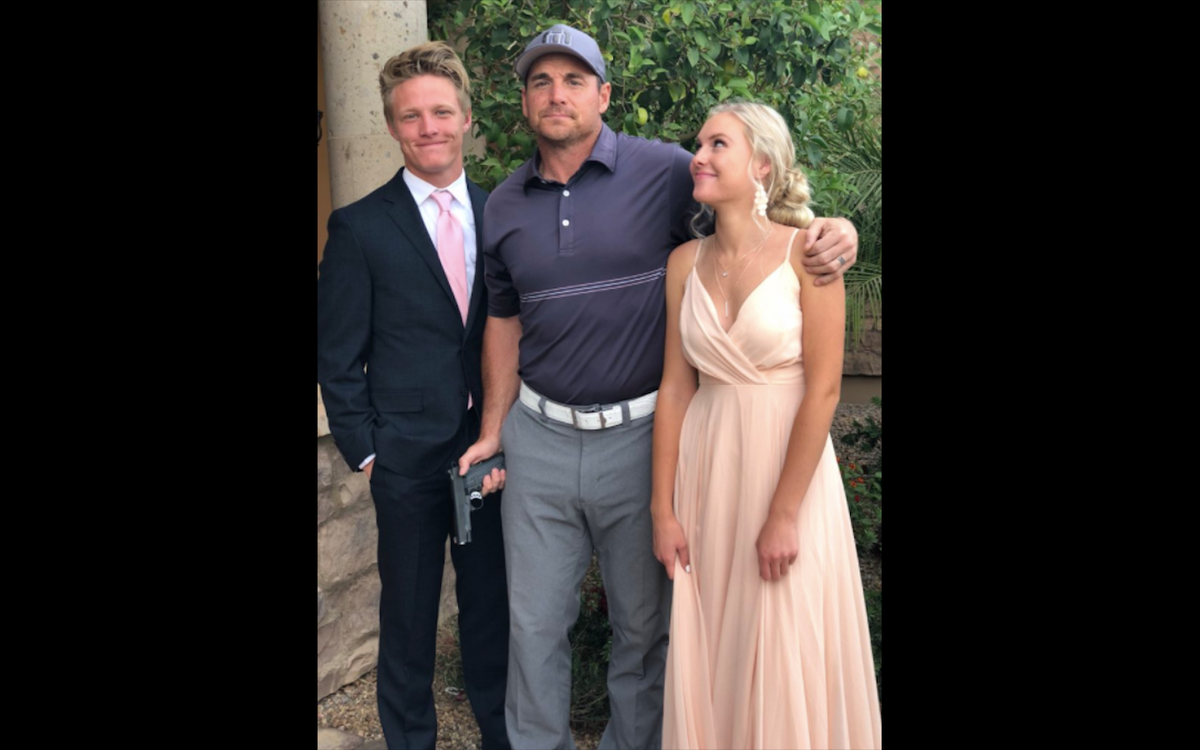 This week, former NFL player Jay Feely caught Twitter's attention by posting a picture with his daughter and her prom date and a handgun.

While the comedic undertones of the photo are obvious, Twitter had a lot to say about the picture and most people weren't happy.

He has since issued a statement of clarification after the tweet went viral, acknowledging that gun safety is an important issue and clarifying that he was in fact joking. Unfortunately, though, the damage had already been done.

The prom picture I posted was obviously intended to be a joke. My Daughter has dated her boyfriend for over a year and they knew I was joking.
I take gun safety seriously (the gun was not loaded and had no clip in) and I did not intend to be insensitive to that important issue
— Jay Feely (@jayfeely) April">https://twitter.com/jayfeely/status/98806798611514... 22, 2018

Feely is far from the only dad who's ever made this joke. It's a largely prevalent theme specifically among gun owners and in country music. Check out the song "Cleaning This Gun" for another example. It's catchy, I have to admit, I just listened to it again voluntarily the other day even though I don't agree with the central message.

But what's really the matter with this picture? After all, it's just dads being dads, right? Wrong. The political, historical, and gender-specific rhetoric behind the idea of dads protecting their daughters by threatening their boyfriends have all combined to create a lot of things wrong with this picture. Here are 4 of them.

1. Gun violence is no laughing matter

This theme has come up over and over and over again this year but it's one that continues to be relevant and timely. Gun violence is a very real issue, with thousands of deaths, dozens of mass shootings, and deep political biases, making it far from a joke. While there is a major difference between the handgun in Feely's picture and the assault weapons that have been at the center of recent mass shootings, threatening to shoot someone, particularly an unarmed teenager, is just poor humor.

2. Parents do not get a say in their daughters' sexual choices

From chastity rallies at churches to purity balls entrusting their sexual purity to their dads to presenting "virginity certificates" to dads at weddings (hint, you can't medically prove someone's a virgin), parents' obsession with their daughters' sexual behaviors, not their sons', mind you, just their daughters, is creepy, intrusive, and disgusting.

Decisions about whether or not to engage in sexual activity, at any point from high school to marriage and on to the rest of their lives, is up to the two people involved, not the parents, the church, the government, or any outside parties. By reinforcing the idea that the parent is in control of these decisions that their kids are supposed to make for themselves, parents like these are perpetuating archaic ideals, destroying the trust their children have in them, and setting them up for destructive sexual behavior down the line.

3. There is an extremely obvious (and dangerous) sexual double standard between boys and girls

While young women are told to guard their purity and that engaging in sexual activity makes them less worthwhile people, boys are encouraged to use sexual conquests to assert their dominance and their behaviors are not focused on nearly as much by parents, religious organizations, or sexual education programs.

If women are taught to remain virginal until marriage and homosexuality is frowned down upon, who exactly are these boys supposed to be having sexual conquests with? Beats me.

These parents criticize their daughters for participating in safe, monogamous sexual relationships but do not give the same attention and threats to people that threaten their wellbeing. By teaching your daughter that she can't trust you, you're setting her up for trouble down the line.

While this entire situation could be passed off as a harmless joke that got a little out of hand, it's obvious that the problems run deep and can have a lasting effect, especially on the girl at the center of the "joke." Bottom line, trust your kids. Believe that they have the self-respect and the critical thinking skills to make healthy relationship decisions and support them in making them. No guns, threats, or creepy infringement on their privacy necessary.