It's OK To Be Gay And Christian
Odyssey 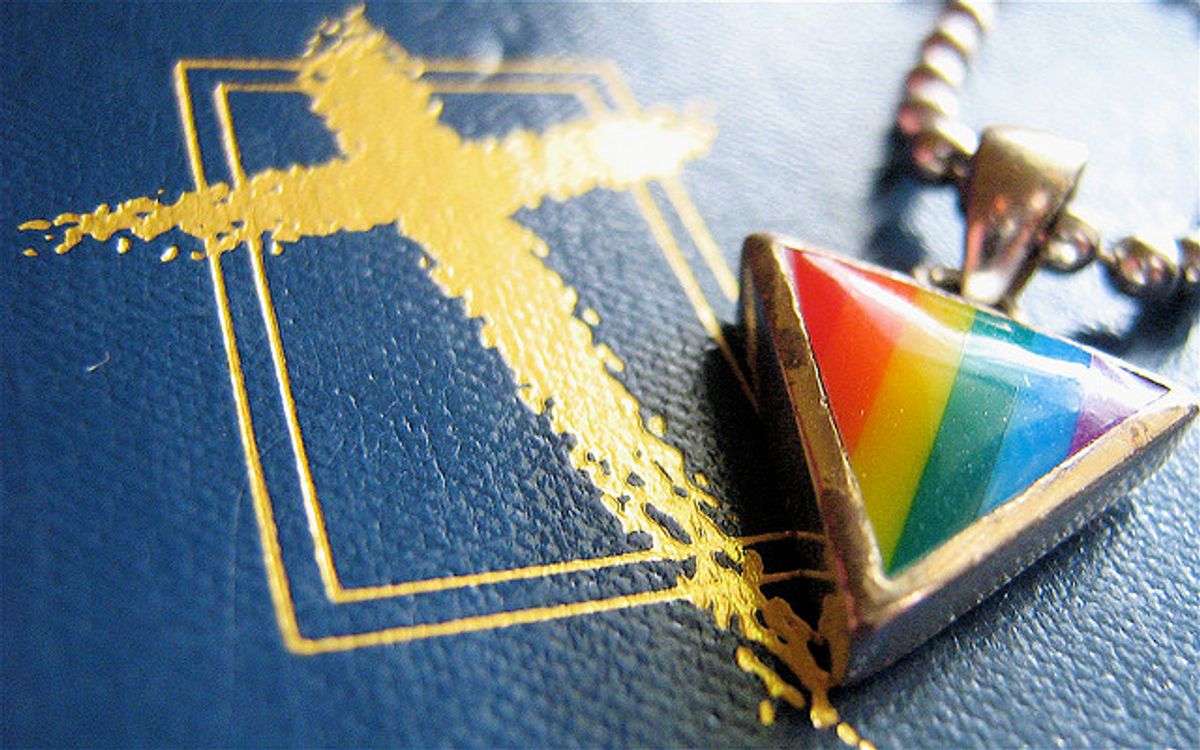 God has always come before my sexuality. So I am writing this article for Him, not for sexual orientation. But I would like to write about how important both are, especially when they collide. My life is just one of the millions of places in which they have collided. So I would like to ask you for the next few minutes of your time to tell you what I have learned as a devout Christian who often hears that her hellish fate cannot be escaped.

God has a path for everyone, one that will lead them directly to His salvation, if they choose to follow it. I never knew who God was until I needed help the day I became so terrified of who I probably was. First I asked for comfort, and He came beside me in my darkness. Then I asked Him for it not to be true, but He denied me of that. Third, I asked Him to show me the way, and not long after, somebody came into my life who I could not love, though he treated me so well. My faith had grown step by step, learning that God is so good to us even when fear and confusion become the blood and bones of our lives. I praised Him for what He had done for me, and our relationship was solidified. God chose that path for me, for whatever reason, and He chose yours as well.

My life at college has exposed me to people and beliefs that I had never encountered before. When my pastor used abortion and marrying someone of the same gender in the same negative context (and there was an “Amen!” in the crowd) I knew there was a silent war at hand that I was unwillingly a part of. From the very beginning, I refused to believe that non-heterosexual love was a sin, and I still do. Why?

Better yet, God is love.

And He is not going to give you up to the devil easily.

“For the Lord your God is God of gods and Lord of lords, the great God, mighty and awesome, who shows no partiality and accepts no bribes.” – Deuteronomy 10:17

God wants you in Heaven with Him and He will stop at nothing -- especially not at the devil -- to get you there.

Every Christian knows that if God did not exist, love would not exist. So why would He create love in places (i.e. between two people of the same gender) that would condemn the people there to hell? We can call God a mystery, say that he cannot understand why he does what he does.

When I hear that the way that I love is sin, I doubt God’s love for me. I doubt that Christ will save me because I refuse to ask for forgiveness for the type of person I can love. As long as that person is mentally and physically mature enough to love you back in the same way, you should not fear that God hates it. How could God hate Himself?

I am sure I am not the only gay Christian who has been emotionally hysterical on the bedroom floor in unmanageable fear of hell despite her soul full of love for the Lord. Because He is so great, God continued to lead me down the path to His salvation through my fear. First, I learned not to doubt the power of Christ. One way or another, He is saving you, and you will spend eternity with Him. This is hard to accomplish if you do not trust the Lord. That is why I begged Him for the truth, and here I am a week later, getting the opportunity to share the truth that he has given to me over and over again; the truth that I have denied countless times because it is unimaginably difficult to fully trust His word. But he has reassured me every time, and I pray He does the same for you.

In the end, God and His indestructible love is the only truth that any of us need to worry about. So you can believe it when you feel it, even if it is for the same gender. It is also true that all of us were designed to be sinners. I will sin in certain ways, and so will you. So no matter what my sin is, I do not want to be accused of sinning while I love another person with all the Godly love I have in my heart.

To whomever is reading this, I want you to know that whenever somebody tells you that you are offending them by acting on your sexuality, God is telling you that, “Love does no harm to a neighbor. Therefore love is the fulfillment of the law.” – Romans 13:10. And when someone tells you that being with someone of the same gender is not “right”, tell them that neither was being with someone of a different race 50 years ago. Ask them to stop being afraid of what they do not know and understand. Quite often we find that we don’t understand God, but because we love Him, our hearts are opened to learn about Him. In the end, we know that He is love.

There is so much I want to tell you, but the Bible can do that for me. For now, ask the Lord for the truth. Then get up and go love the way Christ taught us to – purely, patiently, kindly, humbly, selflessly and truthfully. Finally, I might get reprimanded for this but I’m going to say it anyway.

Caitlin Marie Grimes
University of South Florida
10311
Beyond The States