Is Norman Feeling the Bern?

Is Norman Feeling the Bern? 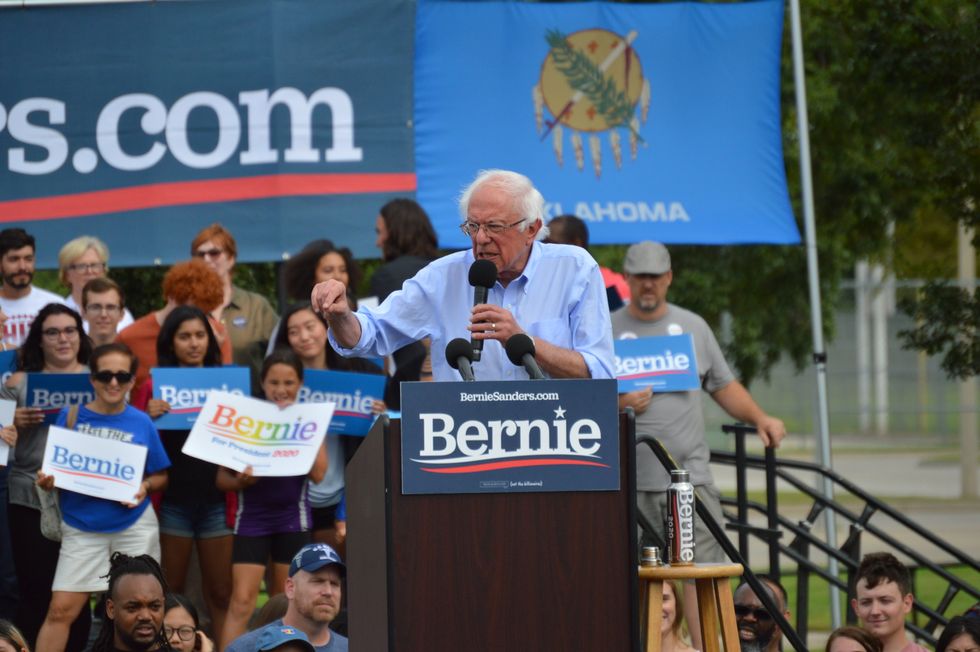 As the crowd of over 4,000 supporters cry out "Bernie! Bernie! Bernie!" they were met with a surprising response. As Sanders, put his new OU hat on his head (a gift from Mayor Breea Clark), he continues to go into a speech, noting that this campaign is not about himself, it's about the American people.

With the 2020 Presidential Election getting closer, Norman has become a focus for many candidates. On the heels of Beto O'Rourke (D) and Sen. Cory Booker (D), Sen. Bernie Sanders (D) adds his name to the growing list of presidential hopefuls that have taken a special interest in this diverse city. Due to efforts by city officials and local student political groups, Norman residents and students from the University of Oklahoma have had the unique ability to expose themselves to an increasing variety of political ideals and platforms.

Oklahoma Odyssey strives to create an atmosphere of nonpartisan reporting, so here are a few direct quotes from the Vermont senator that I found the most relevant:

On the political system-

"And let me be very blunt and tell you what politicians don't tell you... here is the truth... that you live in a political system today that is corrupt."

"We have people who fought and died for American democracy and as president I intend to make sure we have a real democracy, one person, one vote."

"You've got people working two or three jobs in inadequate wages trying to feed their families and 49% of all new wages goes to the top 1%."

"We are going to deal with wealth inequality."

"We are going to make it clear that starvation wages in America are unacceptable. We've got to raise that minimum wage to $15."

On the environment/climate change-

"We have a president who thinks that climate change is a hoax... well, I happen to believe that Donald Trump is a hoax."

On education/debt associated with it-

"We've got to rethink what free public education is all about. It's no longer good enough to go from K through 12th, we've gotta make public colleges and universities tuition free."

"How many of you are worried about student loans? Here's what I want you to think about. 11 years ago... we bailed out crooks on Wall Street who destroyed our economy. If we can give tax breaks to billionaires, if we can bail out the crooks on Wall Street, we can most certainly cancel all student debt."

"Right now we are spending twice as much per person on healthcare as the people of any other industrialized country."

"We are going to create a healthcare system which provides quality care for all, not $100 billion in profits for the healthcare industry."

All politics aside, Sen. Sanders leaves us with some words of support that every person should take to heart:

"I want all of you to be thinking about running for office. You can do it! Whether its school board, whether its city council, whatever it may be... you can do it. Listen, I am a member of the United States Senate and if you think you don't know enough to run for local office, trust me, I know the US Senate... you know enough."