Interracial Dating Is The Big No-No In The Black Community

What’s with the double standard and the disconnect? 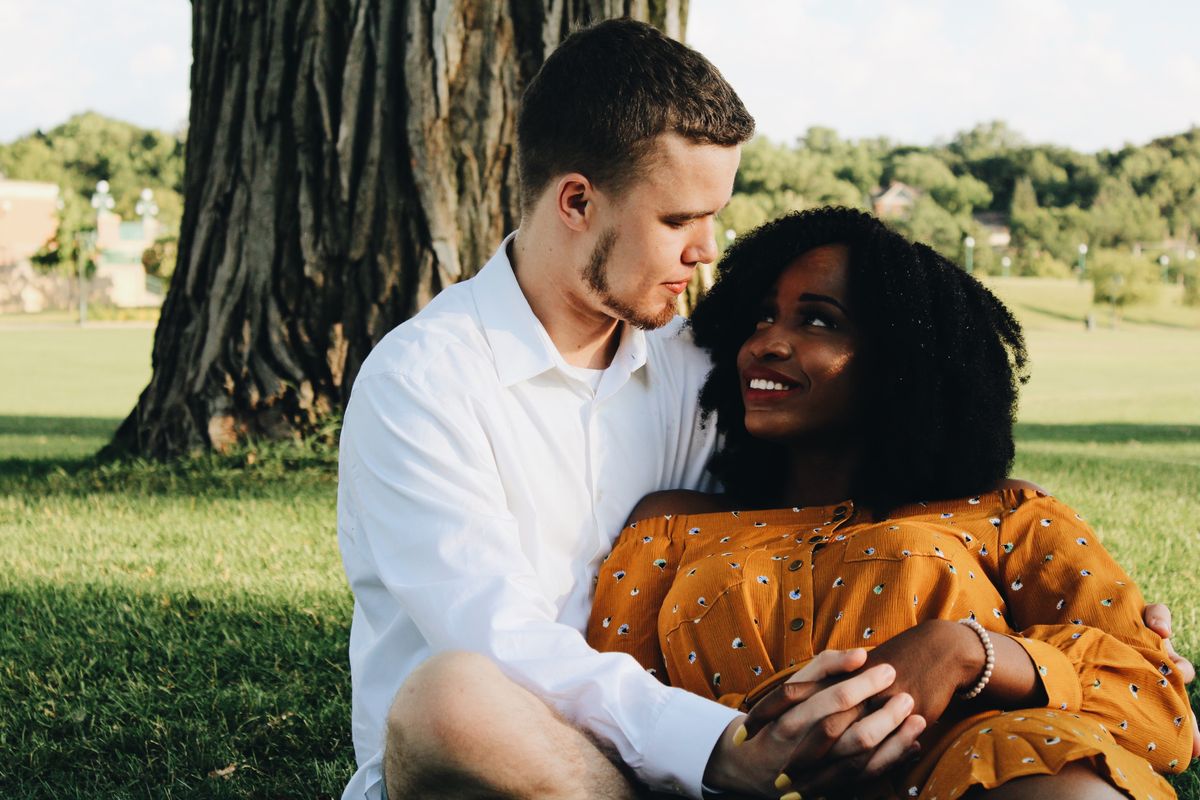 I recently came across a Facebook post asking Black people what they thought of a cartoon image depicting a Black woman in a relationship with a white man.

Initially, I thought it weird that someone would even ask a question like that, but after sifting through the comments, and I mean COMMENTS, it was clear that many people really did have thought-out and serious opinions about it. And to be honest, many were negative. But then it hit me. Even though I, personally, generally don't care about Black people dating interracially, I, as a Black woman, ABSOLUTELY saw where many of those people were coming from.

I imagine that if you were to ask a random Black person what they thought about interracial relationships in general, they'd say they were indifferent, but I think we've all noticed the *humpf* Black women often make when they come across a Black man in a relationship with a woman outside of his race. The infamous Black man and white women couple is often a center of conversation in Black groups, and I'm sure people on the outside have always wondered why? Most would just chalk it up to racism, but is that truly what it is and if so, where did that disapproval come from? We also often see a similar reaction from Black men when they come across a Black woman in a relationship with a white man. So, if it's okay for other people to date outside of their race, why isn't it okay for Black people? What's with the double standard and the disconnect?

Actress and talk show host Tamera Mowry-Housley has openly spoken out about the criticism she faces as the wife of a white man. Mowry-Housley herself is bi-racial as a product of an interracial relationship between her Black mother and white father. She has expressed that she and her husband often receive hateful comments coming from both the Black and white communities but has specifically been called a whore by those in the Black community.

Recently, I have even seen her described online as a bed wench and a mule.

Historically, during slavery in the U.S, the Negro bed wench was a Black woman on a plantation whose primary function was to sleep with the white Massa. Often times, in exchange for her sexual acts, the Massa would treat her more favorably than the other female slaves--exemption from working in the fields, for example.

Side note: If you haven't had a chance to watch "Underground," with Jurnee Smollett-Bell, DO IT! But I digress. . . .

It was also quite common for the Negro bed wench to be a lighter skinned or mixed woman. And because of the favorability she received, this woman would generally feel superior to the other women on the plantation.

Today, the term is generally used to describe behaviors one would associate with that of a female “Uncle Tom." And the "act" of being a Black woman in a relationship with a white man is seen as something someone complicit in the expansion of white supremacy would do.

Another reason we see such an adverse response to a relationship like this is because Black women who are not with a Black man are often looked at as weak. Now, if we are being completely honest here, white women are stereotyped as being the weakest of any group of people. So when a Black woman enters into a relationship with a white man, we are often looked at as not being able to "handle" the Black man, who is himself stereotyped at as the ultimate alpha male.

Mowry-Housley is not the only Black women in the media to be labeled as this. Serena Williams was a recent subject of the term after announcing her engagement to white boyfriend and Reddit co-founder Alexis Ohanian.

Now, there is another side to this.

Something incredibly destructive that has deeply manifested itself within the Black community is self-hatred. It is something that hard to talk about and gravely misunderstood. We see it everyday, but I think it happens to affect Black women and Black men differently.

There are many Black men out there who actually feel Black women are, and forgive me for being so blunt, generally ugly. And not just ugly, but uneducated, disgusting, and inferior.

Tiya Miles, a writer for the HuffPost suggests that for many Black men, the white woman is less of a partner and equal, but more of a big, shiny prize. "Because white women were taboo for black men for centuries in this country to the extent that black men could be lynched for the appearance of involvement with white women, access to white women may be more alluring for black men now."

Another question that comes up is, "does he really love her?" Many Black women can't help to think feel as though a great number of Black men choose to date outside of his race for superficial reasons. I myself have heard from Black men especially some variation of the statement, "I want a daughter with good hair," meaning of course,"I refuse to date a Black woman because I don't want my daughter to have hair like mine." I actually had a college roommate (a black girl) who openly admitted to me that the reason she didn't date black men was because she wanted a daughter with "good, curly hair." Statements like that also include the fact that many Black men (and women) want lighter skinned children because they perceive dark skin as unattractive.

Kodak Black semi-recently made a comment on an Instagram live stream that he didn't like Black girls, in a sexual way. When asked if he liked actress Keke Palmer, the rapper responded, “Keke Palmer, she straight. I'd bag her, but I don't really like black girls like that, sorta kinda." After a firestorm of backlash, the rapper attempted to "clarify" his statement by saying, "it's just not my forte to deal with a "dark skin" woman I prefer them to have a lighter complexion than me #MyPreference #FuckYou . . . You talking about black women. Bitch, fuck ya! I only like redbones. I love black African-Americans. But I don't like black bitches. I like yellow hoes."

The Black woman *humpf* can also be translated to "I wonder how he feels about his own mother."

Now, of course, none of this is to say that you can tell the intent of a relationship from the outside because you can't. And we all know what they say about those who make assumptions. I'd imagine the great majority of interracial unions are solely based on true love because I couldn't imagine a relationship lasting on anything less than that, but even so, there are still stigmas in the Black community that we have placed on ourselves and interracial relationships.

Now, the question that I don't know the answer to is, "is it up to us to change how we choose to view these relationships or will those stigmas wither away when we no longer live under the cloud of white supremacy?"